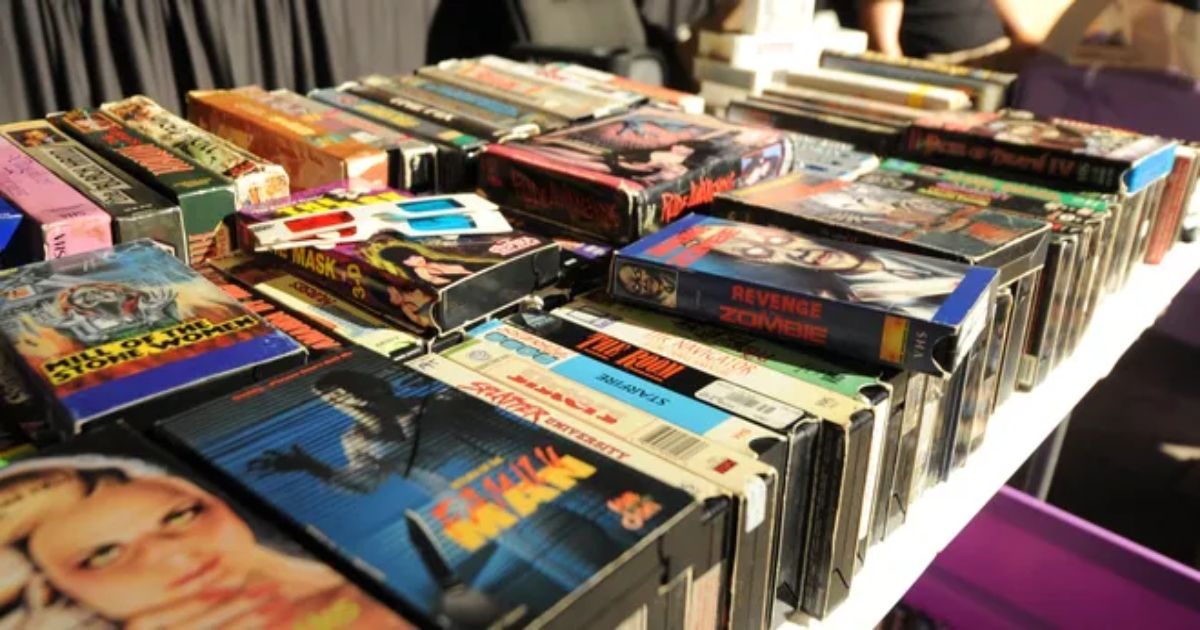 Before the age of “Netflix and Chill,” video stores ruled the rental domain, and one of the quickest ways to get a film noticed was by its cover. Horror films notoriously had some of the greatest cover art of all time and, like a Goosebumps book at a book fair, stood out among the rest. VHS covers for cult classics often get makeovers as the film is re-released on DVD, or if it’s a special anniversary year.

Scream Factory is the most notable for releasing new cover art for older films that are being released on 4K DVD. Despite upgraded imaging and streaming’s accessible platform, there is simply nothing better than holding a piece of physical media and getting a good glimpse at its cover art. Here are ten of the greatest horror VHS tape covers of all time.

Blood Diner is a 1987 horror comedy about two brothers who use a diner as a front in order to claim innocent victims. Their motivation stems from being commanded by the jarred brain of their serial killer uncle, who believes that their killings will resurrect an ancient God. The film has a notoriously poor rating, however, the cover art tells a completely different story. The eerie fog and full moon that ghost over the diner suggest that the film is much more alluring than it actually is. Overall, the plot does not live up to the cover, and the film itself could be one of the few 80s horror films that could benefit from a remake.

Related: Explained: The Fall of the Video Store Empire

Based on the cover alone, 1993’s Dead Alive doesn’t read like a zombie movie at all. Yet, underneath the skeleton lurks something more menacing and grim. Something that re-animates itself so it can feed. Lionel (played by Timothy Balme) hides his mother in his basement after she falls sick due to a bite from a Sumatran rat-monkey. Her repeated escapes cause Lionel’s neighbors to turn into zombies. All of which leads up to their attendance at a high profile party that Lionel’s uncle is throwing. The overall plot sounds almost as zany as the cover, yet Dead Alive sits at almost a 90% on Rotten Tomatoes with glowing critic reviews, and is considered one of the best zombie movies of all time.

John Carpenter is no stranger to horror, and is rightfully credited with directing one of the greatest horror films of all time, Halloween. His contributions to the genre continued into the 80s with Christine and The Thing, however, They Live takes on a much larger political tone. Anyone who went to a Blockbuster in the late-80s throughout the early-2000s probably remembers the VHS cover for They Live. Right down the back of the box, the themed sunglasses keep the tone that what you’re seeing through your own eyes isn’t what’s in front of you. Carpenter uses They Live to deconstruct ideology to its basic form.

Killer Klowns From Outer Space‘s VHS cover set the film aside from others on the shelf. The 1988 horror classic has gained a cult following since the initial release, and has seen a major resurgence in the last five years. The Killer Klowns have been a staple feature at Universal’s Halloween Horror Nights, and have been honored through animatronics via Spirit Halloween. Like many 80s horror movies, Killer Klowns From Outer Space reads more campy than scary by modern standards, but it is hard denying the creditability of the Chiodo brothers for their fun special effects and well written “kill” scenes.

The Howling is a werewolf movie from 1981 that is often overshadowed by An American Werewolf in London that was released later that year. After a traumatizing incident, Karen White (played by Dee Wallace) finds herself on a psychiatric retreat where she comes face to face with an apex supernatural predator. The Howling’s cover art is as allusive as most werewolf films go, seemingly waiting for the perfect moment to reveal the beast within. Yet, the torn fabric coupled with the long nails that look like a mix between human and animal, make it hard to distinguish whether the woman on the cover is the victim or the monster.

Related: In Defense of Movie Theaters

A Nightmare on Elm Street 2: Freddy’s Revenge has been regarded as the “gayest horror movie ever made” via Decider. Lead actor Mark Patton has spoken out on how the film impacted his career in Hollywood in Shudder’s Scream Queen! My Nightmare on Elm Street. The second installment to the Nightmare franchise has seen many different faces as far as cover art goes, and the most popular of which being Patton’s character Jesse seeing a different reflection in the mirror. However, Warner Brothers’ VHS cover of Freddy menacingly hulking over a rogue school bus takes the cake by far in terms of artwork goes for the horror sequel.

If only 1987’s The Video Dead had a plot that could live up to the cover’s awesome design. At first glance, the zombie flick’s synopsis appears to read like the back of an R.L. Stine Goosebumps book. However, the grotesque nature of the film delivers so much more. Despite the horrendous acting and overall 1980s cheese, this campy zombie movie is an overall fun watch on nostalgia alone.

3/10 The Return of the Living Dead

The Return of the Living Dead was the result of a dispute between John Russo and George A. Romero on how to handle the sequel to Night of the Living Dead. Russo went on to write a novel of the same name that would later be picked up by the film’s director Dan O’Bannon. The sequel serves the original in more ways than one, and refers to the original film as a “true story” although it is clearly not. Having a 1985 release date meant that the cover design would be marketed more towards the time, thus referencing the punk rock zombies spray-painting a tombstone. The Return of the Living Dead is another 80s classic that reached cult fandom with the recognition wildly deserved.

Chopping Mall arguably has one of the most memorable covers in horror. Insider calls the 1980s “the mall’s golden age” and it truly was. Consumerism was at an all-time high, and shopping malls were the place to be. Chopping Mall turns the American Dream into a grim reality when security robots designed to prevent robbery start attacking retail workers after a lightening storm. The film was released in the late-80s, nearly four years after Poltergeist. However, both films strive to comment on American socioeconomic standards and consumerism. Chopping Mall’s visual effects definitely don’t hold up as well as the cover, but it makes the perfect horror popcorn flick.

Fright Night holds up, both in its practical effects and plot. Yet, one of the most alluring aspects of the 1985 film is the cover art, which features a vampire’s face in the clouds over a suburban home. Chris Sarandon plays Jerry, a seemingly normal neighbor who is actually a vampire that is luring women all over town into his home. Director Tom Holland not only translates vampire lore into a new story, but keeps intact all the classic tropes that Dracula introduced. Jerry Dandrige is more menacing than Dracula or Nosferatu because he hides right under your nose appearing as the seemingly innocent, handsome neighbor living in suburbia. Fright Night takes home the gold for best VHS cover of all time.