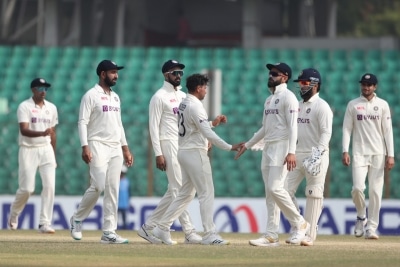 Dhaka, Dec 21 A confident India side will be aiming for a clean sweep in their Test series against Bangladesh when the two teams meet for the second and final match, starting on Thursday at the Sher-e-Bangla National Cricket Stadium, here.

After a comprehensive victory of 188 runs over Bangladesh in the first Test at Chattogram, where many players helped them seize the key moments, India were also helped by South Africa’s two-day loss to Australia to now be at second place in the ICC World Test Championship (WTC) standings.

Another victory in Dhaka will cement their second-place standing in the Championship points table, behind toppers Australia and India have a lot of reasons to be optimistic about the same.

Cheteshwar Pujara made 90 and 102 not out in both innings, while Shubman Gill registered his maiden Test century and Rishabh Pant set the base for a counter-attack with a quick 46. Shreyas Iyer and Ravichandran Ashwin also did a crucial job with the bat and India would want captain KL Rahul to be among the runs too.

Left-arm wrist-spinner Kuldeep Yadav had a great all-round outing on his return to Tests after 22 months, taking a five-fer in the first innings and chipping in with a career-best 40 with the bat.

Right-arm pacer Mohammed Siraj’s opening burst in the first innings and left-arm spinner Axar Patel picking up key scalps in the second innings were other notable contributors with the ball, especially after India were wicketless in the opening session on day four.

With the Dhaka pitch traditionally favoured more towards assisting spinners, India’s spin troika of Kuldeep, Axar and Ashwin will have more responsibility and workload with the ball, with Siraj and Umesh Yadav to be in handy supporting acts.

Bangladesh, on the other hand, will be pleased with batting performances of debutant opener Zakir Hasan, who made an attractive 100 in the second innings and skipper Shakib Al Hasan making an attacking 84.

But the hosts’ were left badly hurt after being rolled over for just 150 in the first innings and let of the advantage of reducing India to 48/3 in the first day of the match. Litton Das, Mushfiqur Rahim and Najmul Hossain Shanto, who made 67 in the second innings, will have to step up more with the bat if Bangladesh are to put a collective effort in Dhaka.

With the ball, Shakib should be fit enough to bowl after not rolling his arm over in India’s second innings. With Ebadot Hossain out due to injury, Taskin Ahmed should take his place in the eleven after the right-arm pacer himself missed the first Test due to back injury.

Overall, it should be an interesting contest between a team high on confidence and a side who have been inconsistent at home.