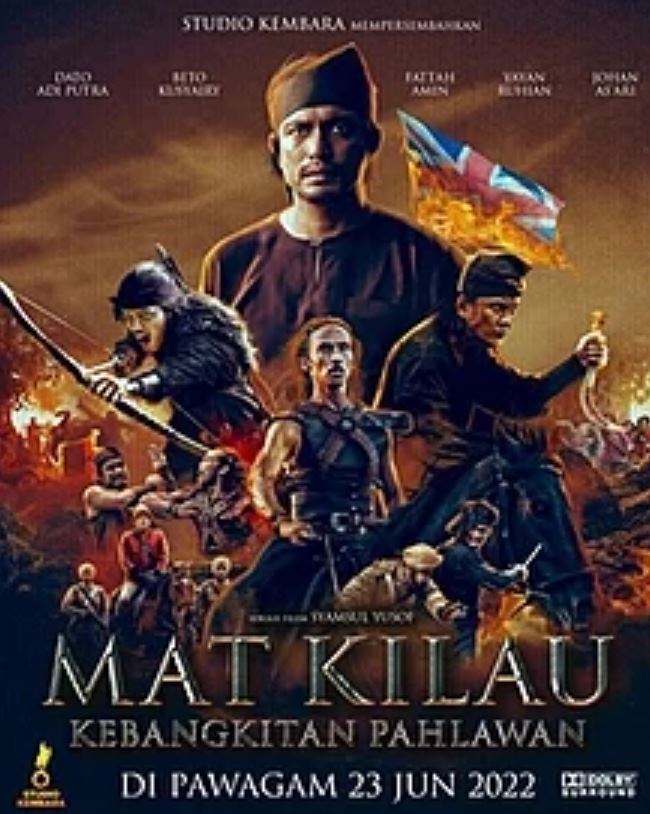 Mat Kilau, a Malay patriotic film, is now available on Netflix. The movie is full of exciting battle scenes in which the villagers struggle for their independence from British colonialism; nevertheless, it also raises a lot of issues. The film was directed by Syamsul Yusof, and it features a cast that includes Adi Putra, Beto Kusyairy, Fattah Amin, and Yayan Ruhian, amongst other actors and actresses.

The Malaysian historical figure Mat Kilau, who fought against British colonists in Pahang prior to Malaysia’s independence, serves as the inspiration for the storyline of the film.

The following is what the movie’s synopsis reads on Netflix:

A LEGENDARY WARRIOR LEADS HIS PEOPLE INTO GUERILLA WAR AFTER BRITISH ARMIES INVADE PAHANG IN ORDER TO PROTECT THEIR HOME FROM THE RISK OF COLONIZATION.

This review of Mat Kilau contains some light plot details.

As is the case with the majority of films with a patriotic theme, Mat Kilau begins by depicting the atrocities committed by the colonisers toward the indigenous people of the country. An English officer armed with a gun who is merciless in his actions; the soldiers surrounding him obey each and every order that is issued by the officer.

Because it is difficult to finish these kinds of films without include elements that are likely to enrage the audience, the movie includes contentious characters like selfish traitors, jealous subordinates, political intrigue among the nobles, and so on.

Coming back to the fact that the men encircling him are Sikh soldiers, this has caused people of the community to scrutinise the movie, and it also gives the impression that it is not doing honour to the actual historical events that took place. In light of this, although the movie is tailored to the preferences of the Malay audience, it is possible that it does not do the same for other audiences.

The hero of the story goes up against British forces while trying to inspire the people around him to share his passion for the cause throughout the course of the film. In addition, I feel obligated to point out that the parts that featured Malaysian martial arts were not only remarkable but also really enjoyable to watch.

The movie will most assuredly excite the audience in Malaysia to feel a surge of patriotic fervour, and it will also be a joy for viewers in other countries. On the other hand, it will also be criticised for having problematic aspects, such as the inclusion of Sikh warriors and distorted historical facts.

For the most part, this is an entertaining piece of work that deals with historical personalities but also deviates from the truth for the sake of the film. However, it is difficult to say the same about the plot itself because the battle scene will be well-liked due to the fact that their style of martial arts is distinct from what we typically see.

The ending isn’t very satisfactory and feels more like a horrible cliffhanger, which suggests that it was written with a possible sequel in mind.

If you are in the mood for a patriotic film and can look beyond a few minor flaws, this film is an enjoyable one to see and is an excellent choice for those individuals. However, it is not a film that everyone needs to see.

The movie has left me with conflicting feelings, and while I don’t want to offend anyone, I think it’s best to pass on seeing it.

What did you think about Mat Kilau? Share your thoughts with us in the section below!

The events of the novel take place in 1892, when the lands of Pahang were still under the control of the British colonial government. This was three years before the Federated Malay States were established.

Mat Kilau, a Malay warrior, along with his father, Tok Gajah, and his friends, fought vigorously against the British administration in order to protect Pahang, his homeland; and Malaya and liberate it from further occupation. In doing so, they were motivated by the desire to defend Pahang as well as Malaya.

The British were put in a position where they were subject to conflict and pressure when Mat Kilau and Tok Gajah devised a cunning strategy of resistance, which ultimately resulted in a brutal struggle.

Mat Kilau: Kebangkitan Pahlawan is a 2022 Malaysian biographical historical epic film directed by Syamsul Yusof and starring Adi Putra as Mat Kilau bin Imam Rasu, a Malay warrior who fought the British colonialists during the Pahang Uprising in Pahang, British Malaya prior to independence. The film is also known as “Mat Kilau: The Rise of a Warrior.” Beto Kusyairy, Fattah Amin, Yayan Ruhian, Geoff Andre Feyaerts, and Johan As’ari are among the actors who appear in the film in supporting roles.

The film is set against the backdrop of the year 1892, which is the time period in which the Pahang territories were governed by British colonial rule. It was Rahman Dali, Shahruddin Dali, and Yusof Haslam who were responsible for producing the movie. The shooting started in 2018, and it supposedly wrapped up in 2021. Both Studio Kembara Sdn Bhd and Skop Productions Sdn Bhd were involved in the film’s production as co-producers.

The movie was a smash hit at the box office. The movie had a production budget of RM8 million, but it ended up collecting RM96 million after only 40 days in theatres, making it the Malaysian film with the greatest grossing career of all time.

At the KL Special Force film gala that took place in Petaling Jaya on March 8, 2018, Syamsul made the announcement that he would be directing a historical biographical film about Mat Kilau, a Malay warrior who fought against the British administration in Pahang. The film will focus on Mat Kilau’s life.

The first day of official filming for the movie was April 1, 2018, although production had to be halted for a while due to a number of issues that could not be avoided. Adi Putra, a Singaporean actor, portrays the part of Mat Kilau in the series. Syamsul claims that Adi was selected for the role of the main character because he was capable of animating the character and because Syamsul was certain that Adi, as an accomplished actor, would carry the character successfully.

The true cost of completing the movie was revealed to be RM8 million on May 15th, 2022. The date of this revelation was May 15th, 2022. A total of one hundred days were spent filming the movie, and while some of it was shot in the state of Perak, additional scenes were also shot in Pahang, Melaka, and Selangor.