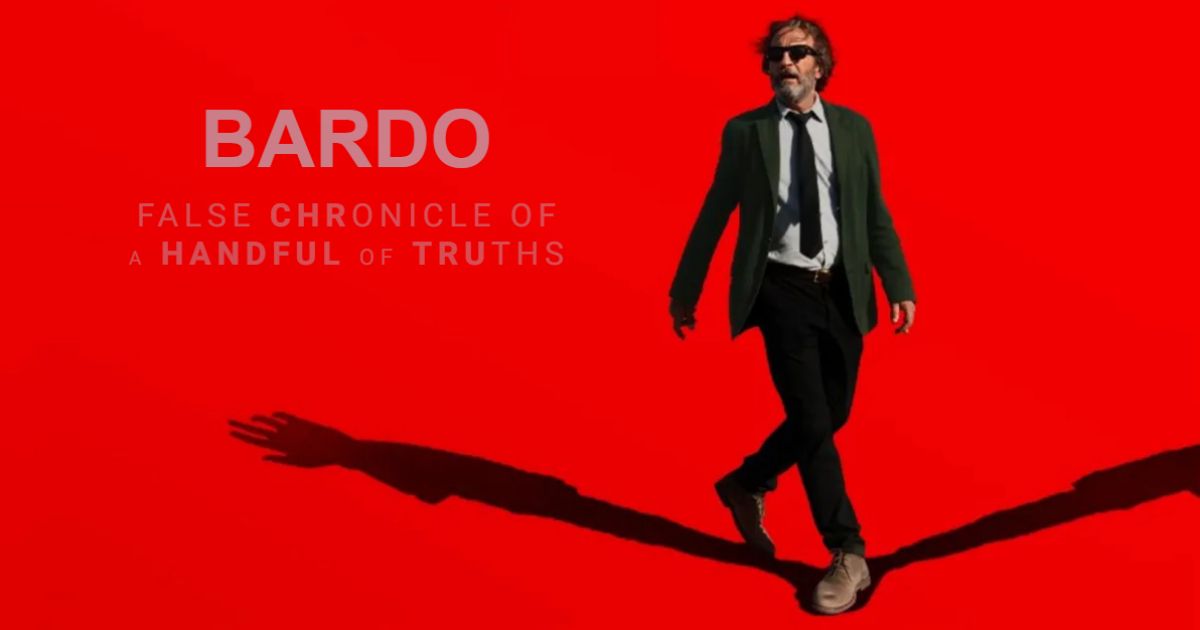 A Self-Indulgent Movie About Success, Failure, and Identity

Sitting at the BFI London Film Festival, legs crossed, hands placed together, leaning forward enthusiastically, is director Alejandro G. Iñárritu giving a talk on his career in film and his new movie, Bardo, False Chronicle of a Handful of Truths, a cinematic return to his Mexican roots for the first time since 2002’s Amores Perros. He is the epitome of poise, occupying this total state of equilibrium and confidence in his own ability as a filmmaker. No hint of nerves while seated in front of a few hundred spectators, despite being about to launch his most ambitious, self-indulgent project to date. Bardo is a semi-autobiographical account of his life, played through the medium of the central protagonist, Silverio Gaucho (Daniel Gimenez Cacho), a journalist-turned-documentarian.

Bardo is as much of a love letter to his (Iñárritu’s) motherland, Mexico as it is a letter of forgiveness, expounding the reasons for his departure two decades earlier. Silverio, Iñárritu’s stand-in and a man with an uncanny resemblance to the director himself, is in the midst of an existential crisis. A man seemingly lost in the heartless world of American capitalism, disillusioned by this stark lack of belonging and an absence of (and yearning for) a national identity.

He’s lost property that nobody wants to claim. The Americans don’t want him, and the Mexicans haven’t forgiven him for leaving. As a highly-regarded and lauded filmmaker, Silverio is in line for award recognition, a prize only usually gifted to Americans. It’s a moment that is meant to provide external validation, a celebration of his accomplishments in film. Except, the mounting of this career-high summit instead highlights his self-diagnosed inadequacies as a person, rather than his critical success as a documentarian.

Upon leaving Mexico, reassuring himself that his intentions are pure, Silverio expresses the burning problem of his home country being a hive of cartel activity, to which the response is “but the most dangerous cartel of them all, is the corporate cartel of the U.S.” Silverio is a man trading for the drug barons of American corporations and studios for the gringos, in the crosshairs of the cartel warfare of multinational conglomerations of the U.S.

Ostensibly loved (but secretly berated) by his Mexican contemporaries, Silverio is factionless. There is a poignant scene when he and his family returns to LAX and have their American citizenship questioned by a border control official. “You don’t have the right to call America your home, you’re on an O-1 Visa,” he says to an increasingly mortified Silverio, who protests his right to call Los Angeles his home.

Silverio’s Mexican counterparts, especially his former colleagues, clearly take issue with the condescending tone of his documentaries toward Mexico as a country. There is this belief that, via representations of cartel culture and cultural issues experienced by his home nation, Silverio somehow glorifies and pimps out these conceptions to the “gringo” masses. In a particularly heated scene with a disgruntled former co-worker, the hotshot Mexican chat show host rebukes Silverio for bailing out on his program at the 11th hour, labeling him an egotistical sell-out.

Bardo is a Cinematic Epic

The unrestrained self-indulgence aside, make no mistake, Bardo is a film of epic proportions. It’s a supremely impressive piece of filmmaking, a kaleidoscopic hallucination full of these emblematic symbols from the director’s life and from his thoughts and fears. It’s a movie that doesn’t make sense, then becomes comprehendible, and then doesn’t make sense again.

Bardo is unmistakably Iñárritu, with his sprawling wide-shots, sweeping long takes, and his trademark, extreme low-angle close-up, ever-present in the likes of The Revenant, Birdman, and Biutiful. It is a movie that cherishes the freedom of artistic expression in film, and Iñárritu, one of the greatest cinematic ‘artistes’ of them all, produces a compilation of delightfully atmospheric shots and moving, heartfelt imagery such as the touching scene of Silverio surrounded by the missing, dead, and forgotten corpses of Mexico that have fallen victim to crime.

We are taken on this dream-like, personal journey of self-discovery, brutal self-reflection, and the ultimate form of soul-searching. Bardo is a film built on a sort of satirical existentialism, but there is no getting away from the fact that it is an exercise in self-indulgence, and to a certain extent, narcissism. It is Alejandro G. Iñárritu laying his character bare, assembling all of his shortcomings, achievements, and torments in an attempt to make sense of them all; one mammoth-sized therapy session as the world watches on.

At times, the movie is this weird, amalgamated fusion of hallucinatory images and life events that seem to have been taken from Iñárritu’s own experiences. For all of its aesthetic brilliance, it is certainly a shame that this will only be receiving a limited theatrical release before premiering on Netflix next month, as Bardo, False Chronicle of a Handful of Truths is a film made for the big screen, and could very feasibly get lost in translation.