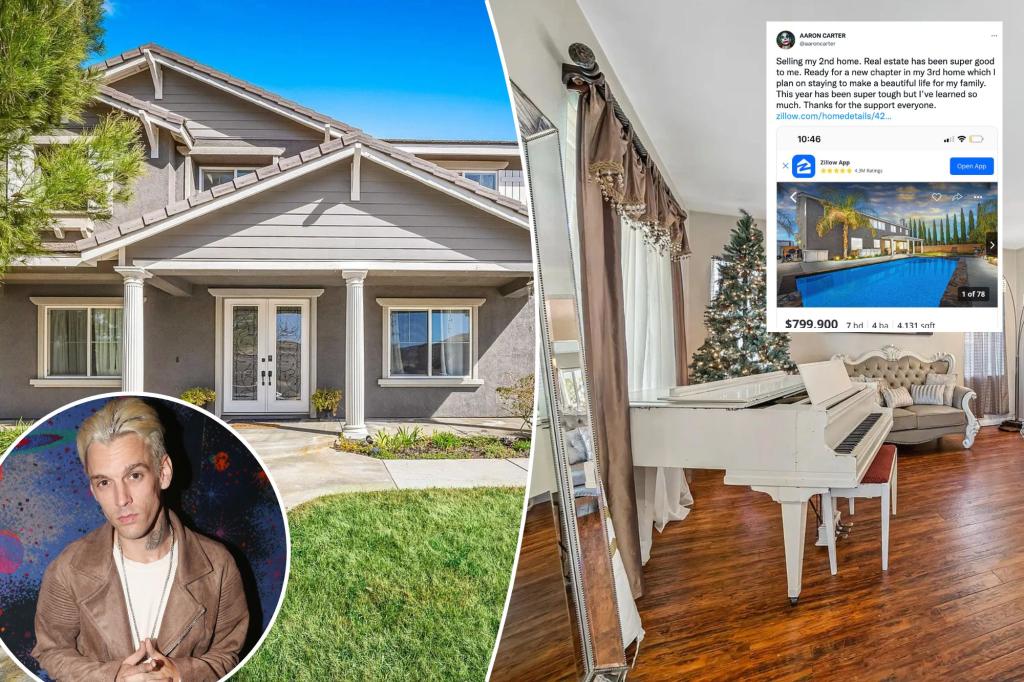 Days before Aaron Carter’s death, he teased that his California home, where his body was discovered on Saturday morning in the bathtub, was up for sale.

“Selling my 2nd home,’ Carter, 34, wrote in a tweet last Saturday, Oct. 29. “Real estate has been super good to me. Ready for a new chapter in my 3rd home which I plan on staying to make a beautiful life for my family.”

“This year has been super tough but I’ve learned so much,” he added. “Thanks for the support everyone.”

But it looks like he never got the chance to buy his third home.

“Deputies responded to the block of Valley Vista Dr to Aaron Carter’s residence at 10:58 am [PST] this morning,” Los Angeles County Sheriff’s told The Post in a statement, adding “they did locate a deceased person.”

Lori Graf, manager of Aaron’s older brother, Nick Carter, told The Post in an email, “Aaron has passed.” TMZ reported that the troubled child singer was discovered in the bathtub of the home.

A cause of death has not yet been released.

Aaron, who has struggled with drug addiction, had purchased the seven-bedroom, four-bathroom Lancaster property in November 2020 for $620,000, records show.

He then listed the home for sale three months later. The residence has glided on and off the market since.

According to the listing’s description, the home is surrounded by palm trees and features a kitchen with a breakfast bar, granite countertops, and a large walk-in pantry.

Amenities include a primary suite with a sitting room and fireplace, and a large outdoor patio, pool and spa.

“The interior of the home features much sought after Amenities such as laminate flooring, upgraded light fixtures, recessed lighting, vaulted ceilings, large picture windows, and custom interior paint,” the description of the home states.

Carter started his career opening for the Backstreet Boys, Nick’s band, on their 1997 tour.

At just 9 years old, he released his first self-titled debut album, which sold a million copies, that same year. He went on to open for other major acts including Britney Spears.

Aaron quickly shot to stardom in the late ’90s, selling millions of records with pop hits like “I’m All About You,” “I Want Candy,” and “Aaron’s Party (Come Get It).”

In July 2017, Carter was busted on DUI and marijuana charges in Georgia while in a car with his then-girlfriend, Madison Parker.

A judge dismissed the case last year, but he was placed on probation for 12 months, had to complete 40 hours of community service, attend DUI risk reduction classes and be subjected to a drug and alcohol evaluation.

He was also made to pay approximately $1,500 in court fees and fines.