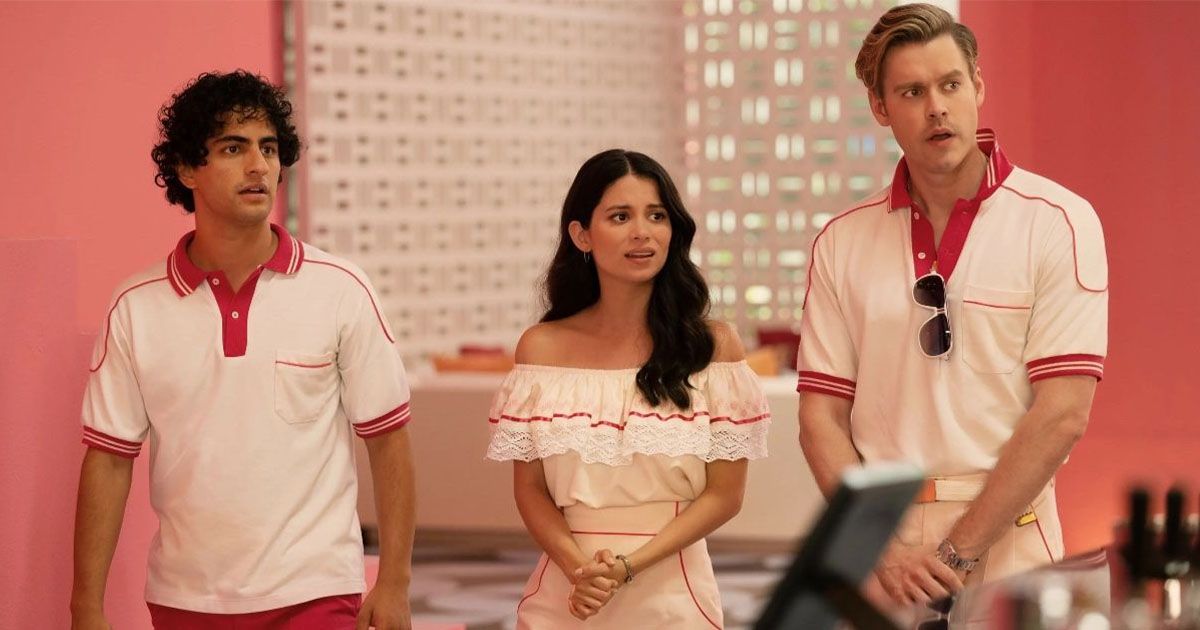 In an era where real-life grit (Dahmer – Monster, The Dropout, The Staircase) vie for streaming attention, what a joy it is to experience something like Acapulco. The critically acclaimed bilingual comedy Apple TV+ series is sunshiny good. A young fella with big dreams and an even bigger heart. A love triangle. A ritzy Acapulco resort. What’s not to like?

Season Two of the global hit partly set in the 1980s drops Oct. 21, and series stars Camila Perez (A Teacher) and Chord Overstreet (Glee) are jazzed about what’s in store for viewers.

“A lot of things happen in Season Two,” said Overstreet, who plays resort worker Chad in the series. “But my favorite part is that there’s so many different individual journeys you go on through the lens of the main character [young Máximo]. Season Two definitely bounces around a lot, and you learn so much about everybody in Máximo’s world. I also like that there’s a lot of new relationships, a lot of new dynamics that are great for laughs.”

Perez plays Julia, who accepted Chad’s marriage proposal at the end of the first season yet can’t fight the mutual affection she shares with Máximo (Enrique Arrizon).

“I already expected Season Two to be funnier, bigger, and sweeter, just because we got to know the writers,” she said. “They are so talented. I was very impressed by the new characters they brought to the table this season. There are more interactions between previous characters that I didn’t really expect. I feel like everything landed, and it’s just funnier, bigger, and loud. I’m really excited for everybody to watch it.”

What Happens in Season Two?

The sweet nostalgic comedy brings back the ever-endearing Eugenio Derbez, who also serves as executive producer—Derbez celebrated a SAG Award last year as part of the ensemble cast of the Apple original film CODA.

There’s a bit of brouhaha at the resort this time around, a few hiccups on the homefront, and—clutch your heart—a new love interest for the ambitious guy? She may rival the girl of his dreams (Julia). Meanwhile, under Don Pablo’s (Damián Alcázar) guidance, Máximo sets his eyes on one day running Las Colinas, becoming boss Diane’s (Jessica Collins) go-to guy.

“What I’d love people to know is how well the show translates, going beyond the language barrier,” Overstreet said. “We don’t talk about that enough. When you think bilingual [show], you think it might be a little bit hard to track, but Acapulco is the opposite. You don’t even realize you’re reading subtitles while you’re watching the show, which is cool. And it’s kind of done in an effortless way. Which was shocking to me because I haven’t seen a lot of bilingual shows.”

“I agree with that,” Perez added. “This a feel-good show—very sweet and beautiful—and the perfect show for where we are right now. There’s so much happening around us [in the world now] and this is a show that just makes you laugh. You can view it with your family. It’s comedy. Who doesn’t want to watch comedy?”

A Story That Keeps on Going

Hailing from Lionsgate Television, Acapulco is inspired by 3Pas Studios and Pantelion Films’ box office hit How to Be A Latin Lover, which also starred Derbez. Chris Harris serves as showrunner for the series. Collectively, the creative team gives all the actors plenty to work with. For Perez and Overstreet, playing characters with big dreams—and a couple who can’t seem to find their internal rhythm—has been downright rewarding.

“Just reading the script, it felt really close to me—energy-wise,” Overstreet said of his role. “It was kind of a sweet spot for me where I could have fun. There’s plenty in the show that welcomes a lot of play. You can kind of step out of yourself a bit.”

“I love how fearless Julia is in terms of her career,” Perez noted. “She’s very confident in what she brings to the table, and in terms of what she wants with her designs. She’s building this relationship with [boss] Diane and the fact that she can go into Diane’s office all the time and say, ‘Hey, this is what I have to offer; this is what I want…’ I think that’s very courageous. I admire that about her. I admire how disciplined she is. But when it comes to love, she’s still learning, as we are. She’s a young girl.”

Acapulco is sprinkled with heavy doses of big dreams and high hopes. Going into Season Two, Perez hopes viewers walk away with a positive message: “To love harder, to be more honest with yourself, to be present, to love your family, and to have an understanding of everybody’s journeys.”

She grinned. “And to watch the show over and over again, so we can go into a third season.