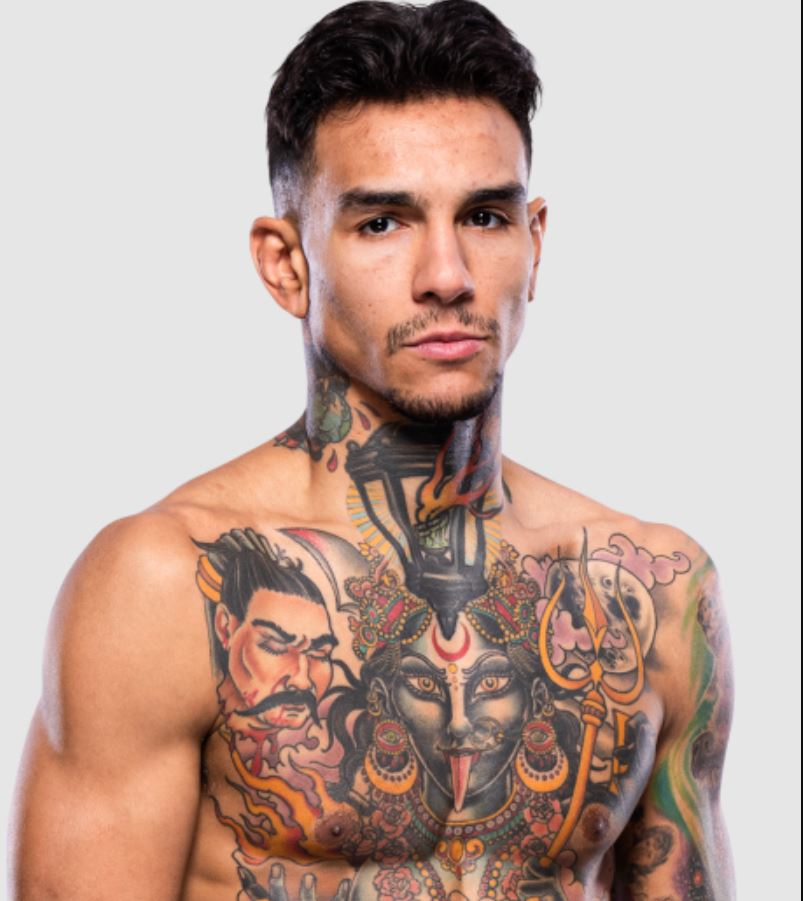 Andre Fili and Melissa Renee’s relationship history in the UFC

Andre Riley Givens, better known by his mma ring name Andre Fili, is an athlete who competes in mixed martial arts and is presently contracted with the Ultimate Fighting Championship. He fights in the featherweight category of the competition.

On December 12, 2009, the UFC fighter made his professional debut against Anthony Motley. This event occurred more than a decade ago. His first match, which Fili won via technical knockout. His professional mixed martial arts record includes 21 wins, nine defeats, and no draws.

At UFC 166, which took place on October 19, 2013, he made his debut in the organisation, competing against Jeremy Larsen. The UFC fighter finished the contest in round 2 with a knockout or technical knockout victory. On Sunday, September 18, 2022, Fili is scheduled to compete against Bill Algeo.

Melissa Renee is a businesswoman and a fitness enthusiast. She is dating the American professional UFC fighter Andre Fili, who hails from the United States.

She is the proprietor of a fitness centre called Fit Within, which offers individual and group exercise sessions. Renee is very passionate about maintaining a healthy and active lifestyle. Every single one of their Instagram feeds is almost entirely taken up by videos and photographs of her working out and showing off her toned figure.

It’s likely that the fact that they both have an interest in working out and staying fit contributed to the chemistry that they share in their relationship. The fact that Fili and Melissa have so much in common facilitates the continual development of their connection.

In conjunction with her workouts, she consumes wholesome superfoods that are packed with all of the essential elements. In most cases, she steers clear of food that is devoid of nutritional value. Her Instagram highlights include photos of several healthy meal options that she has prepared.

The MMA fighter’s girlfriend is someone who maintains a positive outlook on life. The fact that she has a specific highlight next to her profile photo that says “Addicted to bettering myself” says a lot about her mentality. The highlight includes a variety of inspirational quotations.

In 2016, Melissa and the UFC fighter began a romantic relationship. On May 12, 2022, the couple celebrated their sixth wedding anniversary with a party. On the occasion of their sixth anniversary this year, Fili commemorated the occasion by posting two separate photo carousels to Instagram.

“Celebrated 6 years together with @melissaloha,” she wrote on her Instagram. We have emerged stronger each time from the challenges and setbacks we have faced. I can’t wait to see what the future has in store for me. I am grateful to everyone and everything. Thankful for everything,’ the mixed martial arts fighter wrote in his post.

In addition, there is no access to specifics on their initial encounter. Despite this, we have high hopes that they will spend their golden years together. There hasn’t been any indication found so far that they are planning to be married anytime soon.

Andre “The Dragon” Fili’s Romantic History in the UFC

Regarding the timeline of the romantic relationships of the UFC fighter Andre Fili, the specifics of his past relationships with women prior to beginning his relationship with his present companion Melissa Renee are still unknown.

There is a lack of information regarding his former partners and the timeline of his relationships up until this point, with the exception of some scant details about his current connection. It is one of the topics that garners the most attention from internet users.

Citizens of Cyberspace speculate that he must have had at least one other partner before to Melissa.

Regardless of this, the fact that there is a lack of facts that can be trusted renders the speculation nothing more than an unjustified fake. The specifics of Fili’s romantic life have not been revealed as of yet.

Despite the fact that they have both been through painful breakups in the past, the stunning couple is completely smitten with one another. The two people routinely express their gratitude in posts that they share across all of their social media sites.

Learn More About Andre Fili’s Family, Including His Father and Mother

When it came to Andre Fili’s family, the UFC fighter didn’t have the healthiest of situations at home. He spent his childhood in a home that was frequently tumultuous and dangerous.

Because of his troubled upbringing, Fili gravitated into confrontations and fights when he was a youngster. The UFC fighter Andre Fili’s parents had a violent relationship with each other, which they also displayed toward their children, including Andre and his brothers.

Since Fili’s father was absent from the home for the majority of his childhood, his mother was responsible for the entirety of their upbringing. According to the reports, he served time in jail on more than one occasion. The years spent growing up and playing as a child for Fili were not happy ones.

To this day, the whereabouts and identities of his parents are unknown to the general public, along with other specific circumstances concerning his family history. It would appear that he makes a conscious decision to keep the facts of his family private in public.

To continue with the discussion of Fili’s family, he has a sister who goes by the name Alesha Fili. Other than that, the identity of her other sibling has not been revealed as of this day.

On December 12, 2009, Fili competed for the first time in a professional bout against Anthony Motley. The technical knockout was how Fili won the fight, and it was also how he won his next three fights. In his first fight, against Strikeforce veteran Derrick Burnsed, Fili sustained a knee injury that led to his defeat. After suffering the setback, Fili came back stronger than ever, winning his next eight fights, one of which was against Strikeforce veteran Alexander Crispim.

Fili made his promotional debut on October 19, 2013 at UFC 166 against Jeremy Larsen. Fili, who was in the middle of a training camp for a welterweight bout in another promotion, took the featherweight fight on short notice (two weeks) to replace an injured Charles Oliveira. The bout was contested at a catchweight, as Fili was unable to make the required weight. Fili won the fight via TKO in the second round.

Fili was expected to face Sean Soriano on September 5, 2014 at UFC Fight Night 50. However, Fili was forced from the bout with an injury and replaced by Chas Skelly.

Fili faced Godofredo Pepey on March 21, 2015 at UFC Fight Night 62. He lost the fight via submission in the first round.

Fili was expected to face Clay Collard on September 5, 2015 at UFC 191. However, Fili was forced out of the bout with injury and replaced by Tiago Trator.

Fili faced Gabriel Benítez on November 21, 2015 at The Ultimate Fighter Latin America 2 Finale. He won the fight via knockout in the first round and also earned a Performance of the Night bonus.

Fili faced Yair Rodríguez on April 23, 2016 at UFC 197. Fili lost the fight via knockout in the second round.

Fili faced Hacran Dias on October 1, 2016 at UFC Fight Night 96, filling in for an injured Brian Ortega. He won the fight via unanimous decision.

Fili was expected to face Doo Ho Choi on July 29, 2017 at UFC 214. However Choi pulled out of the fight and was replaced by promotional newcomer Calvin Kattar. Fili lost the fight by unanimous decision.

Fili faced Dennis Bermudez on January 27, 2018 at UFC on Fox 27. He won the fight via split decision.

Fili faced Myles Jury on February 17, 2019 at UFC on ESPN 1. He won the fight by unanimous decision.

Fili faced Sheymon Moraes on July 13, 2019 at UFC on ESPN+ 13. He won the fight via knockout in round one. This win earned him the Performance of the Night award.

Fili faced Charles Jourdain on June 13, 2020 at UFC on ESPN: Eye vs. Calvillo. He won the bout via split decision.

Fili faced Daniel Pineda on June 26, 2021 at UFC Fight Night 190. Early in round two, Fili accidentally poked Pineda in the eye and he was deemed unable to continue. The fight was declared a no contest.

Fili was scheduled to face Lando Vannata on September 17, 2022 at UFC Fight Night 210. However, Vannata was forced to pull from the event due to injury and was replaced by Bill Algeo.

What is Andre Fili’s Age?

What Is Andre Fili’s height?

What is Andre Fili’s pro-MMA record?