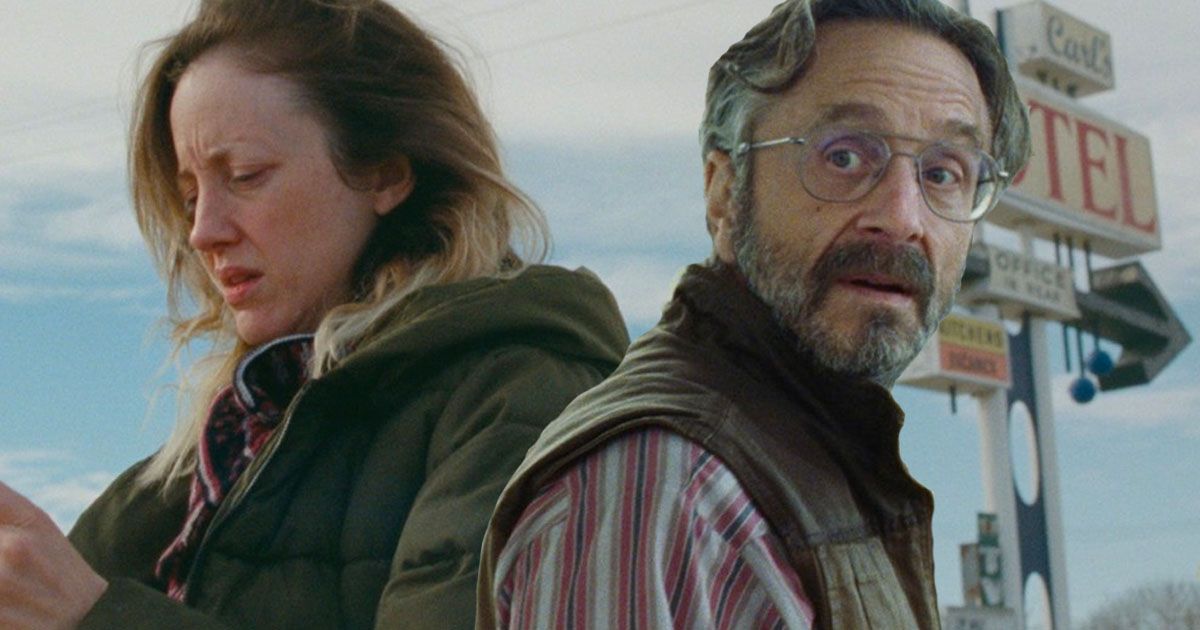 Andrea Riseborough and Marc Maron Discuss the Making of To Leslie

Leslie (Andrea Riseborough) is a single mother in Texas who blows a chance at a good life by rushing through money and alcohol after she wins the lottery. She’s been on the run from the heartbreak she’s caused her friends and family, but with no place left to go, she’s forced to return to them and further ostracizes herself when they realize her addiction to alcohol is as strong as ever. Her son (Owen Teague) kicks her out and her friends Nancy and Dutch (Allison Janney, Stephen Root) do the same. Leslie is left sleeping on the streets in palpable scenes that illustrate her disease.

One night she sleeps behind a dingy motel that Sweeney (Marc Maron) works at. He finds her in the morning and rushes her off the property. Flooded with embarrassment, Leslie forgets her bag of clothing behind the motel. When she later returns to retrieve it, Sweeney takes a chance on her and offers her employment and a room.

Andrea Riseborough and Marc Maron in To Leslie

“I think I was sort of grounded in my humility, whatever in my past that happened, which you get a little piece of during conversations with Andrea, that has put him in this place… he’s chosen to take Leslie on in terms of trying to offer her a new chance. He doesn’t have a lot of power in his life, but he could do that, and I think it’s all surprising about the depth of the relationship as it becomes something more… I think he’s grounded in a certain empathy and a pain of experience, and there’s a lightness to him at times, and he’s able to provide it to the whole movie,” commented Maron on his character Sweeney and how he acts as a sense of relief both directly to Leslie and comedically to the heavy subject-matter in the film.

Maron can be recognized for his prolific career as a comedian with numerous stand up specials on Netflix and credits in television and film including projects like GLOW with Alison Brie, his own series Maron, Mike and Dave Need Wedding Dates, and the list could go on. Although prominently appearing in comedies, To Leslie was an opportunity to prove that drama is in his range as an actor, which he certainly does. Riseborough, having played roles in Birdman, Waco, and more, also demonstrates her prowess, delivering a performance that strikes to the bone.

“It’s such a lonely place, psychologically, to play a character like Leslie,” said Riseborough, “once you emerge from it, you feel very much like some sort of rebirth, or a huge catharsis… I was sort of sick with the emptiness of addiction and all its by-products.”

“As both a character and as an actor, there was something of wanting to support her and be there for her. I knew that Sweeney was that guy, and I was that guy as well. It all kind of came together like that,” added Maron.

Related: Exclusive: Sigourney Weaver on Balancing Drama and Comedy in The Good House

Morris is also known for many projects prior To Leslie, including directing episodes of Better Call Saul, 13 Reasons Why, and House of Cards, to name a few. He actually worked with Riseborough in the past and called in a favor from Chelsea Handler to get Maron involved.

“Michael had received the script I think three years before we made the film. So, it’s something that had been brewing for a while. Michael and I had worked together on Bloodline, and he’d been my beacon on that production… he was just such a rock, being able to retain this huge sprawling narrative in his head… and so we really developed a sort of director-actor relationship during that process and very much wanted to work together again,” said Riseborough.

“I’m not really asked to do these kinds of roles,” said Maron, “a Texan who is humbled, quiet, and heavy-hearted. Usually I’m the aggravated cranky guy with the good heart. But he just kept bothering me,” he laughed. “He got Chelsea Handler to start texting me… you can’t say no to Chelsea Handler because that’s a problem that you’ll probably regret. So, I talked to Michael, and he seemed earnest… and he thought I could bring something to this… I also knew if I wanted to continue acting, that I need to take chances and take risks. So, I agreed to do it. It was an interesting challenge for me and I feel pretty good about it, and I was able to work with one of the best actors of our generation, Andrea Riseborough.”

Momentum Pictures will release To Leslie in theaters and on VOD on October 7, 2022.