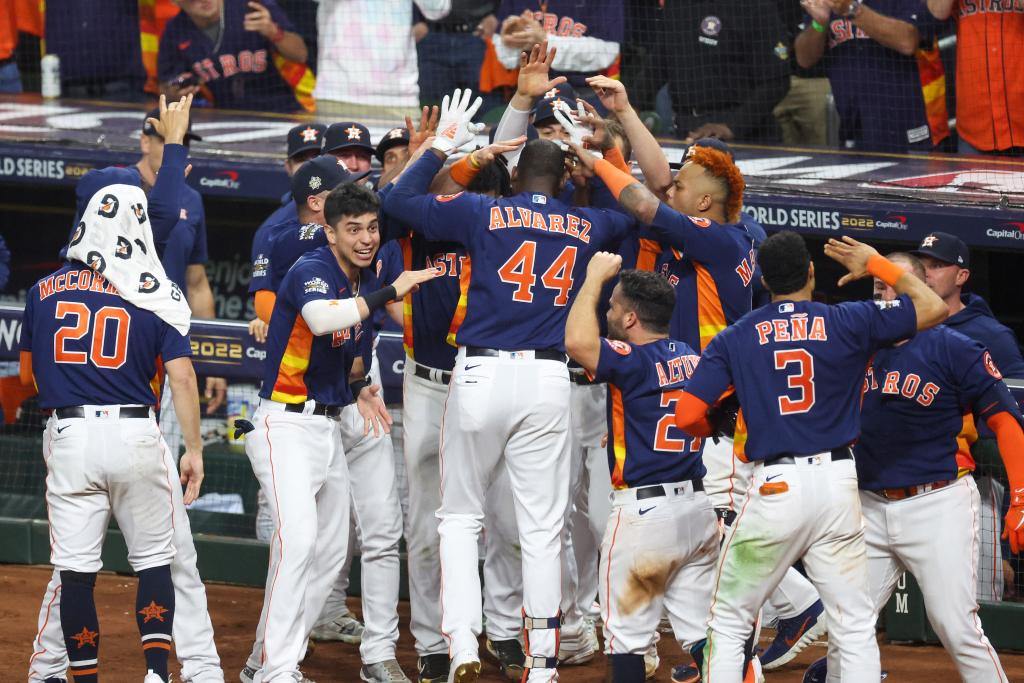 HOUSTON – The anticipation started in the sixth inning and built with each of the nine outs remaining.

It was only a matter of time Saturday: these Astros were going to win the World Series.

Minute Maid Park became the scene of an orange alert with the Astros’ 4-1 victory over the Phillies in Game 6 of the World Series. The Astros celebrated a second world championship in six seasons, leaving the Phillies to contemplate an unexpected run (at least by fans) through the postseason that ended two victories short of the ultimate prize.

The World Series title was Dusty Baker’s first throughout his celebrated managerial career, removing the 73-year-old from the list of best managers/head coaches to have never won a title.

With a sellout crowd of 42,958 chanting “We want Houston” at various points – a shot at Yankees fans who had chanted the same before the ALCS – the Astros closed the series with a third straight victory.

In the end, the Astros’ pitching was too much for the Phillies, who were held to three runs over the final three games after erupting for five homers in Game 3.

This one tilted in the Astros’ direction in the sixth on Yordan Alvarez’s monstrous three-run homer that gave the Astros a 3-1 lead. Phillies manager Rob Thomson had removed Zack Wheeler and summoned left-hander Jose Alvarado to face Alvarez, who crushed a 99-mph fastball over the center-field fence.

The rally started with Martin Maldonado drilled by a pitch before Jeremy Pena delivered a single with one out. Alvarez, who blasted 37 homers in the regular season, hadn’t left the yard in the postseason until his bomb against Alvarado.

Alex Bregman followed with a walk and reached second on a wild pitch before Christian Vazquez’s RBI single extended the Astros’ lead to 4-1.

Wheeler lasted 5 1/3 innings and allowed two earned runs on three hits with one walk and one hit batsman. The right-hander was removed after 70 pitches.

Kyle Schwarber homered leading off the sixth to break the scoreless deadlock. The blast was Schwarber’s sixth this postseason, tying him for the Phillies’ lead with Bryce Harper. Framber Valdez left a 2-2 fastball over the plate that Schwarber crushed into the right-field seats.

Valdez was removed after the sixth inning with the Astros ahead 2-1. The left-hander, in a second dominant start in this series, allowed only two hits and struck out nine with two walks.

Wheeler, pitching on six days’ rest, saw the return of his velocity – it had dipped in his last start – and rolled through the early innings.

In his Game 2 start, Wheeler scuffled through five innings in which he allowed five runs, four of which were earned. It led to Thomson giving Wheeler the extra rest, surmising the right-hander was feeling the effects of building up too quickly in September after the forearm inflammation that forced him to the injured list subsided.

The Phillies had their best early shot against Valdez in the second inning when Alec Bohm singled and Matt Vierling drew a two-out walk. But Valdez retired Edmundo Sosa to escape. Vierling and Sosa were in the starting lineup over Brandon Marsh and Byson Stott to get additional right-handed bats in the lineup against Valdez.