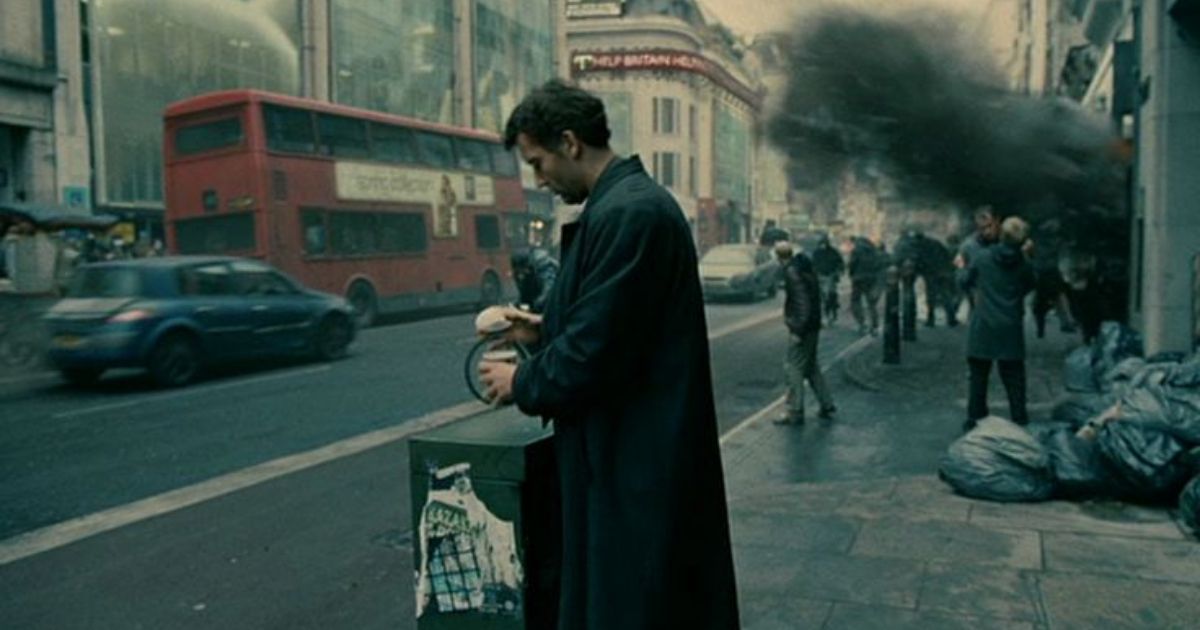 The idea of the apocalypse has always fascinated humanity, testified to by the fact that religions incorporate it into their eschatologies and artists utilize it as a literary device. It only makes sense that the most sensorially stimulating artistic medium, cinema, would embrace the genre as a way to reflect contemporary fears and concerns, dating back to 1916’s aptly titled The End of the World (which itself illuminated worries over the then-recent Halley’s Comet). With global pandemics and the cataclysmic effects of climate change upsetting our daily lives, the end of the world is on our collective minds more than ever, so it only makes sense to catalog the best apocalyptic films.

A brief definition of terms may be important here, considering the broad array of ways the human race has died out on the silver screen. Zombie cinema has become so culturally prevalent (and relevant) that it should rightfully comprise its own ranking; likewise, many great films feature world-threatening catastrophes but might not be considered specifically apocalyptic. Ultimately, cinematic apocalypses are most powerful when they can master a certain tone and create an emotional impact. These films effectuate a convincing sense of dread and hopelessness at the prospect of our demise, leaving us truly shaken and disturbed, yet also somehow grateful to be back in this bright, odd world in which we’re all still alive with possibilities, at least for the time.

Here are the best of those films, ranked.

This Is the End allows audiences to enter into the ever-escalating and ridiculous antics of fictionalized versions of familiar actors during a party on the eve of an unexpected religious apocalypse. This is an ideal example of what is often termed ‘hangout’ movies, where the narrative is less important than the time spent with interesting characters. While the apocalypse outside the doors of James Franco’s mansion may be terrifying, the reactions of the debauched celebrities turn it into a frivolously fun party.

Directed by Superbad‘s Evan Goldberg and Seth Rogen, This is the End brought together an incredible cast of modern comedy actors, including Jonah Hill, Danny McBride, Paul Rudd, Michael Cera, Craig Robinson, and Channing Tatum. According to Rogen, about 50% of the film was adlibbed.

Political satire at its best, Adam McKay’s apocalyptic comedy Don’t Look Up centers on an astronomy student and her professor (played by Jennifer Lawrence and Leonardo DiCaprio) trying to warn the president (Meryl Streep), media, and the public about a world-destroying comet. Astronomers can’t get anyone to take them seriously – and it is both funny and painful to watch.

McKay told Gold Derby that the idea of Don’t Look Up sprang from his conversation with the film’s co-writer David Sirota, saying, “We were commiserating about the lack of coverage of the climate crisis and he said, ‘Oh yeah, it’s like an asteroid is going to hit earth and no one cares,’ and I was like, ‘That’s it!'”

Based on Cormac McCarthy’s notoriously bleak novel, John Hillcoat’s The Road is equally uncompromising and relentless in its monochromatic vision of wasted earth and the father and son attempting to navigate it. There is something inherently noble about Viggo Mortensen’s character as he braves the end of days, and the emotional resonance of his paternal bond stays with the audience long after the apocalypse. Mortensen decided to take on the role of “The Man” instead of taking a planned break from acting, and after the strenuous regime he put his body through for this film, would take a two-year acting hiatus.

There is a long tradition within horror cinema wherein humanity itself becomes more villainous and threatening than any perceived monster. It Comes at Night, the masterfully directed sophomore feature from indie director Trey Edward Shults and starring Joel Edgerton, earns its place in this lineage. This film is a small, claustrophobic, and intense study of ordinary humans in extraordinary situations. It Comes at Night is considered both a critical and financial success, as it turned it’s meager budget of between two and four million dollars into more than $20 million at the box office.

On November 20th, 1983, 100 million Americans tuned in to ABC to watch Nicholas Meyer’s television film The Day After. With over 60% of the viewing audience, the film traumatized a whole generation of people terrified of mutually assured destruction during the Cold War, and for good reason. This film remains the most-watched TV movie in film history. With its realistic presentation of what a nuclear holocaust would actually look like, the film remains a disturbing rallying cry for disarmament to this day. The effect this film had on its viewers was so powerful, that ABC had to set up a 1-800 hotlines to calm people down after its initial release.

John Krasinski had made a career out of dead-panning to the camera in The Office and creating independent films like The Hollars, so he surprised everyone when he broke box-office records with this small gem. Filmed with his wife for a budget of $17 million, (compared to the $200 million budgets of other apocalyptic flicks like 2012), A Quiet Place differentiates itself by viewing the end of the world through the lens of parenthood, using a creative gimmick and sound design which went on to launch A Quiet Place franchise. Aside from the film being Oscar-nominated for Best Sound Editing, it has won 9 prestigious film awards, including American Flim Institute, Saturn, and Critic’s Choice awards.

Perhaps only Terry Gilliam could have remade the iconic French short film La Jetee and made something even better: 12 Monkeys. Between the manic overdrive of Brad Pitt (who garnered the first and only Oscar nomination he would receive for more than 13 years) and Bruce Willis, the kaleidoscopic cinematography, and the carnivalesque score, Gilliam’s vision is an iconoclastic and effusively exciting way to watch the world end. The film also spawned a SYFY original TV series that spanned for four seasons.

The most harrowing anti-nuclear film to come out in response to the Cuban Missile Crisis, Fail Safe still retains its implacable tension sixty years after its release. Sydney Lumet utilizes exaggerated close-ups in high-contrast black-and-white which, along with the complete lack of score (though Hal Schaefer wrote one that was never used), ratchets the nerves all the way to its disastrous conclusion. The film was released the same year as Dr. Strangelove or: How I Learned to Stop Worrying and Love the Bomb by Columbia Pictures, and director Stanley Kubrick insisted his film be released first, which cut down on the viewership of this one.

In the breathtaking drama Melancholia, the Danish filmmaker Lars von Trier offers his version of the end of the world. With Kirsten Dunst in the lead role, the movie focuses on a young woman who experiences depression that overshadows her lavish wedding party just as a mysterious planet called Melancholia is about to collide with Earth. Von Trier’s inspiration for Melancholia came from his own experience of depression, which can often feel like a personal apocalypse.

Something justifiably missing in most great apocalyptic films is a sense of hope, which makes sense considering the drab subject matter. For most of its running time, Alfonso Cuarón’s Children of Men does not seem like a beacon of hope, what with its ashen grays and dirty browns, its hopeless and cynical protagonist, and the depiction of repeated hardships in cinematically masterful fashion. Yet, in the end, this bloody struggle is for something beautiful – life, hope, and a different tomorrow.

Where this film tells a story about all women becoming infertile, in the original novel written by P.D. James, the apocalypse was brought on by all men not being able to produce sperm. Although Children of Men was nominated for three Oscars, including Best Writing, Best Cinematography, and Best Film Editing, the film was seen as a financial failure, only bringing back $70 million of its $76 million-dollar budget.

An animated children’s film may be a strange choice for great apocalyptic fiction, but Andrew Stanton’s WALL-E is a strange film. While Pixar has never been hesitant to portray tragedy and despair (the beginning of Up, the end of Toy Story 3), they have never gone as far as they do here – greedy corporations and complacent morons have turned the earth into a gargantuan garbage dump haunted by robots who sadly seem more human than anyone else in the film. This film tied Beauty and the Beast to become the only animated film to be nominated for six Academy Awards. WALL-E was seen as an analogy for social criticism for the way we treat our planet.

Often called an apocalyptic filmmaker, the Soviet master Andrei Tarkovsky created his poetic parable about human beings hurtling toward catastrophe. It is The Sacrifice, his final film, which follows the intellectual Alexander (played by Erland Josephson, a frequent collaborator of director Ingmar Bergman) who attempts to deal with God in order to stop a nuclear apocalypse. Alexander promises that if God saves the world, he will destroy everything he loves. The allegory of Christian self-sacrifice, Tarkovsky’s film is a beautiful quest into the heart of apocalypse.

It’s astonishing that George Miller, at 70-years old and three decades after the last Mad Max film, had this in him – a massive, critically adored action spectacle which garnered ten Academy Award nominations and was named the greatest film of the century in a poll of critics and audiences by Empire magazine. This is not hyperbole; with its detailed world-building, feminist allegories, incredibly impressive set pieces, committed performances, and brilliant effects, Fury Road is both the masterpiece and master of all apocalypse films.