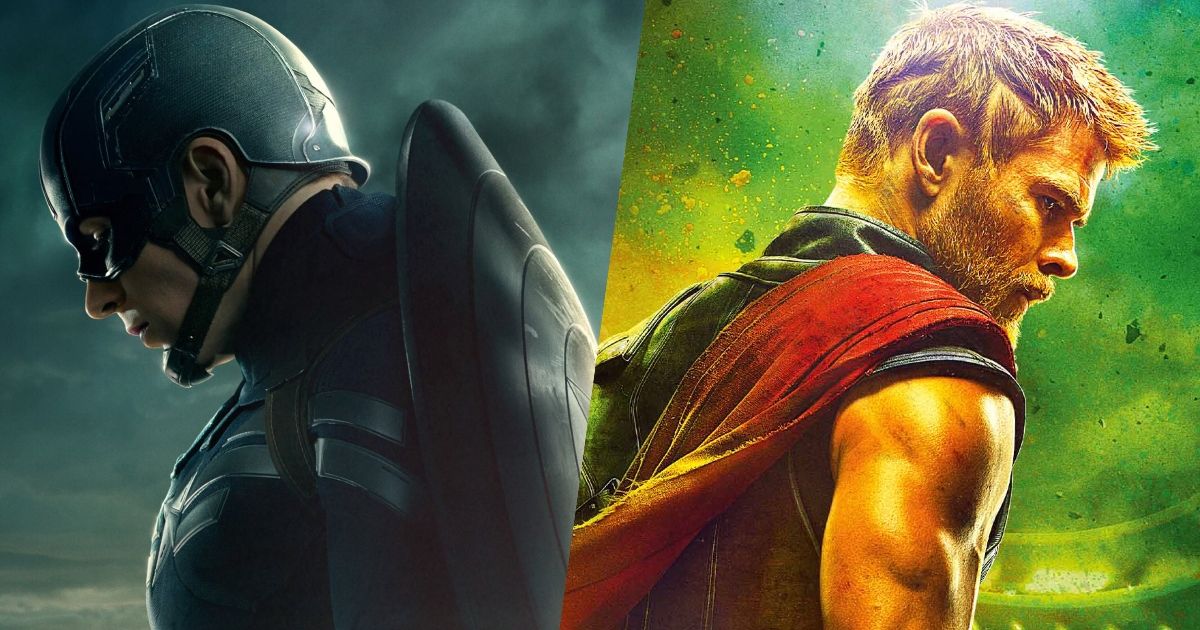 The Marvel Cinematic Universe has been around for almost 15 years, beginning with Jon Favreau’s Iron Man, which changed the game for comic book superhero films. The massive cinematic landscape of the MCU includes many different franchises, some with multiple sequels. Some sequels, in fact, have been better regarded than others, with some surpassing the franchise’s original film in terms of quality, story, and execution. Here is our ranking for the nine best MCU sequels.

Coming in at number nine is the sequel to the film that started it all. Iron Man 2, while not quite living up to its predecessor, still delivers fans an enjoyable story with an interesting arc for Tony Stark as he struggles with the government trying to take his tech. Tony is also dealing with the side effects of the arc reactor in his chest, which is slowly killing him.

Iron Man 2 significantly introduces two key characters that play pivotal roles in the rest of The Infinity Saga: Natasha Romanoff, aka Black Widow, and Nick Fury. The villain of this film is the somewhat forgettable Ivan Vanko, who wants to destroy Tony Stark’s legacy. Iron Man 2 has no shortage of action, and we also get introduced to War Machine, formerly played by Terrence Howard, whom Don Cheadle replaced. The success of this film, building upon its predecessor and leading into an ensemble film that changed the direction of superhero films forever, cannot be overstated.

8/9 Doctor Strange in the Multiverse of Madness

2022’s Doctor Strange in the Multiverse of Madness is the sequel to the wildly popular 2016 Doctor Strange solo film. The film boldly presents The Scarlet Witch as the main antagonist. Having been corrupted by the Darkhold in an unyielding quest to find her children, Wanda goes full villain in this film. She massacres Kamar Taj. She keeps Wong as a prisoner. Her goal is to kidnap a young girl so that she can take her ability to travel the Multiverse (knowing that the girl will die in the process). Some say that the MCU went a bit overboard with Wanda’s 180-degree turn from tragic hero to unredeemable villain. Some fans argue that this was more a film about the Scarlet Witch than Doctor Strange. That being said, Strange gets some much-needed character growth by the film’s end.

This was the MCU’s first horror movie attempt, and they picked the right director in Sam Raimi, who has experience directing both horror and superhero films. Multiverse of Madness gives MCU fans their first look at different universes, currently standing as one of the first pieces of MCU content that could be integral in the lead-up to the multiversal war we suspect is coming in Avengers: Secret Wars.

Thor: Ragnarok was a game-changing sequel for the Thor franchise. Director Taika Watiti brought a level of humor that transformed Thor’s character. As outlined by Screen Rant, Ragnarok casts off the stigma that Thor is “too serious all the time,” and the results speak for themselves. Ragnarok performed incredibly well at the box office and with critics. We see the transformation — and no, not just the haircut — of Thor realizing his hammer was never the source of his strength, it was merely a tool to focus his power. Thor realizes where his true strength lies and understands that Asgard is lost. In an attempt to ensure the survival of the Asgardian race, Thor sacrifices the beautiful golden city in order to rid the universe of his sister Hela, played magnificently by Cate Blanchett. As Thor is reminded throughout the film, Asgard is not a place. It’s a people.

James Gunn was the first MCU director to introduce real comedy into the mix with Guardians of the Galaxy and the sequel Guardians of the Galaxy Vol. 2. But it’s not all comedy: Gunn delivers a powerful sequel filled with, yes, laughter, but a lot of heart, some very tender moments, and some fantastic action sequences. Kurt Russell plays the Villain/Planet/Celestial Ego, who also happens to be Peter Quill’s father. Quill finally has the dad he always wanted, and his relationship with Gamora is flourishing. What could go wrong?

Captain America: The Winter Soldier is one of the best MCU films to date, having withstood the test of time and falling just behind its sequel on our list. The Winter Soldier introduces a brainwashed Bucky Barnes as the titular villain. Having been injected with Super Soldier Serum, when he was captured by Hydra in The First Avenger, Bucky is now a match for Steve in combat, even having somewhat of an advantage given that one of his arms is metal. He is also a brilliant military strategist, repeatedly proving that he is on Cap’s level in virtually every way.

Robert Redford stars as Alexander Pierce, Head of S.H.I.E.L.D., but secretly Hydra, as this sequel sees S.H.I.E.L.D. fall, having been controlled from the shadows by Hydra all along. Nick Fury and Black Widow also star in this action-spy thriller that appeals to more than just MCU fans, as outlined by Pop Matters, with fewer superhero antics and more grounded, realistic action.

Coming in at number four, Captain America: Civil War introduces Spider-Man and the late Chadwick Boseman’s Black Panther to the MCU, adding to the fray and culminating in one of the best action sequences in MCU history: the airport fight. This film is high on our list for several reasons. As stated, it introduced two of the most famous characters from Marvel Comics to the silver screen. Baron Zemo is a fantastic villain, a standout when it comes to MCU villains. Many have been one-dimensional or lacking any genuine motive other than wanting to be evil for the sake of being evil. Zemo’s motivations are more complex.

The film has the emotional weight to truly live up to its name, as the Avengers are left fractured by the film’s end, which leaves them separated and unprepared when Thanos inevitably comes knocking in Infinity War. What’s most impressive about this sequel is the relatability and empathy you feel for Tony, Cap, and Bucky in the film’s final fight. Everyone’s motives make sense: Stark wants revenge for his dead mother; Cap wants Tony to understand that it wasn’t Bucky’s fault; and Bucky is simply trying to survive, and he clearly feels tremendous guilt for the sins he committed as The Winter Soldier. We, as an audience, can understand each person’s motivation to continue fighting, and the emotional weight is genuine.

Related: MCU: Longest Movies in the Franchise, Ranked by Runtime

The third installment in the Avengers franchise, finally giving us Thanos as the big bad of the Infinity Saga, is coming in at number three on our list of the best MCU sequels. Infinity War was more Thanos’ film than it was the Avengers’. And at the end of the film, Thanos wins. Our heroes, because of the events of Civil War, are scattered, leaving the Infinity Stones vulnerable. Thanos collects all six Stones and wipes out half of all life in the universe. This film is gripping, roughly two and a half hours, but it flies by, with every scene crafted beautifully from both a writing and visual perspective. The Russo Brothers created a cinematic masterpiece. Even for the ever-flourishing MCU, it raised the bar regarding cinematic excellence.

The final installment in Jon Watt’s Homecoming Trilogy comes in at number two. Spider-Man: No Way Home brought back iconic villains from the Raimi trilogy and the Marc Webb films. And the big reveal was that Tobey Maguire and Andrew Garfield were returning as their iterations of the Web-Slinger.

No Way Home is the best installment of the MCU’s Phase Four, which we now know is the first phase of The Multiverse Saga. This film gives fans our first look at the Multiverse and shows us that anything is possible in a multiversal cinematic universe. The film includes Doctor Strange, who attempts to help Peter with a spell that goes very wrong, causing villains from other universes to bleed into the mainline MCU. No Way Home blew away both critics and audiences, making loads of money at the box office and providing perhaps the best bit of fan service the MCU has ever given.

The fourth installment in the Avengers franchise puts a fitting bow on the incredible story spanning 11 years and 22 films. Earning the number one spot on our list of MCU sequels is the film that bookended the Infinity Saga — Avengers: Endgame. Endgame picks up where Infinity War left off, and the film involves some time-travel shenanigans. Time travel is often a problematic tool to use effectively in a story — the rules have to make sense — but Endgame simplifies the time travel enough for the layman to understand without too many complications.

Avengers: Endgame revisits past MCU events giving fans a terrific dose of nostalgia. The film harkens back to previous MCU films,giving fans new perspectives on these beloved past MCU milestones. Ultimately, Thanos (returning as the big bad) uses time travel to go forward in time and attempt to stop the Avengers and destroy their universe. This culminates in the biggest battle in MCU history as nearly every Avenger, from Howard the Duck to the dusted Doctor Strange and Black Panther, return just in time for Cap to say the famous line teased in Age of Ultron, “Avengers, Assemble!” The good guys win the day, not without sacrifice, as Tony Stark makes the sacrifice play to snap away Thanos and his army for good.