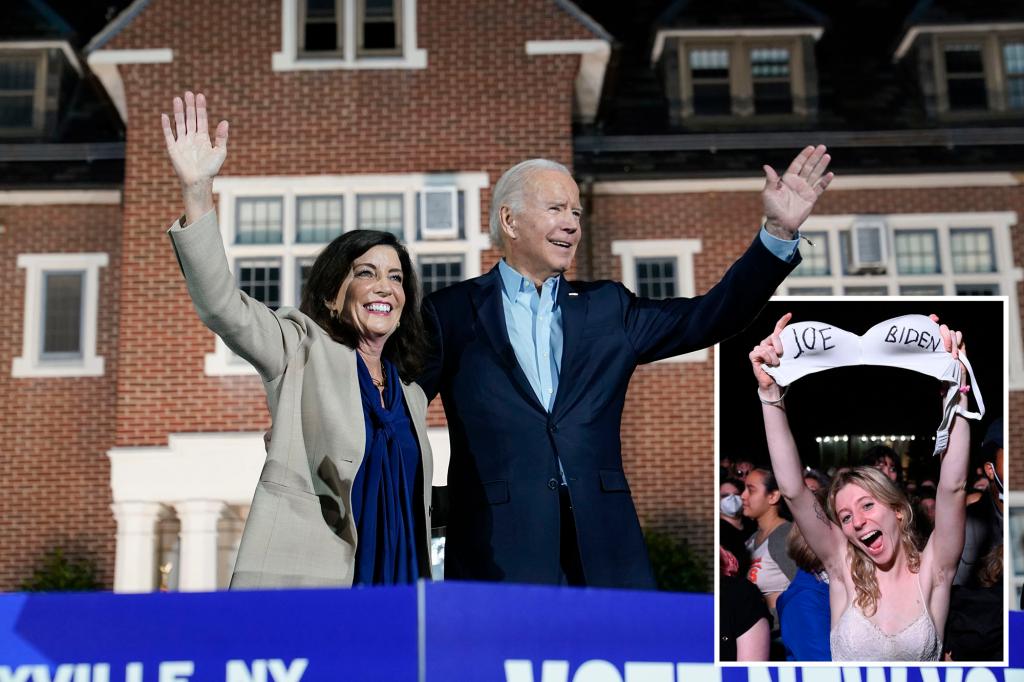 President Biden joined Gov. Kathy Hochul in Yonkers on Sunday in a last-ditch effort to help her try to stave off GOP challenger Lee Zeldin.

Biden, who hasn’t been doing much midterm campaigning, was among other Democratic heavyweights who have tried to come to Hochul’s rescue in the past week as Zeldin catches up to her in polls.

“New York, you got two days, two days to make sure the rest of your state knows the good that they’ve got in Kathy Hochul,” Biden said.

The president brought up Zeldin’s tenure as a congressman in his speech, slamming him for voting against the Democratic agenda, including Biden’s Inflation Reduction Act.

Biden and Hochul appeared at Sarah Lawrence College in a rally attended by hundreds, where Biden at one point stumbled on the stage and appeared to lose his footing.

“Whoops,” he said as he recovered his stance.

Democratic Senate Majority Leader Chuck Schumer, who is also up for re-election, told the rally’s attendees before the president went on that Gov. Hochul “worries about results, not the headlines.

“If Democrats turn out in record numbers, she will win. But we can’t be complacent. We can’t take it for granted. We can’t say, ‘Oh, New York is a Democratic state, I don’t have to vote,’ ” Schumer told the crowd, adding they need to fight against “the MAGA Republican war on women and their radical anti-choice agenda.”

Schumer took some shots at Zeldin as well.

“Lee Zeldin, as you know, recently you’ve seen him on TV only starting to ride the subway. But guess who voted against the $15 billion to keep our subways and mass transit and commuter rails going? Lee Zeldin voted no,” Schumer said.

Schumer rallied for Hochul earlier this week in Brooklyn along with former President Clinton as part of the governor’s frenzied effort to win ahead of Tuesday’s midterm elections. She was also joined at one event by Vice President Kamala Harris and former Secretary of State Hillary Clinton.

One of the governor’s campaign events this week was marred by violence when a female pro-Zeldin protester was choked by a man during a skirmish at the Manhattan rally.

The melee happened near the landmark Stonewall Inn, where Hochul was appearing with Bravo host Andy Cohen.

Hochul has a 7.4-point advantage in the race, according to poll aggregator FiveThirtyEight.