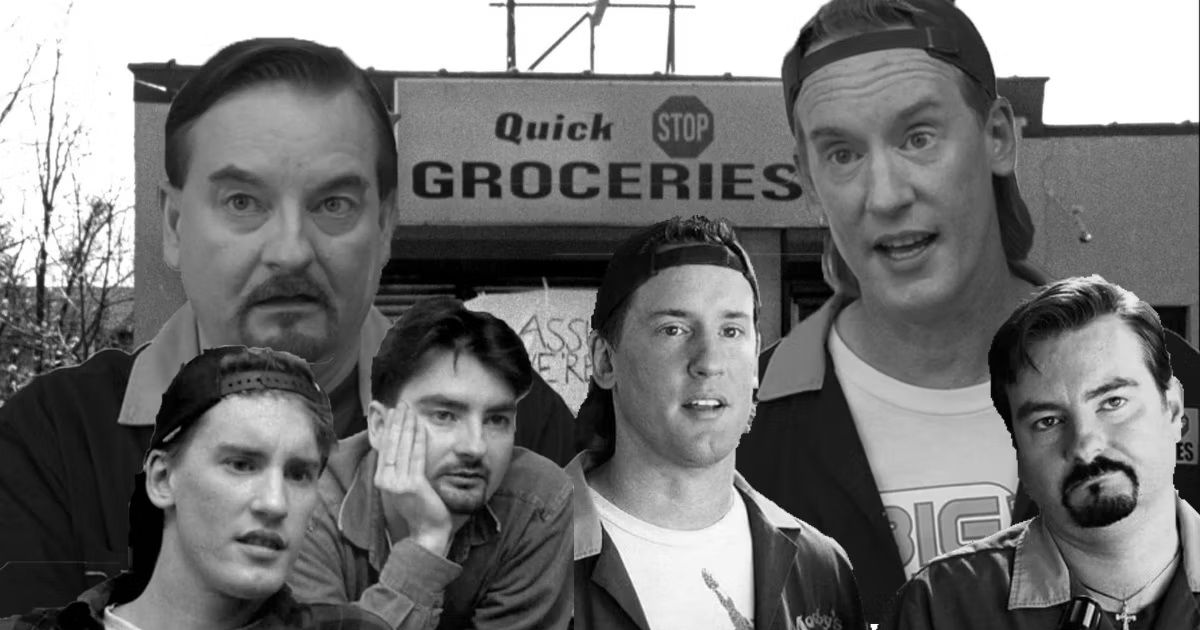 Clerks 3 and a Retrospective of the Kevin Smith Trilogy

This article contains spoilers for Clerks III.Clerks III does what so few comedy films have done — completed the elusive comedy trilogy. Except for Naked Gun, Austin Powers, and (shudder) The Hangover, the Clerks series is smutty auteur Kevin Smith’s jewel in a papier-mâché crown, and the one item in his filmography that he will forever be associated to.

Clerks III is pretty darn good. As a film on its own, it sees out a lifespan of work from a writer who was once dubbed the next Scorsese for the original chapter, and outside this, part three works as an example of just how much Smith has matured as a filmmaker. Cloying and regularly saccharine, Clerks III is sort of allowed to be at this point. For a film that relies on the inciting incident of Randal (Jeff Anderson) having a heart attack — and then hysterically copy and pasting the same ploy for friend Dante (Brian O’Halloran) later in the film — it’s a marker that, following Kevin’s own heart trauma, these characters are extensions of Smith and they him. Clerks III exists because of Kevin Smith, and “Kevin Smith” exists because of Clerks.

I Assure You, We’re Open

Everyone knows the background story of Clerks by now. Kevin Smith, a plucky store clerk from Jersey, would max out multiple credit cards to raise the funds needed to make his cinematic vision of a no-hoper convenience store. Shot with his friends in the very shop that he worked in at the time, Clerks was a snapshot of dead end jobs: co-workers talking about pop culture as second nature, girls, and how they were going nowhere in their lives.

Clerks was purchased by the conveyer belt of 90s independent cinema hits, Miramax, and became one of the quintessential movies of the decade for its sheer dogged existence and biting no-sh*ts-given script. Clerks was an indie darling at Cannes on the year of its release, and Smith was the new kid on the block. Fast-forward to 2011 and Empire Magazine listed the film 19th in its list of The 50 Greatest American Independent Movies.

While Clerks has so many copycats by now (some of which Smith himself is responsible for), its sharp script and DIY ethos, grainy black and white visuals, and punk rock energy hasn’t been watered down whatsoever. It is a classic, and redefined American cinema. The film’s legacy and how it came to be is a success story in every single aspect.

For all of his characters’ musings on the death of innocents in the ongoing conflict of Star Wars, through can-do gumption and hard work the man behind the camera of Clerks had become his own working class version of George Lucas.

Kevin Smith as writer and director could springboard himself into a career from Clerks‘ success, and Clerks III (a whole 28 years later) doesn’t phone it in either. Coyly critiquing reboots in the current market, Clerks III comes full circle as these two cashier losers who have done very little with their lives decide to make a movie about that exact lifestyle — just like Smith did back in the day when he made the first film.

The movie is self-referential to no end as an aged cast shoot actual scenes from the first film, but its script is respectful of lives lived, and lost, and doesn’t skimp on the impact that Smith feels this ending (and it very much may be the last we will see of these characters) deserves to have.

2006s Clerks II is a movie that justifies its own existence. The original Clerks really didn’t require a follow-up (especially when you consider that the characters’ lives are written to never achieve or make an impact), but there is a budget behind its sequel that helps realize a vision and brings a layer of technical quality along with it.

Fan favorite characters like Elias are added, and the only ‘proper’ actor in the whole series, Rosario Dawson, obviously shines. Setting its story in the oh-so-slight upgrade of a fast food joint over a convenience store/video rental store is a nice touch, even just down to the garish yellow and purple color palette that the sequel opts for now that it has evolved beyond black and white.

It was more of the same, but not unwelcome when there was so much confidence flowing through its supercharged crassness. Clerks II was an expansion on its characters, if not much of an elaboration.

Smith made increasingly poorly reviewed films over time and his star waned, as the filmmaker became a very large butt of the joke. Like-minded pop-culture bin Family Guy could throw lowest-common-denominator darts at Smith’s XXX-L frame when he was being dejected from flights for being too fat. All the while the former ‘new voice of American cinema’ was becoming wildly outspoken about anything and everything online via his podcast and large internet following. Couple that with creating only the occasional gem, and said voice was becoming irritating white noise.

With diminishing returns on screen and his Jay & Silent Bob characters being shoehorned into every other film that didn’t require them, the director, writer and actor felt like he was repeatedly recycling himself. With so much effort spent trying to rekindle greatness, Smith hit a further hurdle in the late 2010s when Miramax, co-created by Harvey Weinstein, folded and Weinstein was incarcerated. Miramax had been a constant from the start of Smith’s career (from 1994 to 2008, Smith made eight feature films, six of which were produced by Weinstein, with Dogma‘s rights currently owned by Weinstein as well), and when they fell apart, the filmmaker lost a major financial backer.

With Weinstein’s arrest, any success Smith had previously earned suddenly felt like it had been originally (although unwittingly) championed by that of a film-mogul rapist and seedy Hollywood user. Smith and his fans alike would come away feeling somehow guilty in previously supporting something that had now felt so tainted. Smith himself has been more than vocal about his unease in the process, and has since followed through with donating $2,000 a month to Women In Film for the rest of his life.

So many years on, returning to the world of Clerks for this third and possibly final outing should act as a roadmap for any up-and-coming filmmaker (American-born, or otherwise), because from nothing, a bearded Kevin Smith could helm his own movie and earn an entire career from it (and all of which based on zero initial experience to boot).

Since Clerks, Smith has worked across multiple genres and with some of the biggest stars in the game (Ben Affleck makes an obligatory cameo in Clerks III, John Goodman features in his excellent Red State, Johnny Depp in Tusk…), and has been more than repeatedly open about his own failures like the Bruce Willis-starring Cop Out.

Clerks III, however, acts as a sentimental bookend for this particular segment of his career. Through growth and an actual body of work outside of Clerks (despite how many Jay & Silent Bob movies are forced on us), Smith has shown that he can craft a closer and ultimately intimate story with his third part, and also end the trilogy well.

As Rosario Dawson returns (albeit briefly, but as an actress more popular than ever) for this latest outing, it shows that even a certified movie star like her respects the process and the film series’ legacy. There’s also a bravery in killing her character off-screen from the start, and provides an emotional edge that the series (or its actors) haven’t been gifted until now. Both Brian O’Halloran and Jeff Anderson show that they can perform the meatier parts of near death and everything that follows, and by letting his Dante die at the end, Smith is essentially letting the chapter that is the Clerks segment of his life pass on as well.

With Clerks III Smith has nailed the landing and has finished his flagship series with a surprising amount of grace and tact. Is the film perfect? Of course not. But even the sloppier elements (a pivotal scene of Randal in the hospital near the start cuts from multiple angles, distractingly so when a single shot was obviously the right choice) highlight Kevin Smith’s own amateur roots.

By the end of Clerks III‘s credits and after two heart attacks, obligatory pop culture references, and some pot shots at his peers, Smith himself speaks in voiceover about Clerks‘ legacy and what it has meant to him to be able to return to it, and it shows how the same fundamentals of what he originally made have remained.

His greasy fingerprints are all over this picture from start to finish, and its earnestness — in both its candid and self-referential screenplay, the film inside a film, and Clerks III as a whole — is endearing. From its opening shot, the movie is still filmed in his hometown, with his friends atop a rooftop playing hockey; he just now has more friends (along with a daughter) he can ask to be a part of his vision. Smith should be extremely proud of what he’s achieved looking back, with Clerks and everything in-between. Maybe not Yoga Hosers, though.