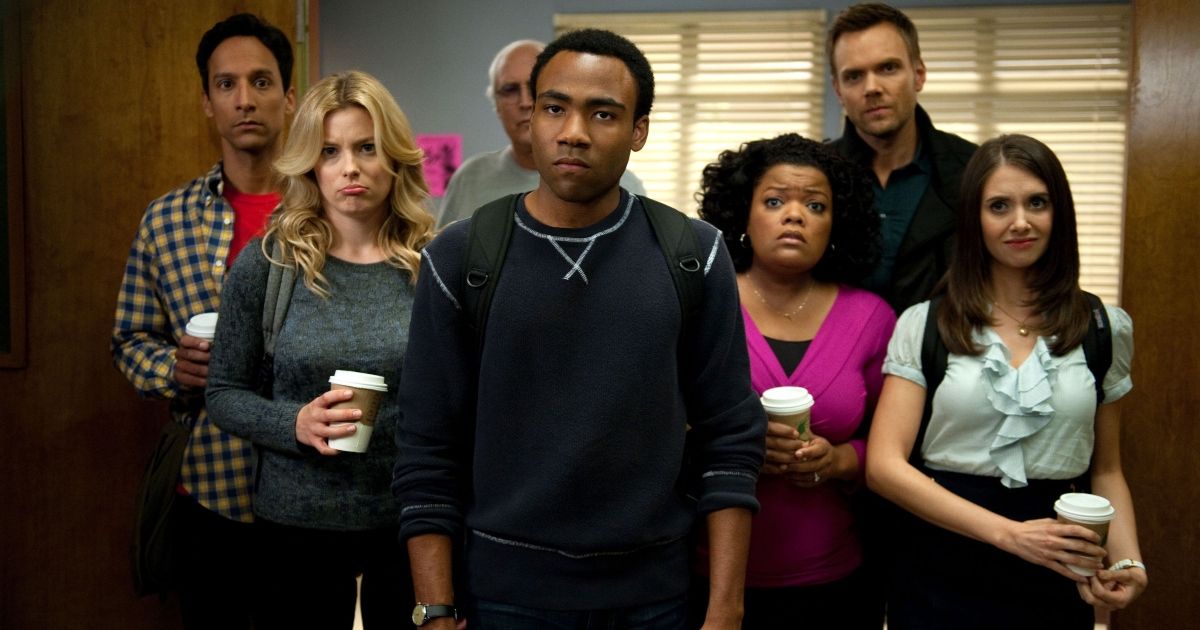 Nothing speaks to the chaos and core memories of college and adulthood quite like Community. A brilliantly written show that has managed to stay in the hearts of viewers for years, the story features a diverse set of characters with unique personalities that always makes the audience feel better about themselves. While they can be over the top, they are still relatable characters and incredibly human. The audience is able to see themselves in similar situations or remember times they’ve dealt with similar things– trying to help a depressed friend by playing their favorite game, trying to balance work and relationships, hating the glee club, and so on.

Community is filled with dynamic and realistic characters, all led by the main study group, who are perfectly and terribly flawed. Some of the main characters in the group are more likable than others, and almost everyone has a favorite. But all of them work well together to make the show as enjoyable and iconic as it is. So for those that know Community, here’s a ranking of the series’ notorious study group.

We all knew who was going to be at the bottom of this list. Pierce is probably the least likable character of the bunch, one that viewers love to hate, but that’s just who he is and what the character was meant to be. There are always people in school that we get along with and don’t always ask to give us some space, but we don’t always like them. Pierce’s brashness and insensitivity brings a balance to the group with his realism. He is unapologetically who he is and is a classic outdated old man. He gives his friends a “bad guy” to learn from, while occasionally showing that he isn’t really an awful person. He tries to bond with Jeff by inviting him to his barber shop; he brings in Sophie B. Hawkins for Britta, so she won’t feel like a screw-up; despite the fact he has a lot to learn when it comes to racism, sexism, and so on; he still shows goodness. Even though Pierce isn’t really likable, he’s a dynamic and well-written character.

While we all love an independent woman who doesn’t take any crap, Britta is… well, Britta. In the pilot episode she presents herself as a strong feminist who values honesty above all else, and even exposes Jeff for lying and creating the study group just to try and sleep with her. But after the first episode, she slowly loses her assertiveness and becomes just a ditzy blonde with feminist and proactive ideals she can never really fulfill. She becomes the butt of a lot of jokes within the show as well as a source of annoyance and problems. She’s competitive about the causes she defends and protests, an unreliable moocher that doesn’t pay anyone back, and she has a frustrating on-again-off-again relationship with Jeff that brings strife to their friend group. The decline of Britta’s character is more a fault of the writers, but even with these flaws, she’s still a genuine person that tries to be herself and do good things (like LeVar Burton said, she’s a good friend– just really stupid with her money).

Here’s a hot take: while Jeff is the keystone of the show and nothing would’ve happened without him, he’s not that great a character. And certainly not as likable as some of the others. Jeff is a classic f-boy stud– he’s attractive, and he knows it, and he uses it. He’s able and willing to manipulate people with his attractiveness and charm. That being said, he does have a decent amount of growth throughout the entirety of the show. He goes from just wanting to sleep with Britta, to looking after and protecting his group, to becoming a teacher at Greendale. There are ups and downs in between those moments, but that’s what makes him one of the more realistic characters. Even though he isn’t the greatest guy, he knows it. He admits to his selfishness and flaws on many occasions (though he praises himself on just as many). His character has complexity and development which makes him relatable and entertaining for audiences to watch, even if he isn’t really that likable or admirable of a character.

Then there’s Shirley. She is incredibly interesting and relatable to audiences as a mother figure in the series. She shows audiences the struggles of marriage, of being a single mom, of having a late start on your dreams but still going for it anyway. Shirley is written as a strong female character and exemplifies this; even though her character does have some of the stereotypes of a strong and angry black woman, she still has depth. The only unfortunate thing is that her character doesn’t have a ton of agency throughout the series. Her character, for the most part, is there to fill out the study group. While there are episodes where she mentions she feels left out or only half included in things the group does, it doesn’t really change much. Shirley is a fascinating and empowering character; she just lacks the presence she deserves on the show.

Sweet little Annie is one of the better characters not just because of peppiness and passion, but because she also has a great development and story arc during the series. She begins as a love-sick perfectionist trying to get back the years she lost to her adderall addiction. Throughout the show she struggles with her need for perfection and desire to win and learns to let loose a little, understanding that as long as she is working hard, that’s what matters. And while she deals with a lot of ups and downs when it comes to love– going after not only her high school crush Troy, but also Jeff and Vaughn with the small nipples– but she also learns a lot about loving herself and her friends as well. Annie is able to grow into her girlishness without being insecure about it, and find purpose in her efforts for academic growth rather than just trying to be the best without a reason. By the end of the series she switches her studies from nursing to forensics and even lands a prestigious internship so she can work hard to make a difference. As Annie grows throughout the show, she becomes more likable and admirable to audience members.

Of course, we reach one of the most loved characters in the series– Abed. Abed is an extremely interesting and charming character, and most fans of the show fell in love with him within the first couple of episodes. He’s an adorable and awkward character with a passion for film and storytelling. His character deals with a lot of issues regarding his social skills (though characters acknowledge some of this is due to him being on the spectrum) and how he expresses himself in relationships. He tries to work on bonding with his study group; on interacting with mean girls and bully bikers; on rebuilding the relationship with his father who he felt blamed him for his mother leaving them. Abed goes through a lot of emotional and mental growth, as well as artistic growth. He goes from making vaguely prophetic films about his friends to going to film school in LA at the end of the show. Abed is a unique character with flaws that are understandable and relatable. He’s always a favorite in the hearts of viewers, and rightfully so.

Finally, at the top of the list we have Troy. Everyone’s beloved guy. Troy is arguably the funniest member of the study group and really holds everything together. He keeps things lively and entertaining for the audience, and his comedy complements all the other characters in the show beautifully. But while he’s definitely the comedic relief of the show, he does have some depth and character development. Troy is Abed’s best friend and shows a genuine love for him. He is a constant support for his friend and helps him when he needs it. He also works on discovering himself throughout the show, going from an arrogant jock to someone who enjoys tap-dancing. Eventually, Troy leaves the study group to sail the world, per Pierce’s final wishes, in order to explore the world and find something within himself. The show wasn’t quite the same without him. But Troy is a delightful and entertaining character that audience members always adore, easily making him one of the best characters in the show, both for his comedic charm as well as his kindness and growth.