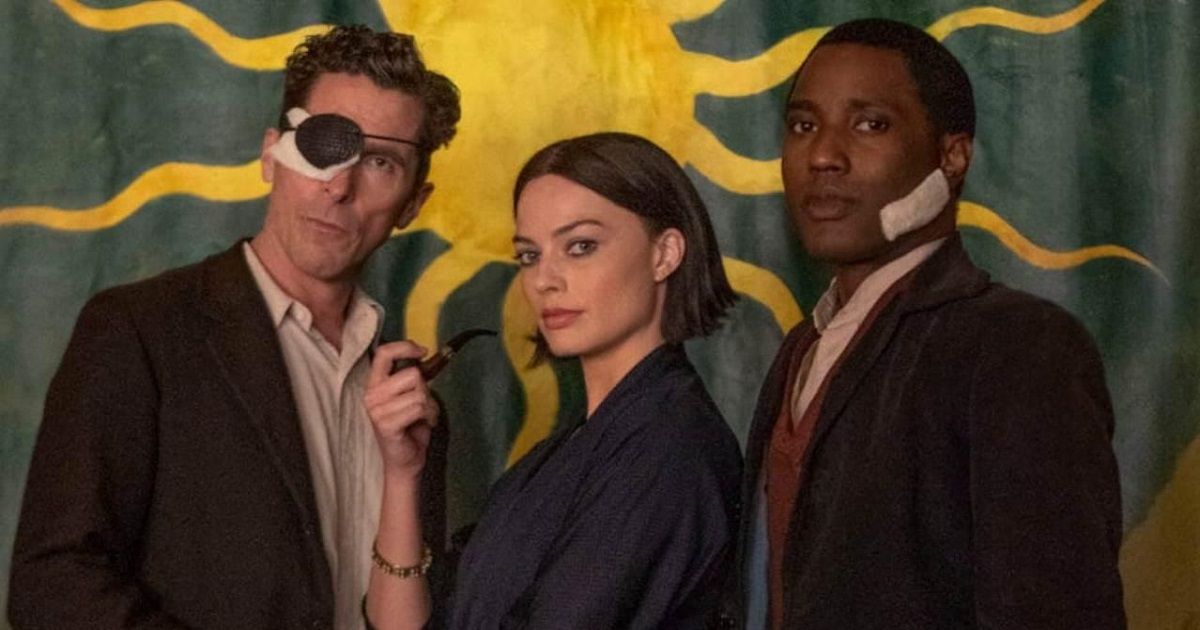 David O. Russell and Christian Bale are back in another period film with the requisite wacky characters. Amsterdam convolutes a murder mystery, forbidden love story, and fascist attempted coup in 1930s New York. The film crafts a fictional tale around an actual event, the Wall Street Putsch, that created a political firestorm. Russell depicts an America chafing from racial oppression and class divisions with an artistic touch. He gets humor and creativity points but fails dramatically at pacing. Amsterdam’s long runtime drips like molasses going backwards. Energetic high points are cratered by pointless scenes that could have easily been cut.

Bale stars as Burt Berendsen, a World War I veteran and doctor who treats his wounded comrades. Burt has a glass eye, wears a back brace, and covers his shrapnel scars with prosthetics. His uptown office helps the horrifically disfigured and suffering with pain alleviation. Burt tests all his new pills and concoctions on himself for safety.

John David Washington co-stars as Harold Woodsman, a lawyer, Burt’s best friend, and another injured veteran. A first act flashback reveals Burt taking over a company of black soldiers during the war. He enlisted to impress his wife, Beatrice Vandenheuvel (Andrea Riseborough), and her snobby Park Avenue parents. Burt and Harold were treated by an intriguing nurse in France. Valerie (Margot Robbie) kept the shrapnel and bullets from her patients’ bodies to make art. She and Harold fell madly in love. All three spent their initial post-war years partying in swinging Amsterdam.

A decade later in New York City, Burt and Harold are contacted by Elizabeth Meekins (Taylor Swift). The daughter of the recently deceased Bill Meekins (Ed Begley Jr.), their beloved general, thinks foul play was involved. Burt and Harold’s investigation soon has them linked to another murder. A clue leads to Valerie, who enigmatically dumped Harold in Amsterdam, and her wealthy relatives (Rami Malek, Anya Taylor-Joy). A sinister conspiracy brews with powerful insiders; who want the support of a revered war hero (Robert De Niro).

A Complex Plot With Many Moving Parts

There’s a lot going on here. Russell (Silver Linings Playbook, American Hustle) has a complex plot with many moving parts. He has an affinity for eccentric characters and gives them time to shine. Russell favors individual performances over his narrative. Burt, Harold, and Valerie are an odd, idiosyncratic bunch. Their peculiar mannerisms and behavior are explored to a fault. They garner laughs but suck the air out of the story.

Valerie’s artwork, though fascinating, also gobbles up an inordinate amount of time. Her paintings, photography, and shrapnel tea pots are a focus. Robbie takes the place of Jennifer Lawrence, Russell’s usual muse was pregnant while filming. The interracial romance between Harold and Valerie stands out. Washington and Robbie have great screen chemistry. It would have been nice to see them in quieter moments. They have an unspoken tenderness that’s drowned out by flare.

Amsterdam mirrors the current heated political discourse. The film shows how moneyed elites use subterfuge to pit the working class against each other. There’s little difference between races where poverty is concerned. Demagogues rise under false pretense. A great scene between black veterans and Brownshirts about true American patriotism speaks volumes today. Russell delivers meaning but throws too much paint on the wall. The final product is abstract and tiring. An older woman sitting in front of me snored through the entire second act.

Amsterdam is a production of Regency Enterprises, New Regency, DreamCrew, Keep Your Head, and Corazon Hayagriva. It will have a theatrical release on October 7th from 20th Century Studios.