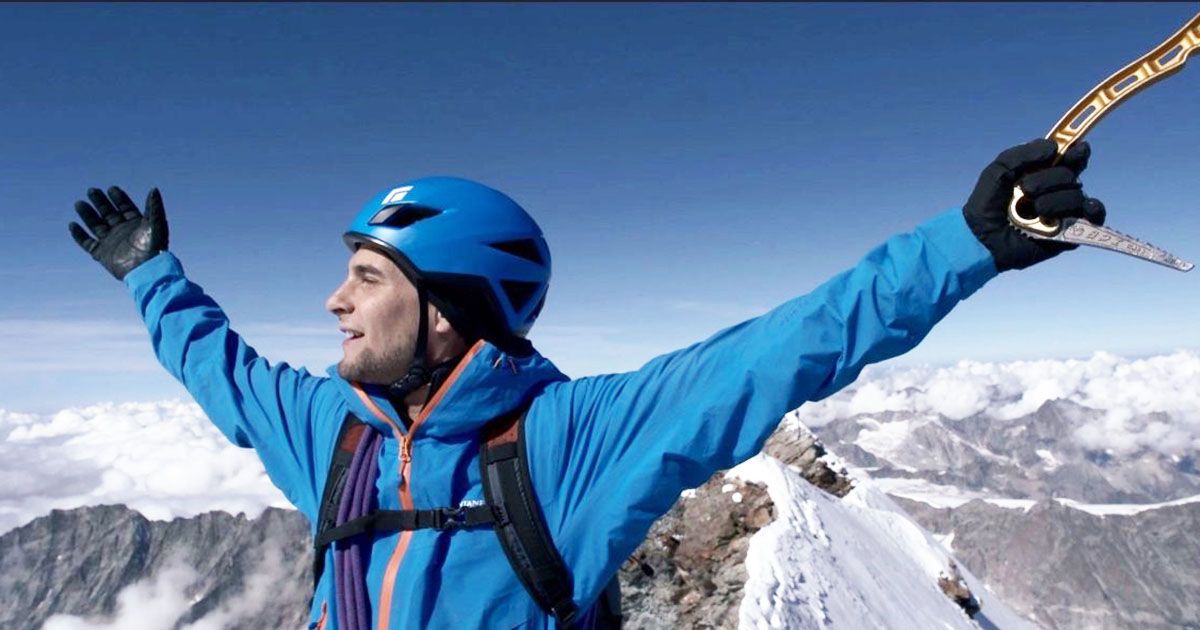 A bold undertaking to be sure, Gilbey wound up spending four years on the production, shooting extensively on the North Face of The Eiger and the notoriously dangerous Matterhorn. And, at times, at altitudes above 15,000 feet to boot.

“I wanted to give people a really good old-fashioned adventure,” Gilbey said. “We start with a couple of familiar storylines that, by the final third of the film, twists and rips up the rule sheet. I wanted to transport people to where I’m transported to, and to see and experience why people would climb to those heights.”

While the idea of appealing to today’s youth culture came to mind — countless films capture that, after all — Gilbey realized that his biggest star was nature itself. And that he should show her off.

“This could be a surfing movie or a sports movie,” he said. “And then I remember my brother saying to me that this wasn’t a film for young people, per se, it was a film for anybody who was ever young; anybody who ever had that invincible feeling in youth. In a way, the film is timeless.”

Summit Fever chronicles an ambitious mountain expedition that goes wrong. What begins as a daring dream to scale the world’s most challenging trio of mountains quickly swerves into a seemingly inescapable nightmare when a group of friends become trapped by a deadly storm on a summit. With no rescue in sight, the gang is forced to trust each other, saving themselves using any means necessary to survive.

The genesis of the film happened — of course — on top of a mountain. Gilbey had been a climber for many years.

“The first time I stood on top of The Eiger or The Matterhorn back in 2011, a silly little thought started niggling in my head. ‘You know,’ I thought, ‘there’s a story here.’ But the thing is, if you’ve been up to those vistas, it’s very difficult to fake it [filming]. You’ve seen a lot of films — and very big-budget films — that use a computer backdrop. There’s an inherent artificiality to a shot. There was only one film company that said, ‘Yeah, okay. We’ll take a risk on this,’” he said.

Gilbey ventured forth, test shooting with high-end cameras in the breathtakingly scenic Chamonix Valley in France. “There was no point climbing up high to put something on a super long zoom lens where it just blurs everything out,” he explained. Instead, he attempted to capture the stunning mountainscapes wide to prove his filmmaking skills.

He’d always climbed with a partner and did so in Chamonix as well for the pre-production shots. “I had a babysitter,” Gilbey said, chuckling. “Basically, when I was filming, climbing partners roped me in, keeping me safe, so they could dangle me off anything and everything.”

Casting an actor several years prior to filming became a priority because Gilbey had to get the actor on the north face of The Eiger.

“Those shots couldn’t be done in a scheduled shoot, you know, like, you and me having a dialogue scene in a bar somewhere. It really doesn’t matter what the weather is outside, what time of year it is, or anything like that,” he said. “But you have to be on The Eiger at certain times a year, and The Matterhorn, they don’t just open up just because a film crew says so.”

Helicopters were used extensively for the film, which gave Gilbey ample opportunity to capture stunning aerial shots. These weren’t just one-offs. Gilbey returned to some areas nearly 11 months later to film everything he needed.

Four years in the making, high above the clouds, the challenging shooting conditions paid off beyond anything VFX could have offered. “Nothing is as good as the real thing,” Gilbey said. “Nothing.”

Related: Exclusive: Filmmaker Alex Heller on The Year Between and Creating a Movie for Everybody

Shooting any movie is filled with challenges. A film where nature is the biggest star ups the ante. So, how did Gilbey et al. train the actors to get along with their “costar?”

“For all intents and purposes, out of all the actors, Freddie Thorp, who plays Michael, became a mountaineer during this shoot,” Gilbey said. “We trained him in Snowdonia National Park in North Wales. Although the terrain is lower, it has all sorts of brilliant rock climbing and very similar mountainous terrain to parts of the Alps.”

Gilbey said all the actors trained only with the best climbers. Ryan Philippe took rock and ice climbing in Italy.

“Ryan was really keen to do it,” Gilbey noted. “One of the reasons the climbing comes off very well in the film is because we had incredibly good climbers whom I used as technical advisors. But I’m a climber myself, so I don’t want to put a lot of nonsense in there. And nobody was pissed off they had to do it. The actors were 110 percent dedicated. They all became climbers.”

Gilbey also pointed out that shooting would have been challenging in any given year, but due to climate change — and, subsequently melting snow and falling rocks—extra precautions were taken to ensure everybody’s safety. Aside from a few scrapes and bruises — mostly his own — there were no injuries.

As for the ever-fascinating allure of mountain climbing, Gilbey is reflective.

“It’s very hard to put down in words,” he said. “It’s like this: You’re in the Highlands of Scotland, in the middle of February, and you are thousands of feet up a snowy ridge, with an orange sunrise coming up over a white landscape, and mountains as far as the eye can see on one side and the ocean on the other side. And there’s you, one other climber, and nobody else there. It’s a solitude you can’t get anywhere. It’s not even just the solitude, it’s truly being in nature. Unforgettable.”

Summit Fever, a Paramount release, is available in select theaters, on digital and on demand on October 14, 2022.