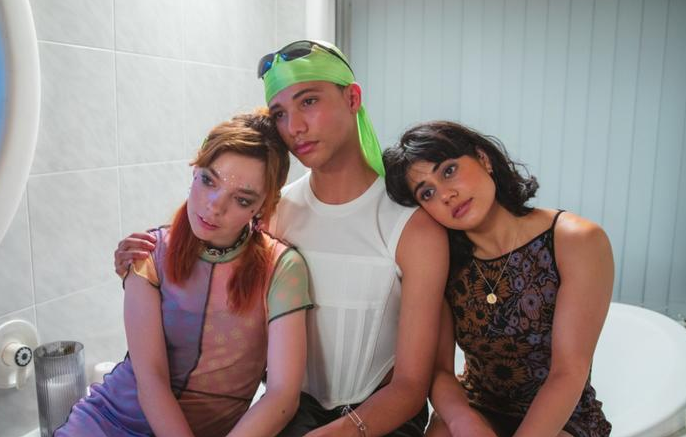 On September 14, 2022, all eight episodes of Heartbreak High were put on Netflix for the first time. The 2022 TV show is a remake of an Australian show with the same name from 1994, but it is about a different group of people.

Both shows are about the lives of young people at Hartley High School and how they deal with friendships, love, sexuality, identity crises, and heartbreaks.

Ayesha Madon, who plays Amerie, and Asher Yasbincek, who plays Harper, are the main characters and best friends in the 2022 reboot. Thomas Weatherall, who plays Malakai, Chloe Hayden, who plays Quinni, James Majoos, who plays Darren, Will McDonald, who plays Ca$h, Rachel House, who plays their “woke” principal Woodsy, and a few others also play important roles.

The main idea of the show is that Amerie and Harper used to be friends, but they broke up at the beginning for reasons we don’t know. The trailer makes it look like the “Incest Map” leak had something to do with this huge breakup. But that’s not even close to the whole story. It’s just a coincidence that something happens at the wrong time.

One question stays with you until the end: What happened at the music festival that pushed Harper over the edge? No matter what it is, it tests the two’s long-standing, close relationship. So, what does it all mean? Do the two people get back together and become friends again? Does Harper ever tell us what is making her sad?

And what about the other main characters who are also going through heartbreaks? What happens to Malakai? Do the police ever catch Ca$h? Does he ever tell Darren how he feels about him? Also, will there be a second season of Heartbreak High to fix the mess that was left at the end of the first one? If you want to know the answers to all of these questions, you should read on, because we’ve broken down the show’s ending for you.

To understand the ending, you have to go back to the beginning, which is what Heartbreak High does. It takes us back to that music festival, which was the night that everything changed. Since the beginning, it’s been kind of clear that Harper has been through a lot of bad things, which is why she keeps making bad decisions.

The title of the last episode, “Three of Swords,” is a jab at what the fortune teller told her when she pulled this tarot card at the festival. The three swords that go through her heart are a sign of “grief, loss, and heartbreak.” Whether you believe in it or not is up for debate, but Harper’s life at home has been turned completely upside down, and it’s because of these three emotions.

After Harper and Amerie get separated at the festival and take the drugs they got from the “eshays” at the beginning, she loses consciousness and everything starts to look like a blur. The drug dealers then take her away. Ca$h is driving, so when they stop at a gas station, he secretly unlocks the car, giving her a chance to escape and live.

She walks back home and stops by Amerie’s on the way. But Spider was in her room at the time, so when Harper knocks on her door, Amerie doesn’t open it. Harper doesn’t want to go back home, but she has no choice. When she gets there, she finds an even bigger problem.

This is the first time the show shows the well-kept secret that her father had a mental disorder that made him think his own daughter was a wolf and attack her. Harper’s night keeps getting worse, so she goes home and locks the door. The next morning, she shaves her head, probably because she doesn’t want to remember how one of the boys who sell drugs pulled her hair to stop her the night before.

Amerie is worried about her friend’s safety after hearing the whole story, so she doesn’t want her to go back to her house. Malakai is back from his peaceful retreat, and even though he and Amerie agreed to stay friends, it’s clear that they still care about each other.

Hartley High finally gets the happy ending it deserved when Miss Jojo comes back to teach English and SLT. And it’s at the end of this session that Ca$h finally runs into the classroom and tells Darren he loves him forever, just before the police catch him. The other “eshays” are also locked up for now, while Ca$h sends Harper a video of the night in question, which she uses to build her case. Chook, who was the main person responsible, wasn’t on the video, so he couldn’t be caught.

In the last scene of the episode, Harper doesn’t care about the police. She has her own way of getting him to pay, and she starts breaking his car with all her strength. Amerie tries to stop her, but she ends up going with her. To top it all off, Harper sets fire to Chook’s car, and the two of them barely get away before the car’s owner catches them.

By the end of the finale, each member of their inner circle—Amerie, Harper, Darren, Quinni, and Malakai—had found their own happy ending, but Ca$h’s situation still makes us wonder. Putting that aside, we can say for sure that, come hell or high water, Amerie and Harper are back together and nothing will stop them from being friends again.

The end of Heartbreak High was full of drama, which wasn’t very surprising. Harper (Asher Yasbincek) hitting Amerie (Ayesha Madon) in the first episode pretty much set the tone for the rest of the season.

As the show moved toward the end, Amerie found out some important things in the second-to-last episode. She finally recalled what had happened at the festival the night before. Her memory was temporarily wiped clean by a mix of alcohol and drugs, but she was able to get it back with sobering clarity.

Because of her embarrassing hookup with Spider (Bryn Chapman Parish) while she was drunk, Amerie ignored Harper when she banged on her bedroom window late at night and asked to come in. She didn’t know at the time that her choice would affect Harper in a big way and set off the events that started the series, including the end of their friendship.

Why did this seemingly harmless act make Harper and Amerie fight so much? As the first season of Heartbreak High comes to a close, everything will become clear.

Amerie’s talk with Harper brings out the truth about Harper, which is how the finale starts. Amerie goes to Harper’s house to find out what happened now that she remembers. There, she sees that Harper has stabbed her dad and is covered in blood (more on that later).

The two finally talk about Harper’s strange behavior over the past few weeks, which can all be traced back to that fateful night at the festival. While Amerie almost had sex with Spider at the end of the night, Harper was dealing with something much worse than a shameful mix-up with the school jerk.

After her phone dies and she gets separated from Amerie at the festival, Harper starts drinking more and more. She ends up in the car of Chook, a local bad boy and drug dealer, who she didn’t know was a drug dealer (Tom Wilson). She wakes up in the back of the car, between two of Chook’s friends who are touching her.

Heartbreak High is a show that takes place in Australia. It is a remake of a show with the same name that aired in 1994 and ran for seven seasons.

The main character, Amerie, is an outcast at her high school. Her situation gets worse when the authorities find a mural she and her best friend, Harper, made that shows the sexual histories of many of her classmates.

Amerie and Harper have been friends since they were kids. They have been there for each other through good times and bad. They are best friends and have been writing in secret on a wall about hookups between people in their classes.

The day the wall is found, Amerie decides not to say anything about Harper’s part in it. As a result, the rest of the school treats her badly.

When Harper goes back to school, she has short hair and won’t talk to Amerie. Amerie tries to figure out what’s wrong. Soon, she gives up hope and thinks this means that their friendship is over.

Amerie makes new friends with Quinni and Darren, who were the only ones who would talk to her after what happened. Quinni is a lesbian, and Darren isn’t a man or a woman. Both of them add their own quirks and perspectives to the story.

After the mural is found, many of the students are also forced to attend SLT classes. Even though the classes start off on a bad note, they soon become a safe place for the students.

Soon, Amerie, Quinni, and Darren find a second mural under a desk. This one keeps getting bigger and bigger in the same way.

Amerie kisses Dusty, who has been her long-time crush, and things seem to be going well until she senses that he is seeing Harper.

Teenagers like Amerie and Harper and Malakai and Spider get into fights. Each person has their own stories going on inside of them and links to other people.

There is never a dull moment in Heartbreak High because there is romance, drama, rumors, and a lot more gossip going on among the teens.