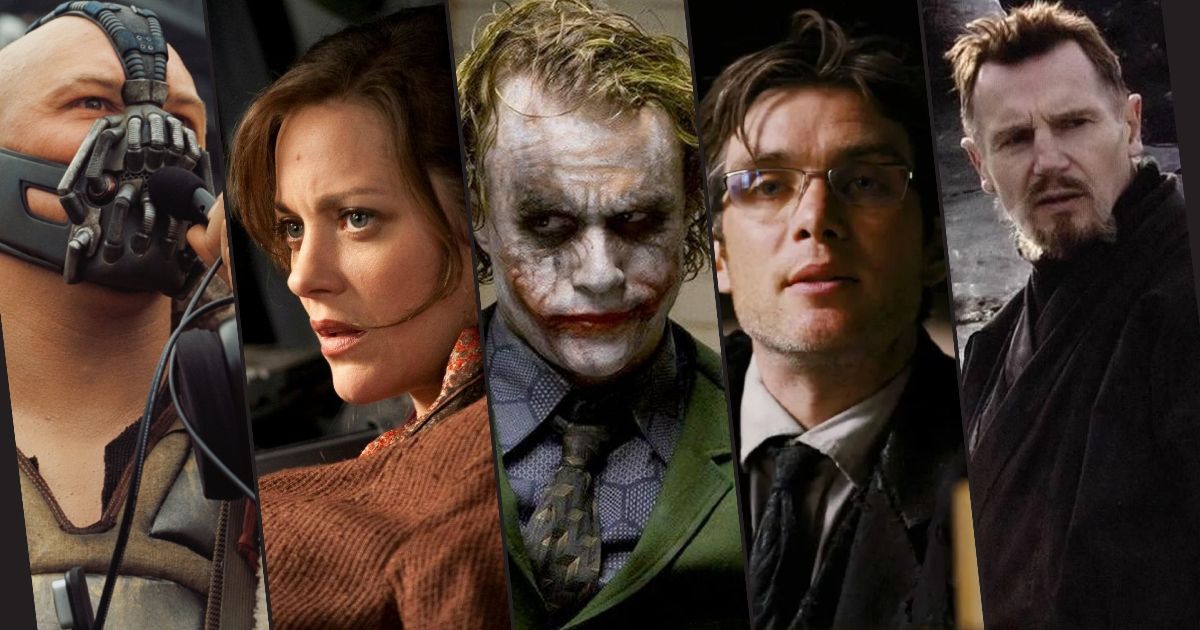 Christopher Nolan’s The Dark Knight trilogy, starring Christian Bale as the Caped Crusader, is regarded as one of the best-ever Batman movie franchises in the character’s on-screen history (per Looper). Indeed, the trilogy was a triumphant marriage of Nolan’s trademark cinematic style and flawless character portrayals by the likes of Bale, Cillian Murphy, and Heath Ledger, among many other big Hollywood names.

Part of what made The Dark Knight an execeptional piece of superhero media was its portrayals of various major Batman villains. It goes without saying that every superhero movie generally needs to introduce a supervillain who will inevitably wreak havoc and tantalize the hero in every way until the end. When it comes to Nolan’s The Dark Knight universe, plenty of villains made their marks on Gotham and Batman. Here’s how they all rank.

Talia Al Ghul gets introduced as Miranda Tate in The Dark Knight Rises, who also happens to be a board member of Wayne Enterprises. Played by Marion Cotillard, Talia Al Ghul is a femme fatale who is initially introduced as Bruce’s love interest. Soon, of course, the truth about her true origins and motivations unpacks, and she is revealed as Ra’s Al Ghul’s daughter, who has returned to Gotham to accomplish her father’s wish of annihilation. That said, Talia herself did little to no harm to the city in The Dark Knight Rises, operating instead in the shadows and letting Bane be the face of her master plan. As such, she was relatively a lesser threat to the Caped Crusader.

Two-Face was the alter ego of Gotham attorney Harvey Dent (played by Aaron Eckhart) in The Dark Knight. Primed with a tragic character backstory, Two-Face was one of the darker villains in Nolan’s Batman trilogy precisely because of how he represented one’s downfall in the face of tragedy, pain, and loss. Dent started out as an attorney who vehemently believed in the criminal justice system, but when Rachel dies, he begins to see the cracks and ultimately loses faith in justice. The figurative trigger was pulled by Joker, and was, ultimately, enough to turn the once decorated White Knight of Gotham into the paranoid corrupt criminal who left the fates of his victims up to chance.

Jonathan Crane a.k.a The Scarecrow first introduced in Batman Begins as a seemingly unassuming psychiatrist, who, with cunning, came close to killing Batman. Impeccably portrayed by Cillian Murphy, Scarecrow harnessed the fears of his victims by intoxicating them with a hallucinogen dubbed “Fear Toxin”, a type of drug that created fear of everything and anything around its victim. Specially fabricated from a rare blue Himalayan flower, Crane intended to intoxicate the entire decaying Gotham with his hallucinogen. Of course, his wicked plans are eventually crushed by The Dark Knight. As the first villain in Nolan’s Batman trilogy, Scarecrow set the tone for the grittier and more thrilling franchise.

Liam Neeson’s Henri Ducard a.k.a. Ra’s Al Ghul is initially introduced as a mentor to Bruce in Batman Begins, who equips him with the skills that ultimately helped him to become the Caped Crusader. Soon after, however, the character is revealed as the prime antagonist, someone who envisages nothing but the destruction of the crime-infested Gotham. Naturally, despite being a formidable adversary to Batman, the League of Shadow leader Ra’s Al Ghul meets his end. However, his scheme of eliminating the city of Gotham lived on with the help of different villains like Bane and Talia.

Bane from The Dark Knight Rises, portrayed by Tom Hardy, is the sole villain in the entire trilogy who was able to physically overpower Batman and, what’s more, accomplish more of Gotham’s destruction. Indeed, Bane destroys Batman in unprecedented ways, from bankrupting his enterprise to breaking his back, which makes him a formidable foe in Nolan’s The Dark Knight trilogy. The somewhat disappointing reveal that Talia was, in fact, the mastermind behind all of Bane’s actions all but holds him back from taking the top spot on our list.

The Dark Knight featured Heath Ledger’s Joker as not just the best villain of Nolan’s Batman trilogy, but also the best superhero movie villain for years to come. Ledger’s interpretation of Joker was so horrifyingly authentic that the actor earned a posthumous Academy Award for his performance. Indeed, the actor left big shoes to fill for character, who has since been played by Joaquin Phoenix in Joker and, briefly, Barry Keoghan in The Batman. Ledger’s Joker set the ultimate bar for all Batman villains to come precisely because of his complex nature and inherently evil motivations. He was unbridled chaos personified, and proved a true physical and psychological test for Batman in ways that left him scarred thereafter.