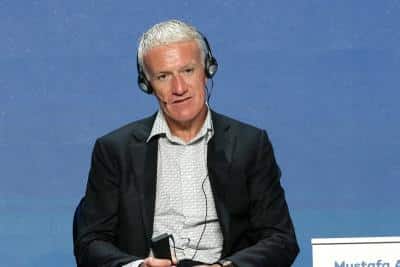 <br>Deschamps’ future were not a matter for discussion on Monday, as the team travelled back to Paris.

However, French Football Federation (FFF) President Noel Le Graet does not want to waste any time, and he is seeking clarity so has promised to call Deschamps by Wednesday at the latest, Le Graet told French broadcaster BFMTV.

“I will call him tomorrow or the day after tomorrow when he has recovered, too. We will see each other as soon as possible, of course,” he said on Monday.

Deschamps’ contract is up, but it is widely expected there will be another deal on offer if he wishes to stay on and target Euro 2024 success.

The France coach said on Sunday night in Qatar that a decision about his future was one for early in the new year.

Former Real Madrid boss Zinedine Zidane has long been linked as the likely next national team coach, but he may have to wait a while longer if Deschamps decides he still has the hunger required for the job.

Former midfielder Deschamps has completed a decade in charge of Les Bleus, and said on Sunday when asked about his future with the team: “You’re not the first to ask. Even if we had won, I would not be able to answer that tonight.”

Deschamps, however, will take his time to weigh up whether to extend his 10-year stay with the two-time world champions.

“Of course, I am very sad for the players and staff, but I’ll have a meeting with the (FFF) president at the start of next year and then you’ll find out.”

France were beaten 4-2 on penalties after a dramatic 3-3 draw against Argentina, with Kylian Mbappe hitting two penalties in a rare World Cup final hat-trick but still ending on the losing side.

Meanwhile, Deschamps said his men had lacked the energy of previous matches, leading to their defeat to Argentina on Sunday.

“For the first seventy minutes, we were playing a dynamic, aggressive opponent and we were not at their level. Nevertheless, we came back magnificently. We could have won it too and I’ve some regrets because we came so close,” he added.

“But congratulations to Argentina, they’re a team of great quality and played aggressive, cunning football,” he said.

France were aiming to become the first team to retain the World Cup in 60 years while Deschamps could have become only the second coach to win back-to-back titles with a triumph. Both the feats did not materialise.

Deschamps added the French team had been in a tricky situation for a while.

“We were not as good as we could have been. Against a strong opponent, some of our players lacked energy. We brought in fresh legs and managed to come back, keeping the dream alive, but unfortunately at the end of the day, we could not achieve the dream,” he said.

Kylian Mbappe winning the Golden Boot with eight goals was a small consolation for France.

“It was a scintillating, magnificent performance by Kylian. He left his mark on the final, though it did not end in the way he would have liked it to. That’s why he was so disappointed in the end,” he added.