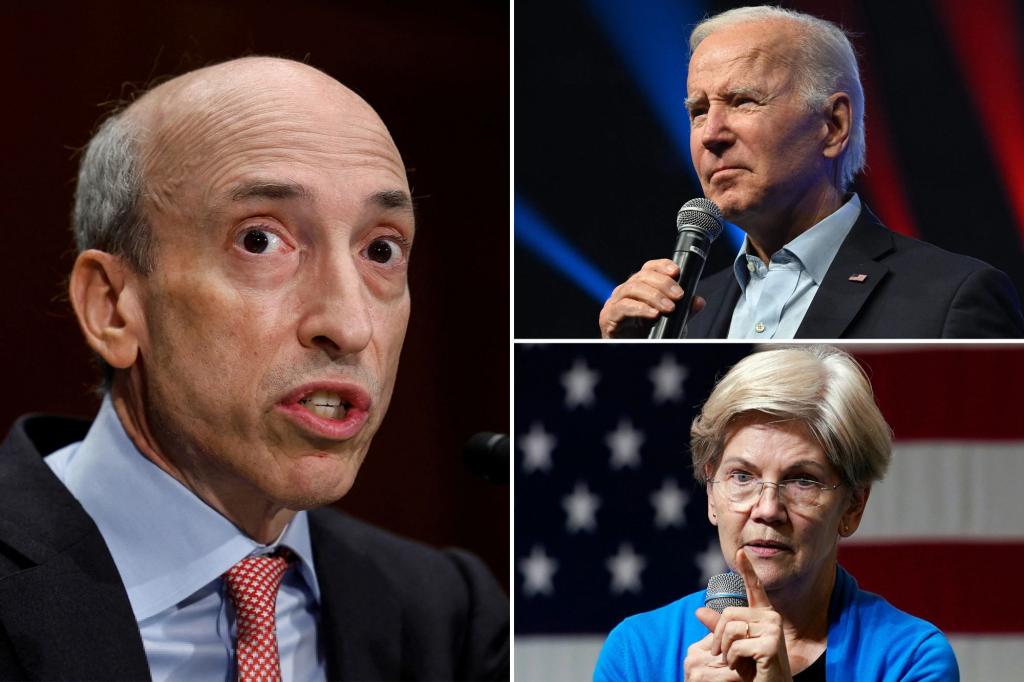 It’s always dangerous to divvy up the spoils of war before achieving victory, but the GOP’s congressional leadership appears to be moving in that direction anyway.

So confident they will take the majority in the House and probably the Senate in Tuesday’s midterms, key members have been quietly plotting how to make life difficult for the Biden administration, particularly on its radicalized economic agenda.

Sure, even in the best-case scenario (winning both chambers), Republicans will face long odds pushing through new legislation. They still need President Biden’s signature and will likely lack a ­veto-proof majority in the Senate.

Yet people who have spoken to GOP leadership tell me plans are taking shape to attack economic policy enacted while Biden and the Dems enjoyed a majority in Congress for two long and disastrous years.

Again, nothing revolutionary, but Republicans feel they can shape the debate. Put bills on Sleepy Joe’s desk demanding he end his war on domestic oil production, which has helped fuel massive inflation, and others to loosen his anti-business regulatory agenda that has stymied growth as the economy falls into recession.

They will block lefty nominees to key Cabinet and regulatory posts that need Senate approval (bye-bye to far-left telecom lawyer Gigi Sohn at the FCC), and wield Congress’s power of the purse (no more stimulus checks or tax increases) to reduce spending and spur some growth.

Then Republicans will turn to another regulatory agency: The Securities and Exchange Commission.

Gary Gensler, a former Wall Street banker and academic, is the chair of the agency, appointed by Sleepy Joe nearly two years ago supposedly to protect investors from scammers.

Instead, Gensler is transforming the SEC in ways not even moderate Dems on Wall Street had ever imagined. He’s launched an all-out war against the crypto industry that is stifling innovation because developers don’t know if their digital coins associated with block-chain technology will result in an SEC lawsuit. He wants to remake the structure of the stock market that appears to be working just fine because progressives think Wall Street is making too much money.

And that’s probably not the worst of it.

He and his Dem colleagues on the commission approved a cockamamie set of standards imposed by the Nasdaq stock market that is intended to make every listed company disclose and meet progressive board-diversity mandates. (Noticeably exempted: All those Chinese companies listed on the exchange as Nasdaq slipped in a loophole where they can skip appointing members of the country’s oppressed ethnic minorities.)

Now he wants to make the Nasdaq model de rigueur across corporate America. In documents to investors, Gensler wants public companies to make sweeping disclosures on how they are reducing their carbon footprint, on top of revealing the racial and ethnic makeup of their workforce.

Its questionable how any of this gets to the SEC’s core mission of protecting investors, or leads to better-run companies. But with Dems in charge, Gensler is full steam ahead as he seeks to kiss up to progressives, including his patron, lefty Massachusetts Sen. Elizabeth Warren. Gensler is angling to be Treasury secretary when the current occupant, Janet Yellen steps down as expected next year.

A Republican congressional sweep ­negates the Gensler Treasury possibility, I am told. The Senate will hold hearings on what the GOP believes is his radical transformation of the agency.

He and his deputies will face scrutiny by the House Financial Services Committee that would be run by North Carolina Republican Patrick McHen­ry, as well as questioning by subcommittees. By keeping Gensler and his lackeys on the Hill, they will have less time to muck up the markets.

In the Senate, plans are also in place to put so-called riders on must-pass spending bills to zero out Gensler’s ESG/diversity stuff. Biden will have a choice of either agreeing to the partial defunding of SEC activities and signing spending bills, or face a legislative stalemate.

Another set of hearings will target the corporate enablers of the Dems’ progressive economic agenda. Retiring Pennsylvania Republican Sen. Pat Toomey has been requesting information from companies involved in Environmental Social Governance investing, which is a big moneymaker on Wall Street but, he believes, anti-consumer and politically fraught.

Toomey and top Republicans believe this investment method has forced companies to adopt progressive positions on the environment and other contentious issues at the worst possible time. By late 2021, inflation and gas prices in particular were already spiking because of Biden’s anti-drilling energy agenda while pandemic lockdowns ended.

Once in the majority, Republicans will have subpoena power over massive asset managers, and to compel Wall Street firms to turn over the information and defend their practices at public hearings — which I am told is the plan.

Of course, all bets are off if the GOP loses Tuesday. the task of squeezing Biden’s leftward lurch on the economy becomes more difficult if the GOP takes just the House.

But Republicans are thinking big and, if they’re right, let’s get ready to rumble!