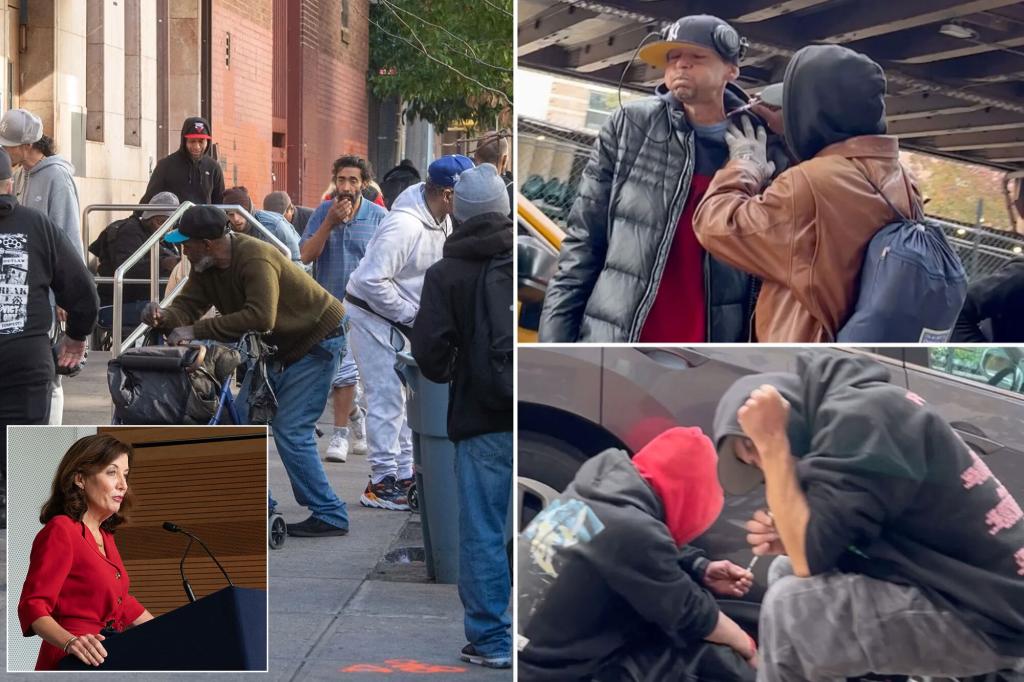 Progressive policies funded and foisted on the Big Apple by Gov. Hochul and her left-wing allies have caused a legion of drug-addicted zombies to descend on East Harlem and transform parts of the neighborhood into lawless, open-air shooting galleries, neighbors and critics told The Post.

The real-life horror show plays out daily in the neighborhood’s gritty streets where The Post witnessed dozens of raving, hunched-over junkies commandeering East 126th Street — now the home of a controversial public-injection site — as drug dealers hovered nearby like vultures.

Others along Park Avenue down to East 114th Street have been spotted nodding out, splayed on the sidewalk, and injecting themselves in the neck or through jeans in broad daylight.

“I almost hope a Republican governor wins, so that way they come and knock this all out,” said community developer Derrick Taitt, referring to Tuesday’s general election. “The Democrats have done nothing for us. Nothing!”

Residents and a top community board official say the shocking scene — hordes of addicts jabbing themselves in front of grade schoolers, a swelling sea of syringes littering the ground — is a direct result of a “harm reduction” legislative package peddled by left-wing Albany Democrats. It was signed into law in October 2021 by Hochul, a once-moderate pol eager to appeal to her party’s woke wing just months after she took office.

A directive, citing the new law decriminalizing possession of needles, also ordered cops not to arrest addicts shooting up in public.

“Gov. Hochul opened up the floodgates to the ruination of the state when she signed laws allowing for open-drug use on our streets and subways,” said Councilman Robert Holden, a moderate Queens Democrat.

“Instead of focusing on drug addicts getting the help they desperately need, she allowed them to feed their addictions while destroying the quality of life for New Yorkers. Whether it’s this, cashless bail, Raise the Age [juvenile justice law], the [Humane Alternatives to Long-Term Solitary Confinement] Act, congestion pricing, and others, Kathy Hochul must be held accountable for the 14 months of destruction she caused New York,” added Holden, who is backing Republican Rep. Lee Zeldin in Tuesday’s gubernatorial election.

OnPoint NYC, which operates the year-old East Harlem overdose prevention center and another in Washington Heights – the first of their kind in the state — was created in March through the merger of two other nonprofits, records show. Both sites opened in November 2021, and their operators have said they hope to expand to 24/7 services.

The centers provide users with paraphernalia to snort or shoot up drugs within its walls and have staff to monitor clients in case of an overdose and to advise on best injection techniques. It claims to have saved more than 500 people’s lives from fatal overdoses in the past year.

But the East 126th Street injection site has been a magnet for attracting drug dealers, who brazenly sell dope and other narcotics to addicts, including those who are running across the street to shoot up under OnPoint’s supervision, residents said.

The staff “don’t supply the drugs for them, so they have to go out and get the drugs,” said Jim Ratti, 70, who lives across the street with his 18-year-old son. “So where are they coming to buy the stuff? In my building.”

Ratti added that he’s seen vans operated by OnPoint handing out needles to users in the neighborhood.

One resident of seven years, who regularly sees a group of 13 dealers and users congregating across her block on 126th Street, feels hopeless.

“The police came; they saw the selling happening, across the street; they made an arrest,” she said. “Twenty minutes later, those same guys that I see every day selling were back.”

Start your day with all you need to know

Drug arrests for the 23rd and 25th Precincts, which cover East Harlem, are down 10% and 26% respectively, from January through October, compared to the same period last year, police data shows.

“The Commanding Officer of the 25th Precinct is aware of community complaints involving drug and narcotic use in the confines of the precinct and is working to address them,” an NYPD spokesperson said.

“Unilaterally taking the steps that each of the agencies and the other elected leaders in Albany did … without changing the laws to require people to enroll [in drug treatment programs] is only continuing the drug problem,” said Manhattan Community Board 11 Vice-Chairman Xavier Santiago, whose board oversees East Harlem and other parts of Upper Manhattan.

OnPoint claims it relies on private funds to operate because public funds by law can’t be used to run overdose prevention centers in the state.

However, its precursor nonprofits New York Harm Reduction Educators and Washington Heights CORNER Project, pocketed nearly $3.4 million in state funds the past three years – including more than $1.4 million this year alone while Hochul was in office, records show.

Both nonprofits have also received nearly $2 million in discretionary funds during the past three years from the City Council, including $25,000 for this fiscal year from Democratic socialist Kristin Richardson Jordan of Manhattan, records show.

Sam Rivera, OnPoint’s executive director, said any public funds the nonprofit gets are used to support other programs it runs beyond the “safe [drug] consumption program,” including food assistance and mental health services.

Councilwoman Diana Ayala (D-Manhattan/Bronx), whose district includes East Harlem and who recently introduced a City Council bill to pay drug users for used needles, said she shares her constituents’ “frustration” about the pervasion of public drug use, but believes OnPoint is helping address the problem.

“It breaks my heart when people complain about open drug use,” she said. “We shouldn’t be arresting our way out of the opioid crisis, and when we offer alternatives, people push back.”

Residents describe daily life over the past year as a needle-filled nightmare.

The Sanitation Department said it’s collected at least 5,660 needles in the neighborhood since the East Harlem injection center opened on Nov. 29, 2021 — nearly double the 2,865 collected over the previous year.

“I’m a lefty liberal from way back when … and I’m so fed up,” said local artist Jenny Scobel, 67, who has recorded several videos along Park Avenue near 116th Street of men passed out while others inject themselves in broad daylight.

“I don’t hate Hochul, but I think she’s made some big mistakes … She’s gotta wake up.”

Hazel Crampton-Hays, a Hochul spokeswoman, defended the governor’s record, saying the East Harlem site “is not a state-regulated facility, and we continue to work closely with the city, law enforcement, and public health officials to combat the opioid crisis that has killed thousands of our fellow New Yorkers.

“While the state has decriminalized the possession of needles and syringes and the possession of opioid antagonists to save lives, heroin remains illegal, and nothing in the law prevents police officers from enforcing other criminal conduct and violations of the law that may take place, and we continue to work with prosecutors to enforce the law and crack down on traffickers and those who peddle deadly illegal substances,” she added.