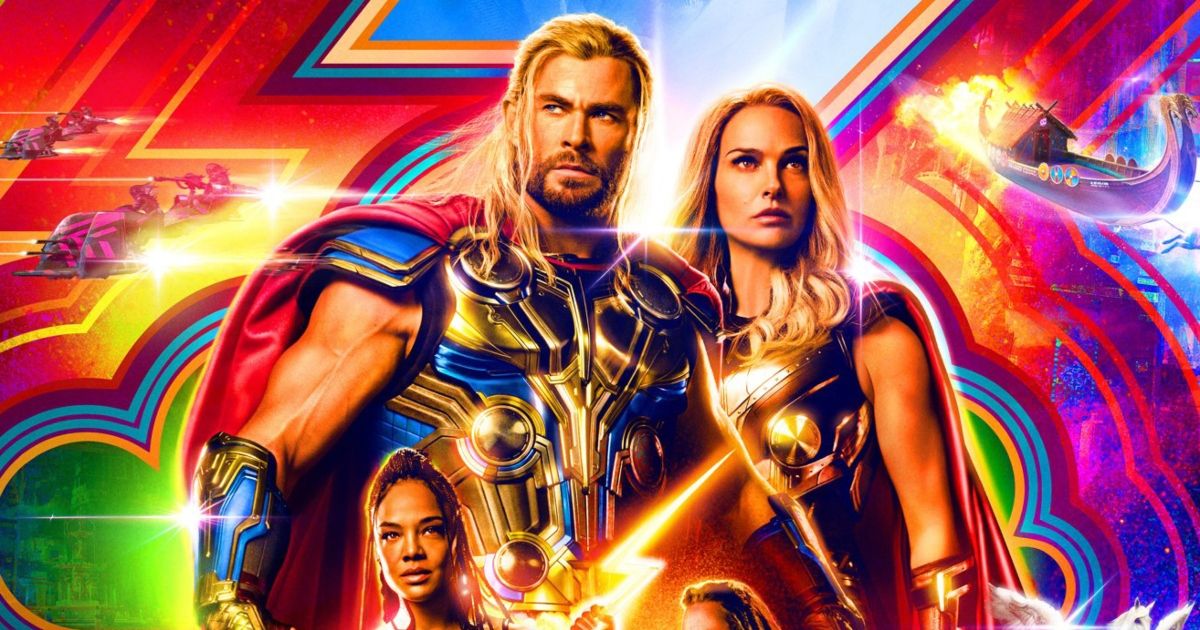 Thor has had quite the journey in the MCU. A tragic hero by every measure, the God of Thunder has lost everything he holds dear, but nonetheless perseveres. Much of Thor’s story development and growth is due to Chris Hemsworth collaborating with Thor: Ragnarok director Taika Waititi. After five appearances as the God of Thunder, Hemsworth informed Waititi he was bored with the character which Waititi echoed, as Goliath reports. With the third installment of the Thor saga came humor and chaos amidst tragedy.

In the aftermath of Avengers: Endgame, the legend of Thor was left wide open. The first solo superhero film in the MCU to get a fourth installment, the pressure was on for the studio, the director, and the cast of Thor: Love and Thunder. As the Avengers were virtually disassembled, it was pertinent that Thor’s story moved forward in a way that both honored his time with the Avengers and focused on his future. By flying off into the sunset with the Guardians of the Galaxy, both Thor and the Guardians could begin anew in the MCU. Whatever fans and critics may feel about the fourth installment, Love and Thunder is ultimately one of the MCU’s most endearing movies, offering a symphony of love stories, new landscapes, and plenty of laughs out loud moments.

As the MCU continues to expand, so do the characters and planets audiences meet. Until Guardians of the Galaxy, audiences hadn’t seen worlds beyond Asgard or the Nine Realms in the Thor films, nor had they met other MCU gods. Omnipotence City shifts what audiences understand about the gods and worlds mentioned in previous films. The city was first introduced in the Thor: God of Thunder Vol. 1 #3 comics, as Looper explains. In Thor: Love and Thunder, Omnipotence City is home to all the gods of the universe. Covered in gold and marble, the gods gather for orgies, as Zeus (Russell Crowe) quips.

Related: Thunder: What the Introduction of Omnipotence City Could Mean for the MCU

Back on Earth, New Asgard has grown from a tiny village into a bustling tourist attraction. King Valkyrie (Tessa Thompson) is a spokesperson for Old Spice, a diplomat, and recently opened a new ice cream shop called Infinity Cones. Among the many ma-and-pop shops in New Asgard, tourists can see a thriving local theater production, go on Viking ship tours, and see Mjölnir in all their brokenness. For New Asgard to begin as a tiny fishing village and turn into a bustling tourist attraction is reflective of Thor’s personal growth through the MCU. As much as Asgard has been broken and rebuilt, so has Thor.

Each of Thor’s MCU appearances has been overshadowed with some loss, whether it’s Loki falling into a wormhole or not going for Thanos’ head. During the introduction of Thor: Love and Thunder, Korg (Taika Waititi) explains that Thor is hanging up Stormbreaker to find his inner peace. On the way to save the children on Asgard, he explains that his attempts to find inner peace via meditation only made him angrier. But every cloud has a silver lining, as Thor discovers. When something that others claim to be a lifesaver doesn’t necessarily work its promised wonders, it could be a sign to find an alternative.

Gorr: Creepiest Villain in the MCU Since Loki

The MCU’s villains have been devious, genocidal, and downright evil, but none have been creepy in the way Christian Bale portrays Gorr the God Butcher in Love and Thunder. In the Thor saga, Loki was a persistent thorn in his brother’s side, often playing the anti-hero and stabbing his brother for no reason. But his entrance in The Avengers was downright creepy. As Gorr wields the Necrosword, he can slay gods with ease. In addition, he can also disappear into shadows, aiding in his ability to attack gods. Yet, his real advantage in his surprise attacks is his control of the shadows to create creepy monsters that are strong enough to restrain and throw Thor around like a rag doll. Even when Gorr spoke, his voice was spine-chilling.

MCU fans ubiquitously agree that many of the romances have felt forced, especially Thor and Jane’s relationship, as Screen Rant details. Even Odin and Loki share their disdain regarding Thor and Jane’s relationship in Thor: The Dark World. As Thor has spent much of his journey healing, he comes face to face with everyone’s biggest fear: running into an ex. Several aspects of their reunion feel realistic: the awkward tension, residual feelings, and mutual respect. Even when Thor tells Jane, “I love you,” the delivery is sentimental and organic. Portman and Hemsworth’s acting in these scenes is reminiscent of some of the greatest love stories in film, and it was about time Marvel Studios gave fans a beautiful love story with an original Avenger.

At 2019’s San Diego Comic Con, five years after The Mighty Thor’s comic book debut, Marvel Studios announced that Natalie Portman would be returning as astrophysicist Dr. Jane Foster and introducing The Mighty Thor. This announcement would be the first time in MCU history that a woman character would share a male character’s mantle. Dr. Jane Foster and The Mighty Thor are impeccable. First, she rips a page from her own book and punctures it with a pen to help someone understand wormholes. To cure her cancer diagnosis, she travels to New Asgard and repairs Mjölnir, which in turn transforms her into The Mighty Thor. She also suggested that Stormbreaker could be used as an energy course to find the captured children. Of course, her greatest moment is when she, after spending the film trying out different catchphrases, finally tells Gorr, “Eat my hammer!”