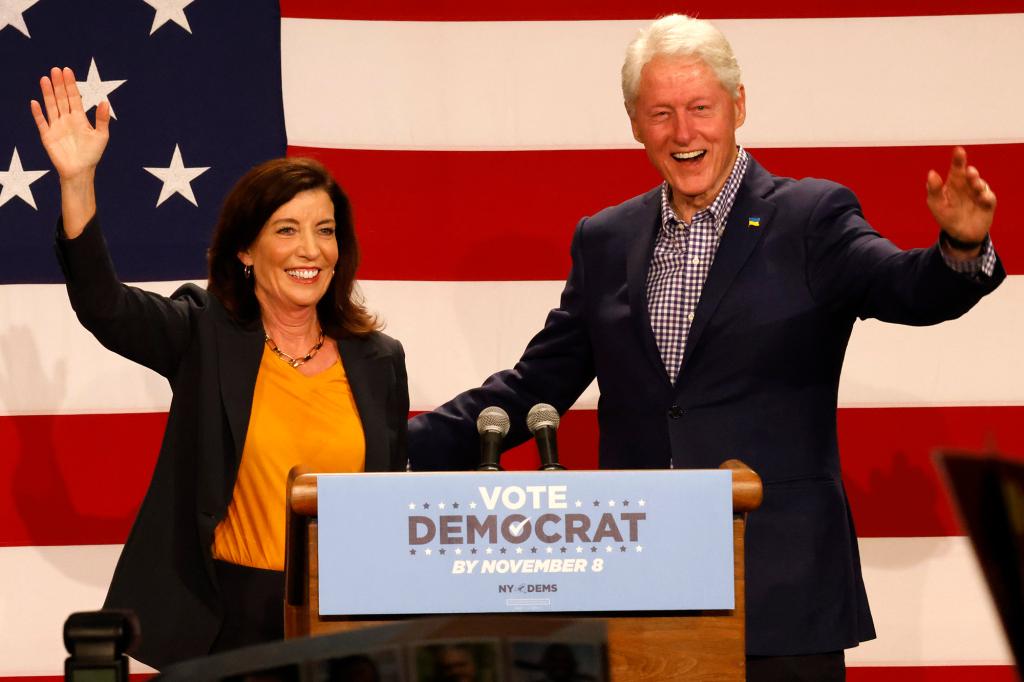 Top gun Democrats swarmed the Big Apple Saturday in a desperate bid to boost Gov. Kathy Hochul in the final days of her race for re-election against GOP rival Rep. Lee Zeldin.

Former President Bill Clinton and Senate Majority Leader Chuck Schumer were among the Dems rallying in Brooklyn for Hochul in a frenzied effort to stave off Zeldin’s momentum ahead of Tuesday’s midterm elections.

“Lee Zeldin makes it sound like Kathy Hochul goes to the nearest subway station, passes out billy clubs and baseball bats,” the former president said. “Looks like he’s looking to replace Dwayne Johnson in all his movies.”

Mayor Eric Adams — who notably left his campaign appearance for the governor off own official schedule — declared that he “will fight every day to make sure Kathy Hochul goes back to Albany.”

“This is the governor the state of New York needs right now,” Adams said.

The rally at City Point, a mall in downtown Brooklyn, was one of a sudden slew of New York City campaign events for Hochul, who is in a neck-and-neck race with the Long Island congressman.

About 300 Hochul supporters — many of them union members from the SEIU and the Hotel Trades Council — crowded into an unfinished warehouse-like space to hear Clinton and the other Dems speak.

Schumer, who brought his 3-month-old granddaughter Eleanor along, warned the crowd that Zeldin is “an ally to the worst president of the United States.”

“I don’t want my granddaughter to grow up with less rights than her mother did,” the senator said, referring to the Supreme Court’s Dobbs decision that returned abortion legalization back to the states.

Earlier, Hochul greeted a group of fewer than 150 sign-waving supporters at the Royal Queen restaurant in Flushing, Queens.

“I’m okay with four more years, that sounds good to me,” she said.

“Who does that? What kind of person will not stand with this community when they are under attack? That is shameful,” Hochul said.

But at her first stop of the day, a disorganized drop-in at Queens’ Sunnyside Greenmarket, the governor struggled to make herself heard above the shouts of a female heckler who gave her name as “Freedom” and held up a hand-lettered sign slamming Hochul for the tragic death of a young mother killed by her out-on-bail ex.

“Say her name Kathy Keaira Bennefield / Dead by no cash bail” read the placard, as the woman yelled out “Vote for law & order” and “Vote Lee Zeldin.”

“This woman is dead because of Kathy Hochul,” the protester told a reporter. “Where’s the outrage?”

Hochul ignored the catcalls as she wandered through the market, pausing at one point to buy a package of gluten-free chocolate chip cookies from a Hudson Valley bakery.

The governor had better luck getting her message out during a stop at the Guy R. Brewer Democratic Club in St. Albans, where she slammed Zeldin as “one of Trump’s biggest supporters” before about 140 sign-waving party members.

The rush of activity at the tail end of Hochul’s largely hands-off campaign came as Politico reported that an internal campaign poll is giving the governor less than 50% of the vote – a dangerous position for any incumbent.

“Any election can go a different way,” Hochul told reporters during a stop at Brooklyn’s Grand Army Plaza Greenmarket. “That’s why I’m out here.”

The governor insisted that “the tide is shifting” in the campaign.

“I have what it takes to be the governor of this state and not take us backwards,” she said.

“We are resonating with massive groups of New Yorkers from all walks of life,” he told a crowd of about 150 voters in Mahopac in Putnam County.

“We have to save this state,” he said, repeating a favorite campaign theme. “New Yorkers are fleeing New York more than we see people fleeing any other state across the country.”

In Hopewell Junction, he spoke to about 200 supporters through a bullhorn from the bed of a flag-adorned pickup truck, while in Poughkeepsie, about 125 turned out.

Zeldin was set to tout the endorsement of Tulsi Gabbard, the former Hawaii congresswoman who renounced the Democratic Party this year, Saturday evening at a rally in the Orange County town of Goshen.