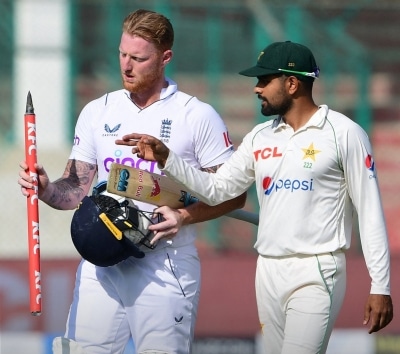 Karachi, Dec 21 After a dominating 3-0 Test whitewash over Pakistan, Ben-Stokes led England are aiming to continue their winning run and win back the all-important Ashes against Australia next year.

England finished their obligations for 2022 when they wrapped up their first Test series in Pakistan for 17 years cruising to victory in the third and final Test in Karachi on Tuesday.

It completed an impressive eight-month period since McCullum was appointed coach and Stokes took the reins from Joe Root and was promoted to Test captain, with the team’s results during that phase unrivalled. Everything McCullum and Stokes have touched in recent times has turned to gold.

England lost just once while completing impressive Test series triumphs over New Zealand, South Africa and Pakistan and even had time to win the postponed Test against India in Edgbaston during a dominant period of red-ball cricket.

While the ICC T20 World Cup title they won in Australia last month may have been their crowning moment of 2022, England’s Test form has been just as imperious. However, they are already out of contention for next year’s ICC World Test Championship prior to McCullum and Stokes’ burgeoning partnership.

But that may work in England’s favour when they attempt to win back the Ashes from Australia for the first time since 2015 when the two arch-rivals meet on English soil in the middle of next year.

“I don’t like looking too far ahead but I obviously have my eye on The Ashes in 2023,” Stokes told Sky Sports after completing the Test whitewash in Pakistan.

”We will continue to grow as a team, spend more time together, keep trying to have fun, play Test cricket with a smile on our faces and try to win as much as we can,” he added.

Having fun is something that has been paramount to the recent success of England and Stokes said he will continue to find ways to keep his teammates invigorated and enjoying what they do.

“It is a great time to be in this dressing room and a great time to be playing for England. I’m just encouraging everyone to turn up every day and enjoy what you’re doing. Obviously, it is easier to do when we are winning the way we are at the moment,” the all-rounder said.

“The real test will be when things don’t go so well and that will be the time to make that even more of a thing for us to take out there. But I hope we don’t come to that,” he added.

Taking the time to make everyone feel part of the success seems to be an important part of England’s current mantra and this was on show during the trophy celebration following the Karachi Test when Stokes handed the trophy to debutant Rehan Ahmed to display front and centre as he inconspicuously stood at the back to allow his teammates to take the glory.

McCullum too seemingly supports this notion as the former New Zealand captain claimed he had done ‘bugger all’ behind the scenes and that Stokes was the real mastermind behind England’s rich vein of form.

“The skipper was absolutely magnificent right throughout the (Pakistan) series,” McCullum said.

“Not just on the field, where everyone sees the decisions he makes and the strings he pulls, but it’s his man-management and his ability to get the very best out of each member of the side, off the field, which is the most impressive part from our point of view,” he added.