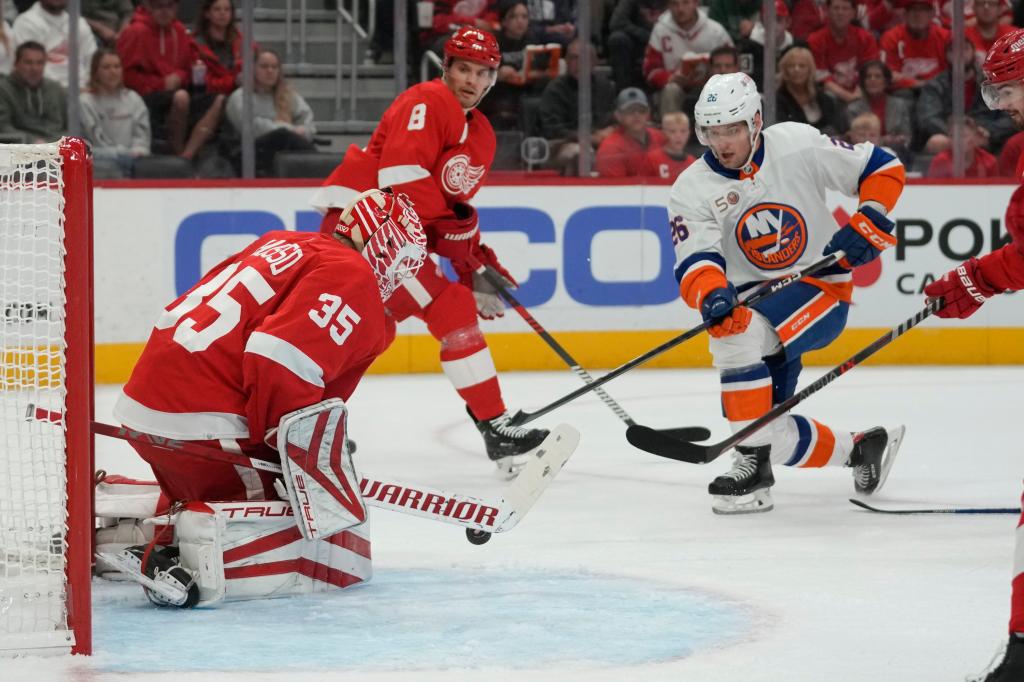 DETROIT — Ville Husso made 26 saves, and the Detroit Red Wings snapped the New York Islanders’ five-game win streak with a 3-0 victory on Saturday.

Dominik Kubalik had a goal and an assist, helping Detroit to its third win in four games. Lucas Raymond scored a power-play goal, and Pius Suter had a short-handed goal.

Husso’s shutout was his second this season and fifth of his career. He has allowed a total of two goals in his last three starts.

“The guys did a really good job today,” Husso said. “They only had like 11 shots after two periods. It made my night easy again. I just tried to keep my focus for the game and not let in any goals. Guys blocked shots and did all the little things again today.”

Semyon Varlamov made 22 saves for the Islanders, who were blanked for the first time this season. Varlamov was replaced by Ilya Sorokin with 8:13 left.

“Give them credit, they played well,” Islanders coach Lane Lambert said. “I thought they were taking away time and space but I didn’t think we played fast enough and there’s no excuse for it.”

The Red Wings had two power plays and a 13-7 advantage in shots on goal in the first period but it ended scoreless.

Detroit was awarded a 5-on-3 advantage in the second, and this time it capitalized. Kubalik set up Raymond, who was parked near the goalpost. He lifted a shot over Varlamov’s right pad for his fourth goal.

The Islanders had allowed just three power-play goals coming into the day. Raymond also scored a power-play goal off a Kubalik feed against Washington on Thursday.

“It’s getting better for sure. We have a lot of looks every power play,” Raymond said. “Kubby has found me really good there (at the side of the net), so I just try to be in the right spot.”

Adam Erne cleared the puck out of his zone, setting up Suter’s breakaway goal at 12:51 of the second. It was the first short-handed goal allowed by the Islanders this season.

“We’d had a couple of power plays, so we knew we were going to have to spend some time on the PK,” Suter said. “Getting a two-goal lead is huge and doing it short-handed just takes away all of their momentum.”

The Red Wings killed off two penalties in the first seven minutes of the third. Husso made a sliding stop against Mathew Barzal with 12 minutes left.

Kubalik scored his fifth goal with a wrist shot from the left circle with 9:47 remaining.

With four games coming up next week, Lambert said his team won’t dwell on the loss.

“You look at it just like we do a win and we see things we liked about it, because there was some things to like about it, and then we’ll see the things we have to correct and move forward,” he said. “It’s a busy week coming up. We’ve got games on Monday and Tuesday and we have to be ready for it.”