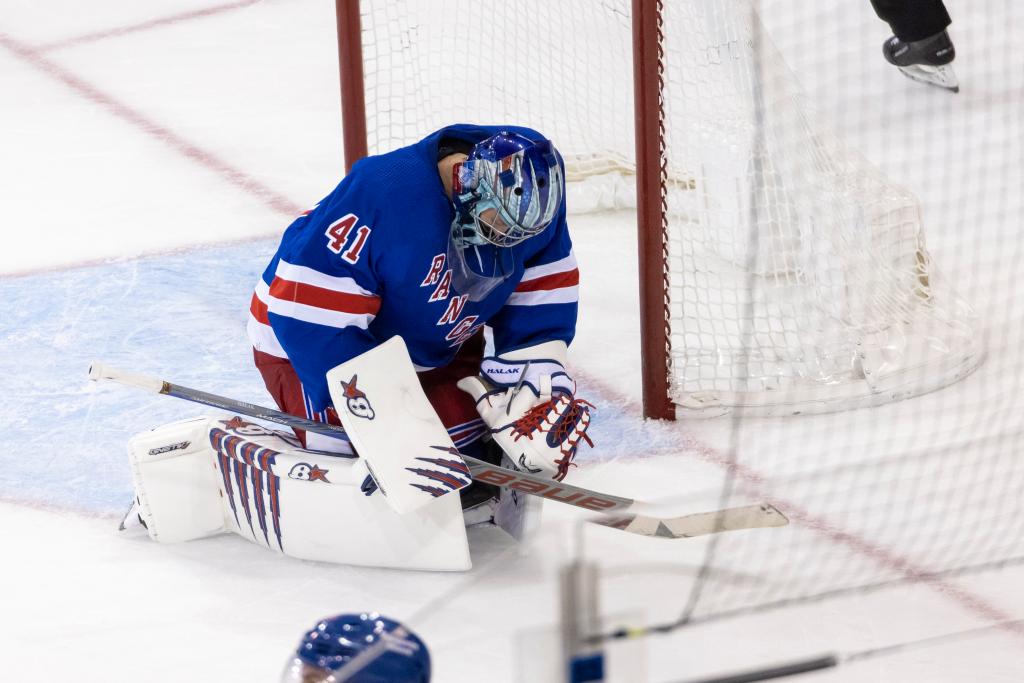 After Dominik Kubalik scored a power-play goal 2:43 into overtime, Rangers goalie Jaroslav Halak hammered his stick against the goal post multiple times until pieces of it fell to the ice.

The frustration has undoubtedly been building for Halak, who has yet to record a win in a red, white and a blue jersey after he dropped to 0-3-1 on the season despite a 33-save performance in Sunday’s 3-2 overtime loss to Detroit at Madison Square Garden.

“We didn’t get a win, so no,” Halak said when asked if he felt this was his most complete game of the season. “It’s about winning and we lost the game again. It’s nice to get one point, but we want the extra one so.”

Halak stood tall for the Rangers in an otherwise dull game, which saw the 37-year-old make eight saves in the third period to help force overtime.

During a strong first period as the Rangers built a 2-0 lead, Halak made a handful of key saves to keep Detroit off the board — particularly on the penalty kill. When Jacob Trouba was in the penalty box for holding just over five minutes in the game, the Slovakian netminder gloved down a one-timer from Detroit captain Dylan Larkin and denied Kubalik at the post.

Halak later robbed Lucas Raymond on the doorstep in what appeared to be a sure-thing goal while the Rangers were killing off Filip Chytil’s hooking penalty at 17:30 of the period.

It all fell apart for the Rangers in a lackadaisical second period, which saw Detroit bulldoze its way back into the game with two early goals. There was Matt Luff’s redirection that Halak had no way of tracking at 2:46. The Rangers’ forwards then left Zac Jones, Trouba and Halak out to dry in a poorly timed change later in the period, when he made two initial saves before Pius Suter buried the Wings’ third shot to even the score 2-2 at 8:37.

“The second period,” Halak said of where it went wrong for the Rangers. “The first and third we played good for the most part. The second we kind of gave it to them, too many odd-man rushes in the second. You’re not going to win a game like this.”

Filip Chytil, who had missed the prior six games with a suspected concussion sustained in a collision with Cole Sillinger on Oct. 23, was reinserted into his role as third-line center while defenseman Ryan Lindgren was sidelined after sat with an upper-body issue.

Lindgren left Thursday’s game with Boston after being knocked hard to the ice on a blindside, open-ice, retaliatory hit by David Pastrnak who was cited for an interference minor. The check came seconds after Lindgren had leveled the winger with a thumping hit against the boards.

Without Lindgren on Sunday, the Rangers defensive pairs were jumbled up for the first time in a long time. Libor Hajek, a healthy scratch for the previous four games and nine of the first 12, filled in for Lindgren and skated on the bottom pair alongside Braden Schneider. Adam Fox, who is usually next to Lindgren, paired up with K’Andre Miller and Trouba was linked with Jones.

Vitali Kravtsov, sidelined for the fourth straight game with the suspected head injury sustained in Dallas late last month, has been skating on his own, according to Gerard Gallant.