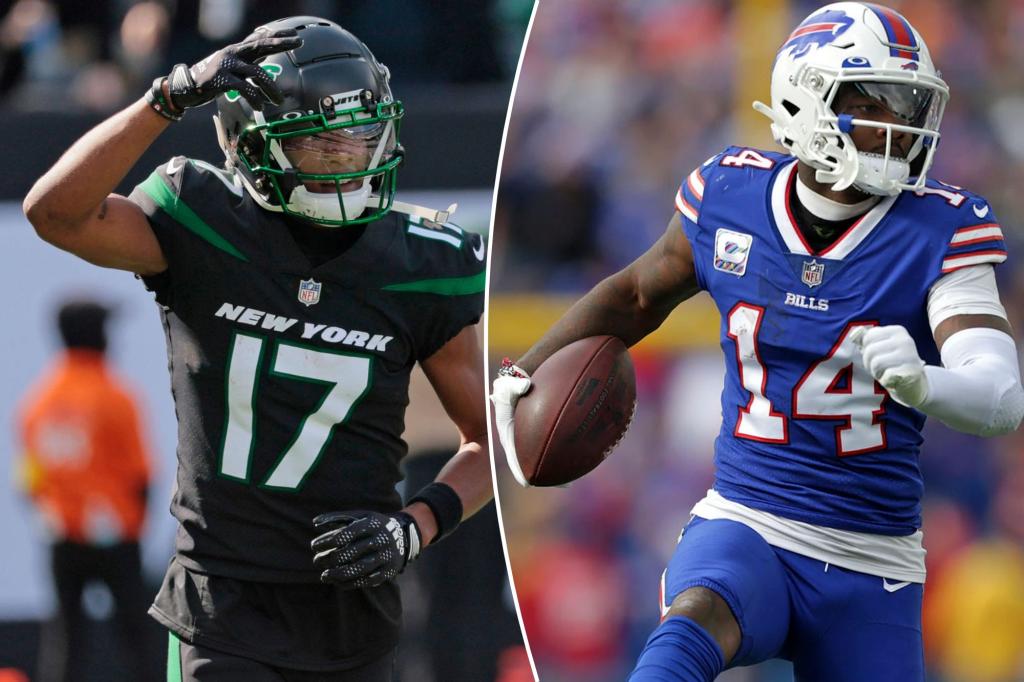 Garrett Wilson will get to share the field Sunday with a fellow wide receiver he drew comparisons to before the draft in the spring.

Bills star Stefon Diggs was a receiver many people pointed to as someone Wilson reminded them of. The Jets selected Wilson with the 10th-overall pick in April, and he has already had two 100-yard receiving games.

Wilson said he respects Diggs, but did not think they played with a similar style.

“Diggs is a great receiver, really fun to watch and plays with a lot of energy,” Wilson said. “Personally, I like to take something from everyone’s game. I feel like Diggs is a really good player, and anytime you see another good receiver out there, you want to take things, add it to your game, make yourself better. Personally, I don’t feel we’re as similar as most may think. He’s a great player. He does everything well. The more I can get myself on the level, it would be all right.”

The comparison comes from the size of the two players. Diggs is 6-foot and 191 pounds. Wilson is 6-foot and 192 pounds. The Jets can only hope Wilson will have the type of impact Diggs has had for the Bills. Diggs will enter the game Sunday with 55 catches for 764 yards and seven touchdowns.

Wilson has 34 catches for 429 yards and two touchdowns. He had six catches for 115 yards last week in the Jets’ loss to the Patriots.

Wilson often mentions Johnson when he is asked who he has modeled his game after. Johnson is an unusual choice because he is not an all-time great. Johnson played eight seasons, six for the Bills. He had three 1,000-yard receiving seasons. So why Johnson?

“It’s just me being a lover of football since I was 5 years old and wanting to learn about the game and always paying attention to everyone,” Wilson said. “I feel like growing up I watched every football game. I feel like I watched every game that ever came on for like 10 years in my life.

“Stevie Johnson was one of those dudes that always stuck out to me, always open. He wasn’t always in the best situation, though. That was just the thing that held him back or maybe he is up in those ranks. For me, as far as skill and the way he got off the ball and got into his routes, it was fun for me to watch as a young kid.”

RB James Robinson was added to the injury report on Saturday with a knee injury. He is listed as questionable for Sunday’s game. The Jaguars said Robinson had knee soreness after his last game with them before he was traded to the Jets.