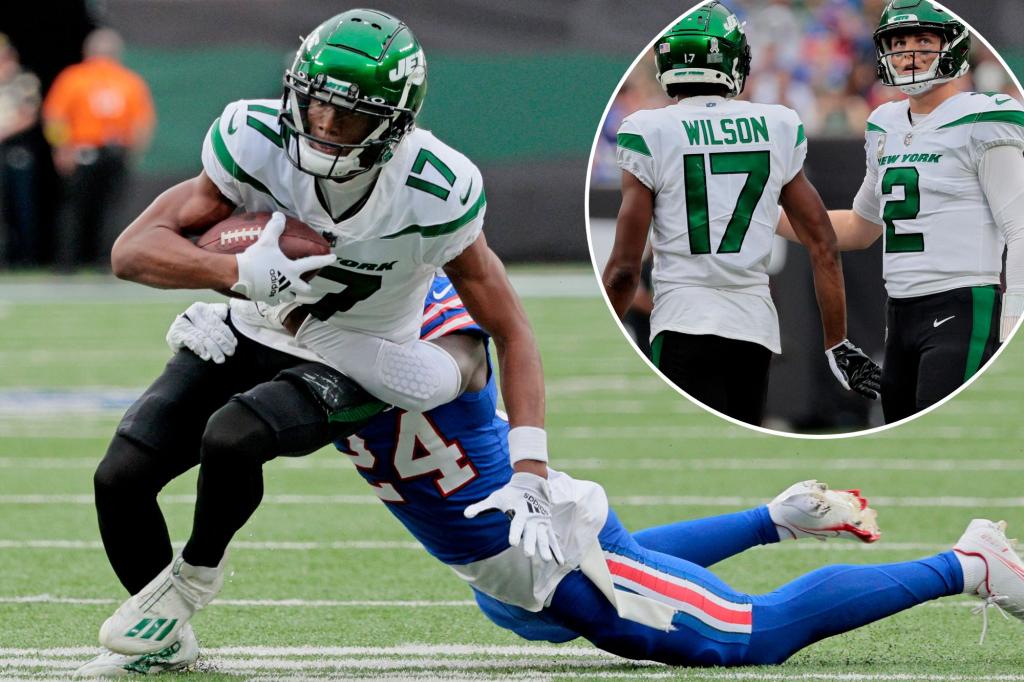 Many small businesses are closed Sundays, but the pass-completion firm of Wilson & Wilson was open all day.

Jets rookie receiver Garrett Wilson caught eight of his nine targets from quarterback Zach Wilson and accounted for nearly 60 percent of the passing offense in a 20-17 upset victory against the Bills.

“We have some funky plays that end up working out in games, and I think it’s cool to have that chemistry,” Zach said. “It’s going to keep growing because there are some looks we can still improve on. He did a great job showing up. He had some great catches.”

The sideline joke during the fourth quarter was that Garrett’s body was going to feel a “deserved sore,” according to head coach Robert Saleh, who called his receiver’s performance “gritty.”

“Them boys upstate [Bills] can hit,” Garrett said. “I had a couple plays that were bang-bang there, took some hits, but it’s going to feel a whole lot better that we won. It will be all right.”

Wilson and fellow 2022 first-round picks Sauce Gardner (seven tackles and an interception) and Jermaine Johnson (sack) unselfishly joked in the locker room that they would tell Jets fans to vote for each other for NFL Rookie of the Week and hope not to lose to a split decision. Times certainly have changed for the Jets (6-3).

“I’d be lying if I said that Buffalo, we didn’t have something for them,” Garrett said. “We wanted to prove something this week, and we did that.”

Garrett finished with 92 receiving yards, the third-highest total of his season. He made three catches for 41 yards on the Jets’ first touchdown drive, to cut into a 14-3 second-quarter deficit.

“I happened to be on the field for the routes they were giving us,” Garrett said. “Later in the game it got a little tighter.”

Garrett provided one scare when the ball slipped out of his hand with space to run as he pump-faked throwing a pass on an end-around run, ultimately diving head-first to recover his own fumble after a 7-yard gain. He has made his biggest strides this season in “seeing coverages.”

“Knowing when to give this defensive back that release versus doing too much,” Garrett said. “I’m trying to get into my route as fast as possible because the pass rush at this level is different. I’m trying to do things to help eliminate that as much as possible on my end.”

All the attention paid to Wilson allowed Denzel Mims to convert a big third down against one-on-one coverage to set up the decisive field goal in the final two minutes.

“That guy is special. I tell him every day,” Mims said of Wilson. “Every day he brings the energy, he comes out and competes. He doesn’t complain. He keeps his head down and keeps working. He’s a great dude.”