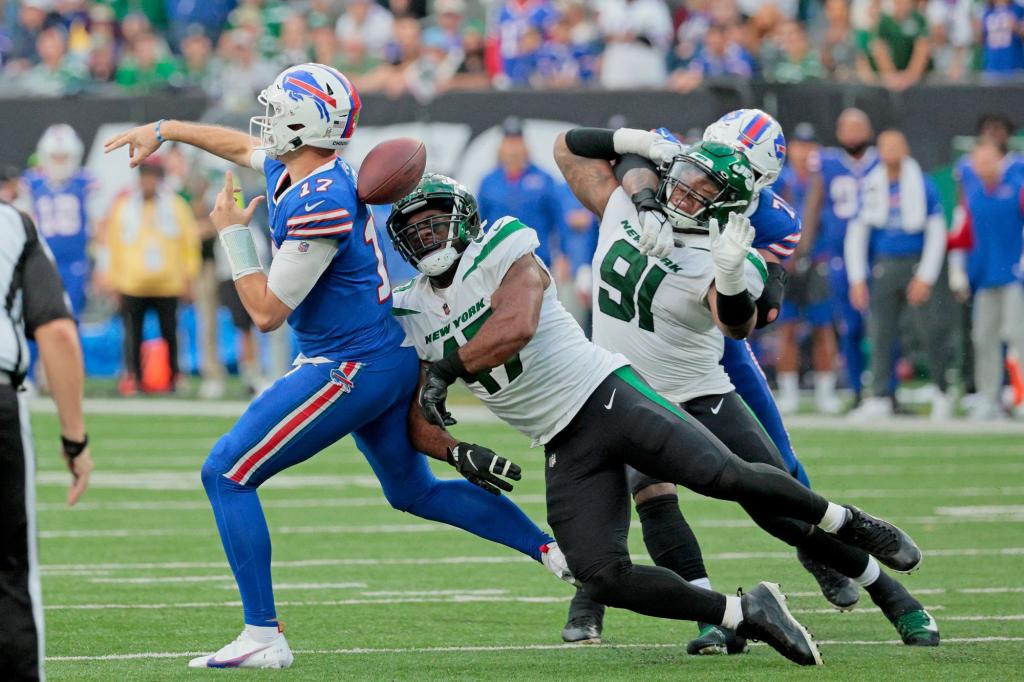 All you need to know about how far the Jets’ defense has come since last season is to look at what it did to the Super Bowl-favorite Bills in Sunday’s Week 9 meeting at MetLife Stadium and look at what occurred in Week 9 a year ago on the same field.

The Bills steamrolled the Jets 45-17 last Nov. 14, and their offense had its way with the Jets’ defense, dropped them to 2-7 at the time. Buffalo had 489 yards in total offense that day that included four rushing touchdowns.

On Sunday at an electric, sold-out MetLife Stadium, the Jets beat the Bills 20-17 and they did it with a defense that’s making a strong case as the best overall in the NFL. The Jets held the Bills prolific offense to 317 total yards, picked off quarterback Josh Allen twice and sacked him five times along the way.

The most important statistic to come out of this Week 9 result is that the victory gave the Jets a 6-3 record and has them entering their bye week a mere half-game behind the Bills for first place in the AFC East.

Laken Tomlinson, the Jets veteran starting left guard, was not with the team last season, but he knows what he sees with this team.

“I think our defense is the best in the league across the board,’’ Tomlinson told The Post. “We’ve got guys that can make plays across the defensive line and linebackers flying around and DBs, Sauce [Gardner] and D.J. [Reed], oh my God.”

Tomlinson came to the Jets after playing five seasons with San Francisco, including the 2019 season when the 49ers went to the Super Bowl on the wings of one of the best defenses in the league.

“I’m trying not to say it, because I’m superstitious, but I’ve been a part of teams like that that have gone a far way in the league and I’m having that same feeling right now,’’ Tomlinson said.

The Jets made play after big play against the Bills. The biggest was the 19-yard strip-sack by defensive end Bryce Huff that left Buffalo in a third-and-21 predicament from its own 14-yard line, down 20-17.

“Bryce has been a terror for us in practice,’’ Jets left tackle Duane Brown said. “He has a lot of great tools to rush the passer and he put them on display there. That was a big-time play and it ended the game for us.’’

Incredibly, Huff was inactive for the first three games this season because the Jets are so deep on the defensive line.

“I know it took us a couple of weeks to get him out there,” Jets head coach Robert Saleh said. “You don’t normally dress 10 D-linemen in a football game. It’s just a matter of me sitting with Joe [Douglas, the GM] and saying, ‘Screw it, we’re dressing 10,’ because we had to get him on the football field.

“He wins his one-on-ones. Being able to rush the passer is like gold. It’s a premium commodity. It is something he does at an extremely high level.’’

Huff, who’s very humble, had no complaints about his role or how long it took to get him in the game.

“Coming into the season I knew we had an extremely talented room and a bunch of new guys, so I knew what I was getting into,’’ Huff said. “My mindset the whole time was working every week to get better during practice and being supportive of my guys playing in the game, keeping everyone in high spirits.’’

Huff, who played his college ball at Memphis, called the strip-sack “tied for number one’’ as his all-time best play with a safety he caused against Ole Miss his senior year, but he added this was is “best play in the NFL for sure.’’

To date, it’s one of the best plays of the season for a Jets defense that believes it’s second to none in the league.

“As long as we go out there and we play to our potential,’’ rookie defensive lineman Jermaine Johnson said, “we know things can be pretty scary for the other side.’’