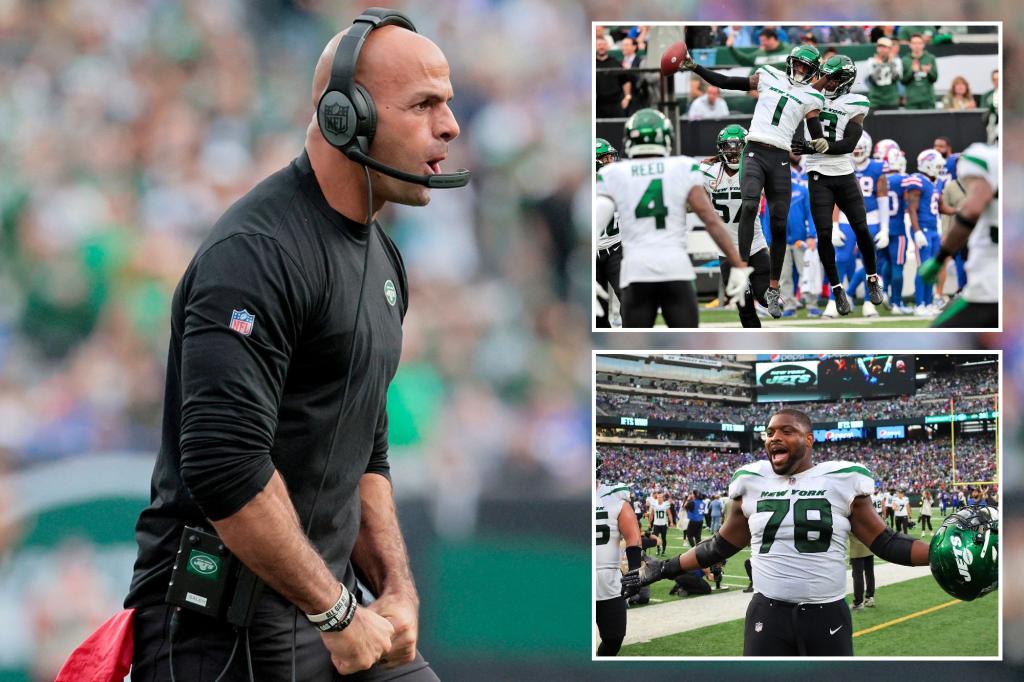 Jets taking it to Bills proves they belong once again

There was one more moment left to endure, one more play separating the Jets — and MetLife Stadium — from the most satisfying victory in almost seven long years. There were 33 seconds left, and the Jets had nudged the Bills back to their own 14-yard-line, fourth-and-21. Josh Allen was rubbing his right wrist. The stadium was roaring thunder.

Allen let one fly, down the left sidelines, where Gabe Davis was battling Sauce Gardner. Jets fans are still programmed to expect this play to end in a variety of ways, none of them especially positive. But the ball hit the turf harmlessly, and 83,135 sets of eyes immediately scanned the vicinity to spot yellow flags.

No flags. No miracle for the Bills. Instead there would be a victory formation, the final nail in this 20-17 Jets victory that, when it flashed on scoreboards in stadiums across the NFL right around 4 o’clock Sunday afternoon, had to have people asking themselves: typo?

“That wasn’t the prettiest game,” linebacker C.J. Mosley would say, “but we showed a whole bunch of heart.”

They did. They all did. At game’s end, the green-clad defenders among those 83,135 witnesses had drowned out the invading forces of Bills Mafia, and they let loose a snarl that’ll still be heard on the Jersey Turnpike come rush hour Monday. Seven years they’d all waited for a game like this, since Week 16 of 2015, that overtime win against the Patriots that allowed the Jets to dream playoff dreams for seven more days.

Seven years, six quarterbacks and three coaches later, the Jets stalked off the field and into their bye week having knocked off the NFL’s consensus team to beat, dragging a 6-3 record into the bye week with a rematch against the Pats awaiting them on the other side of it.

“We knew,” receiver Garrett Wilson said, “that we wanted to make a statement.”

“A lot of people will be surprised by this,” head coach Robert Saleh said. “But I don’t think there’s one person surprised about this in our locker room.”

Sometimes, the nobody-believes-in-us mantra can be tiresome and manipulative, but in the Jets’ case, it happens to be true. Nobody believed in the Jets at season’s start, when most figured even a huge leap forward might yield five wins if the ball bounced right.

Even when the Jets started to collect wins, the skeptics were quick to qualify them: They benefited from a one-in-a-million miracle in Cleveland. The Dolphins and Broncos played backup quarterbacks. Green Bay and Pittsburgh are clearly not nearly the equal of their pedigrees or recent histories. On and on.

This was different. This was the Bills. Were they banged up? Sure, they were. But so are the Jets. And the Bills had managed to plow through their first seven games at 6-1 and were 12-point favorites Sunday on merit. They are the presumptive favorites to come out of the AFC. They have Allen. They have all those toys, both sides of the ball.

And yet, the Jets outplayed them in every phase. The defense sacked Allen five times and picked him off twice, and it stubbornly refused to allow the Bills’ pinball-machine offense to get anything close to a rhythm. The offense was mistake free, save for one Zach Wilson strip-sack, and when the game was there to be won, they made like the ’73 Dolphins and ran the ball on play after play, 12 out of 13 plays, leading to the go-ahead field goal by Greg Zuerlein.

And the special teams had a near-perfect day, too, highlighted by a successful fake punt early in the third quarter. And with each possession, the home crowd shook off whatever negative impulses it might’ve had given years of practice and willed the rest to happen.

Nope. Not a typo.