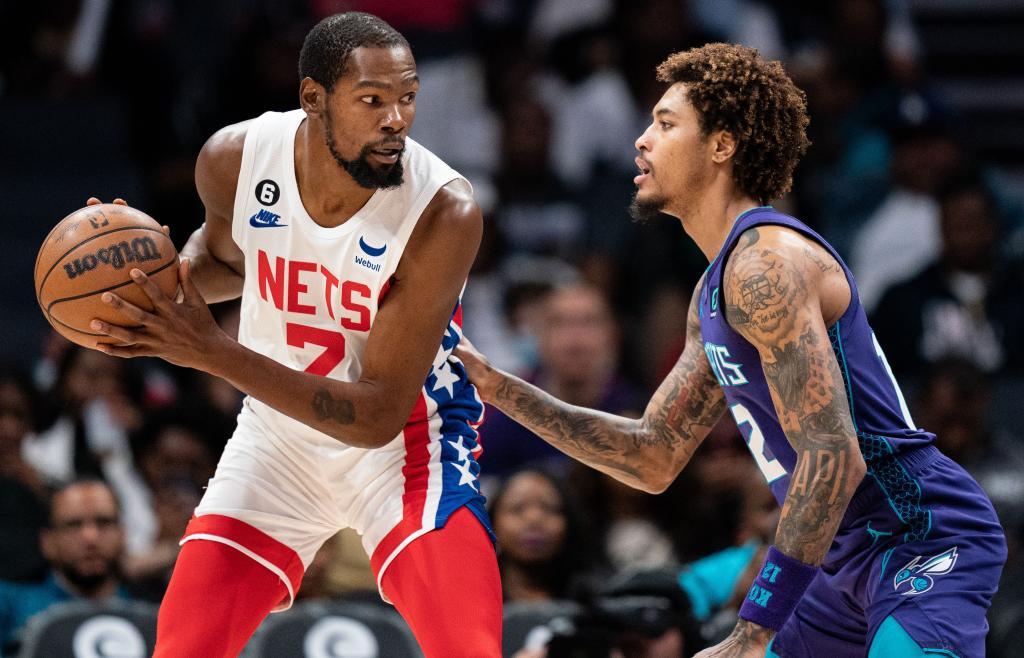 CHARLOTTE, N.C. — In a game the Nets seemed first to win, then to lose, they had the last run of the night. And the last laugh.

The Nets came from behind in the fourth quarter to pull out a 98-94 victory over the Hornets at Spectrum Center.

Trailing by 80-69 in the final period, they closed with a 27-14 run. Kevin Durant led the way, with help from Cam Thomas.

The Nets improved to 4-6, and 2-0 since suspending Kyrie Irving.

“Yeah, good challenge for us to see if we can put two games on both ends of the floor back-to-back against the team who had a tough game the other night,” interim coach Jacque Vaughn said before the game. “Both teams back-to-back, and see who responds. So looking forward to it.”

Like the Hornets, they were playing on the tail end of a back-to-back. But after cruising to a blowout victory Friday in Washington without Irving, Ben Simmons and Seth Curry, they ground out an encore performance.

The Nets defended well enough, but despite getting clean looks from 3-point range all evening, their shooting touch almost let them down late. Within striking distance, trailing just 70-69, they coughed up 10 unanswered points.

With the Nets down 76-69, the Hornets’ Nick Richards hit a momentum-shifting and-one. Nic Claxton got whistled for a technical, which Richards converted.

A Joe Harris left-corner 3-pointer pulled them within two, and Thomas — who had a second straight strong game in Irving’s absence — knotted it from the free-throw line.

But Charlotte went back ahead with 2:24 remaining.

Durant tied it at 89-all, and Yuta Watunabe drew an offensive foul on Mason Plumlee to give the Nets the ball back.

After a back-and-forth, Durant hit a 3-pointer for a 94-92 lead with 1:12 to play. Then he snatched a defensive rebound, and sank a dagger baseline jumper.

And after a Mason Plumlee reverse tip-in, the Nets held on to ensure there would be no overtime.