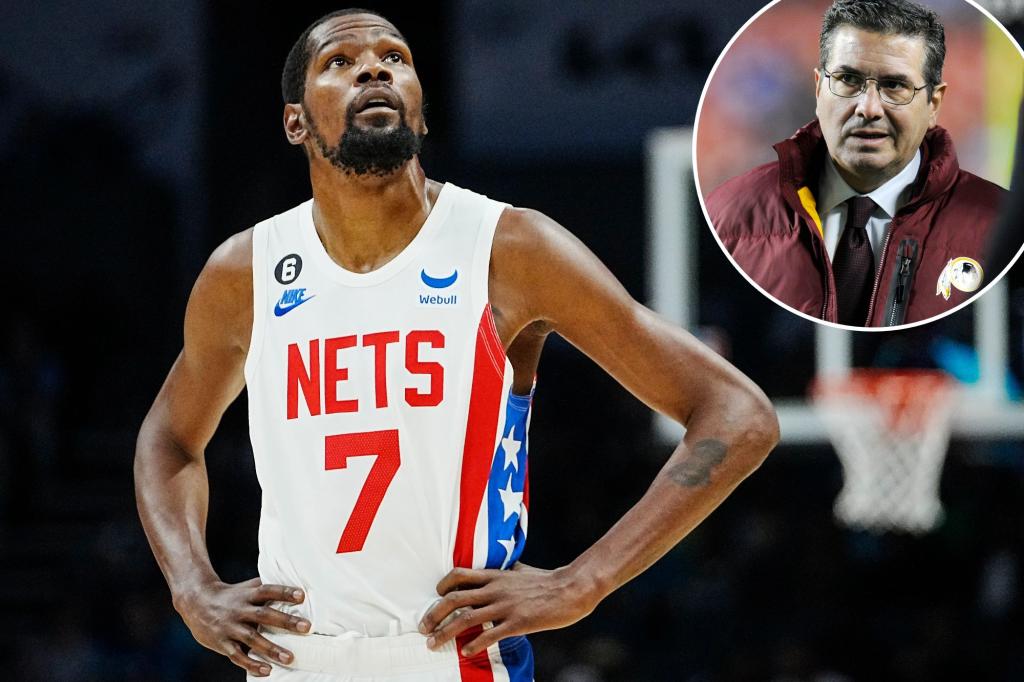 From the NBA to the NFL.

Washington D.C. native and Nets forward Kevin Durant says he is hopeful that he can be a part of the Washington Commanders’ new ownership group.

A lifelong Commanders fan, Durant has been following what’s going on with owner Dan Snyder and is waiting to see what happens with the potential sale of the team.

Earlier this week the franchise announced that Snyder and his wife, co-owner Tanya, have hired Bank of America Securities “to explore potential transactions involving the team.”

“In a perfect world, I would be a part of it,” Durant said. “I would love to do it. I would love to give a little bit of my money to be a part of the Commanders, but we’ll see. Hopefully, it’s somebody nice. I heard [Amazon CEO Jeff] Bezos and Jay-Z, but you never know.”

Bezos and Jay-Z plan to make an official bid on the team in January, The Post reported on Saturday.

Durant said he was surprised that Snyder has interest in selling.

“I mean, how long has he had it now, 20-something years?” Durant said. “He’s probably the only owner I’ve known since I’ve been alive for the Redskins/Commanders. So it’s definitely shocking to see him put them up because it’s his baby. NFL teams are precious, they’re important.”

Durant added he believes there will be a lot of bidders as the franchise is “one of the most lucrative teams in sports” and that “everybody wants to be a part of the league.”

Commanders’ wide receiver Terry McLaurin gave Durant his jersey before the Nets played the Wizards in Washington on Friday night.

“I know we’ve had some losing seasons, but it’s starting to come around for us,” Durant said. “I’m excited as a fan. I’m excited about the sale. I’m excited to see who they bring in and who they sell the team to and see how we move forward with it.”

The Commanders wouldn’t be the first team in which Durant would have part-ownership. In 2020 he bought a 5 percent stake in the Philadelphia Union of MLS with the option to add another 5 percent. He is also a minority owner of club NY/NJ Gotham FC of the National Women’s Soccer League and a co-owner of a pickleball team.

Durant hasn’t got his hopes up, however, noting that he doesn’t have as much money as other potential bidders for the Commanders.

On FOX’s NFL pregame show on Sunday, Jay Glazer reported that the team could fetch up to $7 billion and that a sale is expected to take place within the next six months.