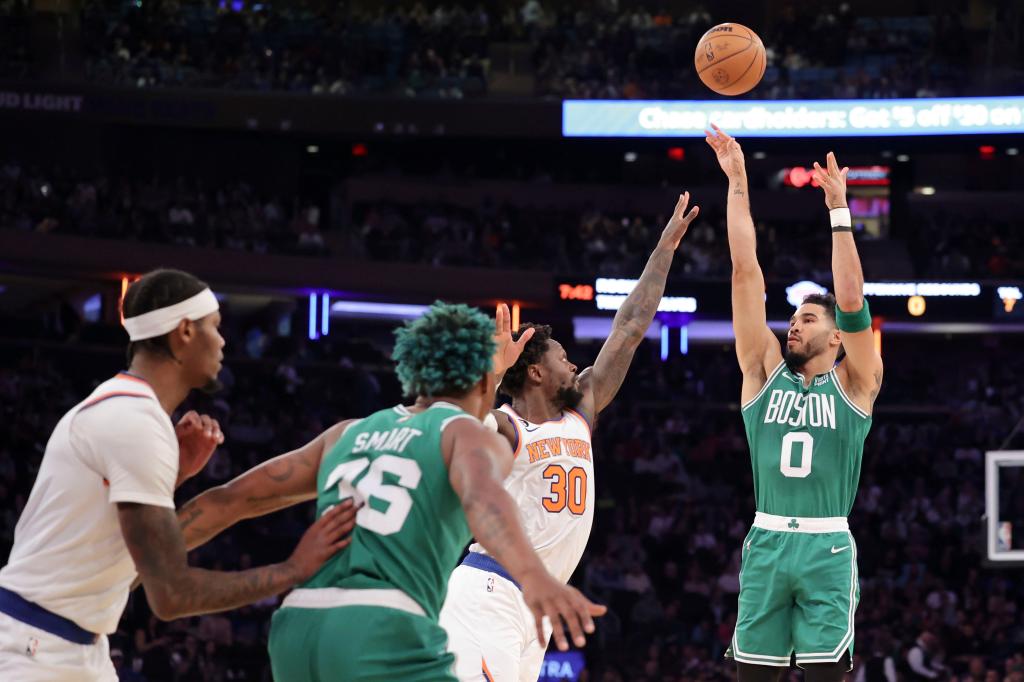 A male fan banked in a half-court heave to win a new car during the third quarter Saturday night, providing a euphoric moment for the home crowd and even earning him a chest bump from RJ Barrett and a bear hug from Julius Randle.

The Celtics’ deadly proficiency from long range all night long certainly had the opposite effect on the helpless Knicks and the stunned Garden faithful. Boston’s sharpshooters connected for a franchise-record 27 3-pointers — also setting the mark for treys allowed by the Knicks — to crush Tom Thibodeau’s team, 133-118.

Jaylen Brown had 30 points and Jayson Tatum contributed 26 — with six 3-pointers apiece — for the Celtics, who fired their way to a whopping 52.9 percent efficiency (27-for-51) from beyond the arc.

The barrage also broke the previous Knicks record for 3-pointers allowed of 26, the Bucks’ total in a game at the Garden in November 2021. The Knicks had given up 23 last Sunday in a loss to Donovan Mitchell and the Cavaliers in Cleveland.

Randle (29 points) and Barrett (27) managed season-high scoring totals, and Jalen Brunson finished with 22 points and 10 assists for the Knicks (4-5).

Isaiah Hartenstein made his first start of the season for the Knicks in place of banged-up center Mitchell Robinson (knee) and scored 10 points with a team-best 14 rebounds over 38 minutes.

Evan Fournier was out of the starting lineup for a second straight game, one night after Quentin Grimes had replaced him with the first five in a comeback win in Philadelphia. With Grimes (foot soreness) held out Saturday because it was the second night of a back-to-back, Thibodeau chose to start Cam Reddish (four points) at shooting guard, leaving Fournier with the second unit.

The Celtics, who improved to 6-3 this season under interim coach Joe Mazzulla, drained five of their first six attempts from long distance — including two by Tatum — in the first 3:34 for a quick 15-5 lead. But Reddish sparked the Knicks at the defensive end with a key steal, and they rattled off 10 points in a row — featuring two 3s by Randle — to even the score.

A pick-6 style steal and dunk by Immanuel Quickley, seven points in five minutes from Derrick Rose, rejections by Obi Toppin and third-string center Jericho Sims and a 3-pointer in the closing seconds by Fournier kept the Knicks within 32-29 through one quarter.

With big men Al Horford (rest) and Robert Williams (knee) out for the Celtics, Thibodeau again turned to the smaller lineup, with a combo of Randle and Toppin, for part of the second quarter. But Boston kept firing from long range, netted the first nine points of the session and opened a 53-39 lead on Sam Hauser’s corner trey with 7:40 left before halftime. It was his fourth long-range connection of the half.

The Knicks’ makeshift starting unit got them back in the game by intermission. Barrett buried two 3s and scored 13 points, while Randle added seven points in a 27-14 splurge to close out the half for a 67-66 Celtics advantage through 24 minutes.

Boston added to its halftime total of 13 made 3s with eight more in the third quarter, extending the lead to 101-96 entering the final period.

A traditional three-point conversion by Randle cut the Knicks’ deficit back to four, but Tatum set the Celtics’ franchise record with their 25th and 26th 3-pointers of the night for a 124-114 game with 3:34 remaining.