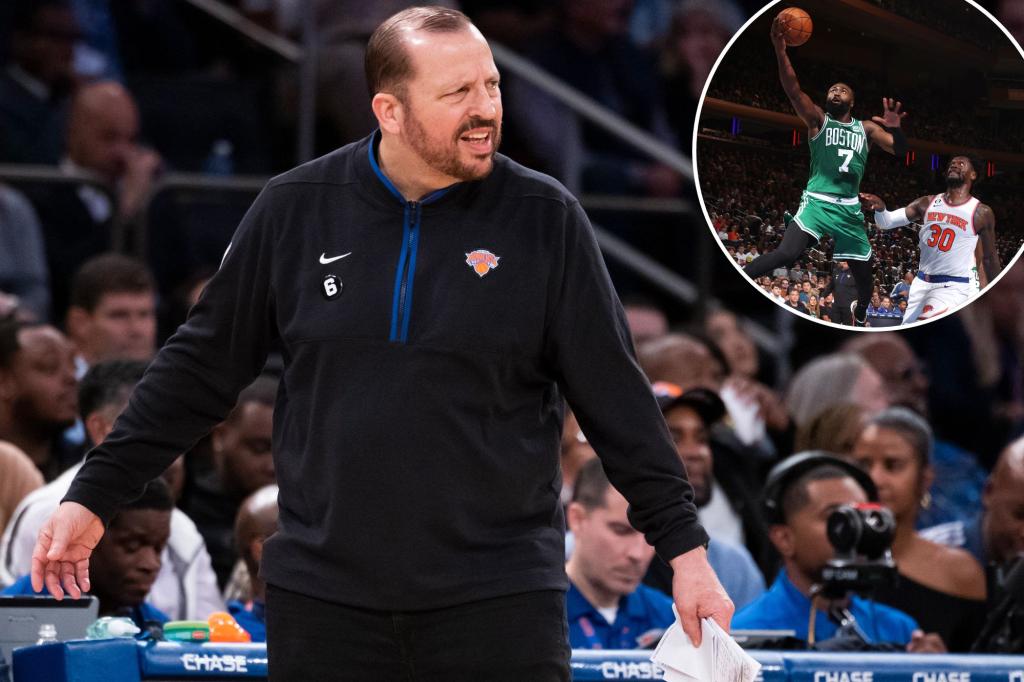 The calling card is supposed to be defense.

It is what Tom Thibodeau has hung his hat on for his entire coaching career. It is what fueled the Knicks’ impressive fourth-place Eastern Conference finish in Thibodeau’s first season with the team in 2020-21.

So far, however, it has not been the Knicks’ strength and now they will be without their No. 1 rim protector, Mitchell Robinson, for at least the next few weeks due to a sprained right knee, as the schedule remains stiff.

“Mitch is a big part of what we do,” Jalen Brunson said.

The stats tell the story. The Knicks are 17th in the league in defensive rating (112.8), a figure that is even worse if you take out the past five games — all coming against projected playoff teams (116.6, 26th in the league). Those teams have featured stars such as Giannis Antetokounmpo, Donovan Mitchell, Dejounte Murray, Jayson Tatum and Jaylen Brown who have torched the Knicks. The Knicks are allowing 115.9 points per game, which is 23rd, though part of that is their increased pace on offense.

Overall, their 3-point percentage defense isn’t terrible. They are 12th, allowing 35.5 percent. But that area has worsened in the past five games, the Knicks allowing the opposition to shoot it at a 38.7 percent clip. In Saturday’s loss to the Celtics, the Knicks allowed 27 3-pointers in 51 attempts, a franchise-worst mark and they allowed the Cavaliers to shoot 23-for-50 from long range in a recent loss.

What’s happening on and off the Garden court

Sign up for Inside the Knicks, a weekly exclusive on Sports+.

“We have scouting reports, we know what every player does,” Obi Toppin said. “Every player on our team should be able to guard 1 through 5. We work extremely hard in practice. Coach Thibs emphasizes it: Defense is going to win a lot more games than offense is. As soon as we click on the defensive side, I think we’re going to be a very dangerous team.”

Thibodeau has repeatedly pointed to his team’s strong field-goal percentage defense — 43.1 percent, the second-best mark in the league behind the Bucks — as an example that the Knicks are defending well for the most part. The problem, he has pointed out, is the inability to protect the defensive glass and limit opponents to one shot per possession. That wasn’t an issue against the Celtics — they had only eight offensive rebounds. However, in Friday’s win over the 76ers, Philadelphia had 13 offensive rebounds and the Hawks had 17 last Wednesday. The Knicks are 25th in defensive-rebounding percentage, a revealing statistic. Robinson’s injury only will make that weakness more glaring.

It doesn’t figure to get easier, either. Monday night they visit the explosive Timberwolves of Karl-Anthony Towns, Rudy Gobert and Anthony Edwards followed by the Kevin Durant-led Nets on Wednesday. After a brief reprieve against the rebuilding Pistons and Thunder at the Garden over the weekend, the Knicks have a five-game West Coast trip that includes games against the Nuggets, the defending-champion Warriors and Suns.

“I think, going forward, it’s just communication,” Brunson said. “We have the pieces, we have the intent, we have the guys that want to do the work. Now we just need that last piece.”

The Knicks listed second-year guard Quentin Grimes (sore left foot) as questionable for Monday’s game in Minnesota. After missing the first six contests of the season, Grimes played in the next two. He started on Friday night, but was held out of Saturday’s loss to the Celtics. The left foot also cost him almost the entire preseason.