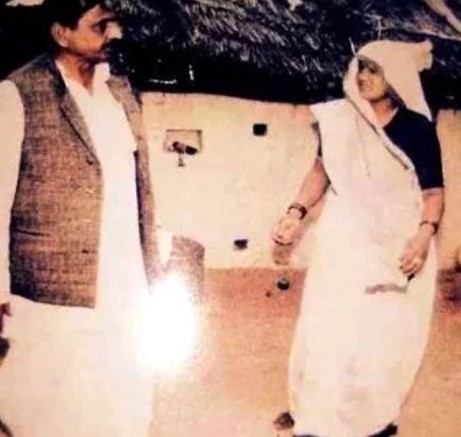 Malti Devi (1943 – 2003) was an Indian woman. She was the wife of the late Samajwadi party founder, Mulayam Singh Yadav. Her only son Akhilesh Yadav is an acclaimed Indian politician. In 2003, she died after suffering a heart attack.

Malti Devi was born in 1943 (age 60 years; at the time of death) in the village Raipur, Kanpur division, Uttar Pradesh.

In 1957, Malti Devi got married to Mulayam Singh Yadav.

At the time of marriage, Malti Devi was fourteen years old. The couple got married in 1957; however, their family members organised their marriage guana ceremony in 1962. According to some media sources, during his marriage ceremony. Mulayam Singh went on a 5 buffalo cart procession to marry Malti Devi. He travelled about 20-22 km from Saifai to Malti’s house in Raipur in Uttar Pradesh. When the marriage procession reached Malti Devi’s house, all the guests from the groom’s side were welcomed with pomp and a gold chain by the family members of Malti. In 1973, Malti Devi gave birth to Akhilesh Yadav, an Indian politician. Soon after the delivery, she went into a vegetative state due to medical complications.

On 24 May 2003, Malti Devi passed away in Village Raipur, Kanpur division, Uttar Pradesh after suffering a heart attack.