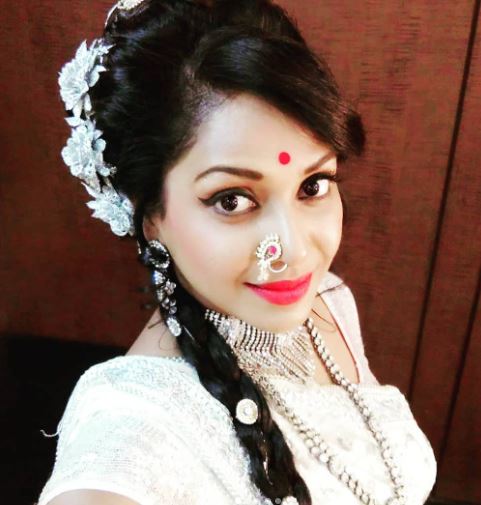 Megha Ghadge is an Indian actress and Lavani dance instructor, who works in Marathi films and TV serials. In 2022, she participated in the reality TV show Bigg Boss Marathi 4.

Megha Ghadge was born on Wednesday, 10 December 1980 (age 42 years; as of 2022) in Mumbai. Her zodiac sign is Sagittarius. She is an alumna of Mumbai University. Inclined towards dance from a young age, Megha started learning Lavani dance form while she was in school.

Megha Ghadge with her mother

Megha Ghadge with her brother

Megha Ghadge began her career as a Lavani dancer. She has been performing Lavani on stage for more than 20 years.

She also owns a folk dance school named Meghmalhar Dance Academy in Andheri, Mumbai, where she conducts Lavani and other Maharashtrian folk dance classes for students.

Megha Ghadge teaching Lavani to students at her dance academy

Megha Ghadge began her acting career in 2004 with the Marathi film Pachhadlela in which she played the role of Soundarya Jawalkar.

In 2017, she appeared as a guest in one of the episodes of season 1 of the Marathi comedy reality TV show Chala Hawa Yeu Dya aired on Zee Marathi.

She has also been featured in one of the episodes of the cooking reality TV shows Mast Majjedar Kitchen Kallakar.

In 2019, she appeared in the reality TV show Marathi Taraka. In 2022, she entered the house of Bigg Boss Marathi 4 as a contestant.

Megha Ghadge inside the house of Bigg Boss Marathi 4

Megha Ghadge has also been featured in the music videos of a few Marathi songs including Kata kirr by Adarsh Shinde.