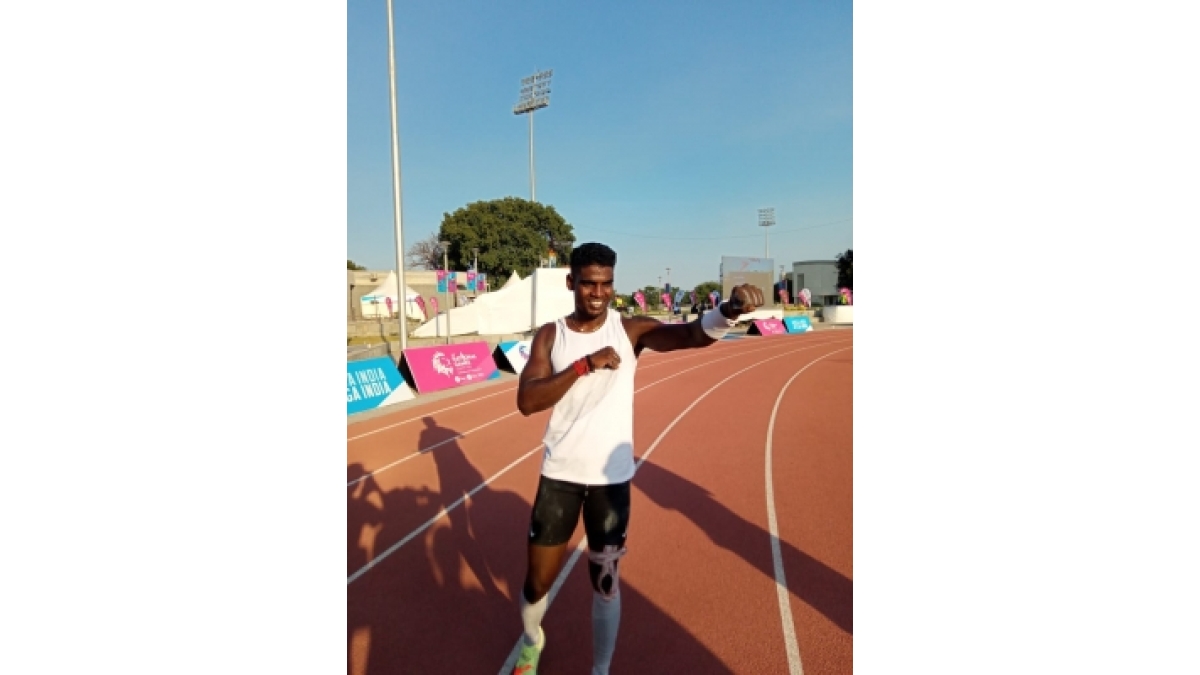 One more Services man, though representing Arunachal Pradesh, emerged as the day’s other star, setting a new National Record in Men’s 96kg weightlifting, with Sambo Lapung lifting 198kg to shatter the clean and jerk mark.

Egged by a goodly crowd at the IIT Gandhinagar, Siva Subramaniam broke the National Games record, set at 5.10 by Vijay Pal Singh back in 1987, by clearing 5.11m. He then soared over 5.21m and asked for the bar at 5.31, with an eye on the record. He failed on the first try but wound himself up to clean it the next time.

Breaststroke swimming star SP Likhit also played his part for Services in earning two gold at the Sardar Patel Aquatics Complex in Rajkot. He first won the 200m breaststroke gold and then swam a leg in the Services 4x100m Medley Relay triumph.

Hrutika Shriram (Maharashtra) claimed her ninth gold medal in the National Games, her first in this edition when she expectedly won the women’s 3m springboard diving contest. Notching up a tally of 179.15 points, she promptly dedicated the gold to her coach-husband and two-year-old son.

Kirpal Singh (Punjab) stood between the discus throw gold and Services. His 59.32m was a new National Games Record, breaking a 25-year-old mark set at 58.56 by Shakti Singh. Gagandeep Singh and Prashant Malik (both Services) took the lesser medals, according to a release by the organising committee.

There were no such stumbles for the Services’ rowing team in the course laid on the Sabarmati, their men taking home all seven gold. They added three on Monday through the formidable Arjun Lal Jat and Arvind Singh (Lightweight Double Sculls), the Quadruple Sculls, and Coxed Eight teams.

The women’s events saw Madhya Pradesh’s Vindhya Sankath and Rukmani both climb the podium twice on Monday with victories in Lightweight Double Sculls and Quadruple Sculls. Their teammate Khushpreet Kaur also picked up her second gold in the Quads, having won the Single Sculls on Sunday.

Punjab’s Sift Kaur Kamra bagged the women’s 50m rifle 3-positions crown beating Odisha’s Shriyanka Sarangi. Sift took a 6-0 lead. But Shriyanka fought back with some high 10s to make it 15-15 in a race to 16 points. Both shot a lowly 9.8 in the 16th series before Sift claimed gold with a 10.1 against Shriyanka’s 9.8.

Uttar Pradesh men and Telangana women became the inaugural winners of the 3×3 basketball gold medals after scoring victories over Tamil Nadu 21-18 and Kerala 17-13 respectively in the finals in Bhavnagar.

Telangana’s joy doubled when their badminton stars claimed the Mixed Team gold with a 3-0 victory over Kerala in Surat.

The husband-wife pair of Sumeet Reddy and Sikki Reddy put the team in the lead before Sai Praneeth rallied from a game deficit to beat the redoubtable H.S Prannoy. Samia Farooqi made quick work of Gowrikrishna to seal gold.

In the men’s Recurve Archery semifinals, in a big battle, Atanu Das (West Bengal) blanked Tarundeep Rai (Services) 6-0. Tarundeep had beaten Jharkhand’s Jayanta Talukdar, who had topped the qualification, in a match that could have drained him emotionally. Atanu Das will meet Gurucharan Besra (Services) in the final.

Meanwhile, in women’s hockey, Haryana captain Rani Rampal scored a hat-trick in a 4-0 defeat of Odisha for their second win in a Group A match at the Major Dhyan Chand Stadium in Rajkot. They are assured of a place in the last four. Uttar Pradesh bounced back from their opening loss to score a 6-0 win over hosts Gujarat.

In Group B, Karnataka came from behind to tie with Jharkhand 3-3 while Punjab prevailed over Madhya Pradesh by the odd goal in three for their second win.

In a Men’s Pool A Match, Haryana trounced West Bengal 7-0 with Abhishek recording a hat-trick.