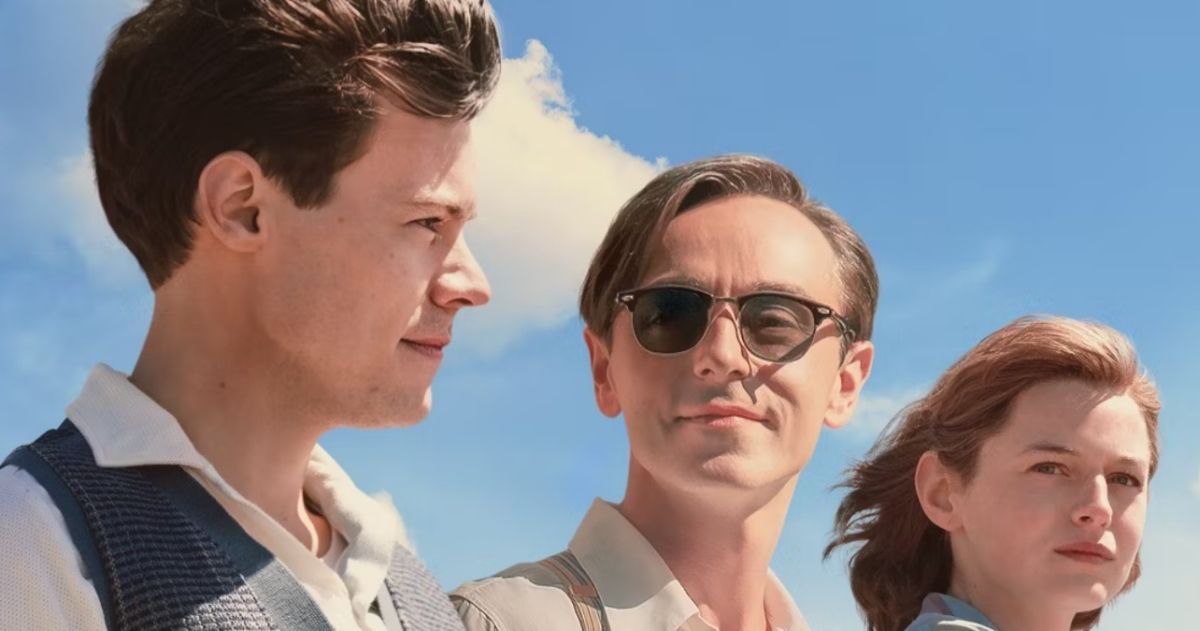 Harry Styles has been making quite an impact on Hollywood recently with high profile appearances in last year’s Marvel movie Eternals, and as one of the leads in the Olivia Wilde directed Don’t Worry Darling, which released last month. Now he will return to cinemas on October 23 in My Policeman, and a new poster has been released by Prime Video confirming the movie’s subsequent release on streaming on November 4.

My Policeman is based on the novel by Bethan Roberts, and along with Styles stars Emma Corrin, Gina McKee, Linus Roache, David Dawson and Rupert Everett. According to Prime Video’s logline, My Policeman is “a beautifully crafted story of forbidden love and changing social conventions, My Policeman follows three young people—policeman Tom (Styles), teacher Marion (Corrin), and museum curator Patrick (Dawson)—as they embark on an emotional journey in 1950s Britain. Flashing forward to the 1990s, Tom (Roache), Marion (McKee), and Patrick (Everett) are still reeling with longing and regret, but now they have one last chance to repair the damage of the past.”

Harry Styles made his acting debut in the 2017 movie Dunkirk, and after making his post-credit appearance as Eros/Starfox in Eternals, his lead roles in Don’t Worry Darling and My Policeman have delivered a double-header of movies for his many fans. While Don’t Worry Darling gained a lot of mixed to negative reviews, My Policeman is expected to see Styles shine in a performance that is already gaining attention as a potential award-winner.

My Policeman is directed by Michael Grandage, who has said he was drawn to the story that deals with LGBTQ issues, but when he began his search for a the actors he needed to make up his trio of leads, Harry Styles did not figure in the possible candidates, and it was only when his team mentioned that the singer had read the script and wanted to be part of the movie that things started to come together.

Despite Styles having limited experience as an actor, Grandage told Vanity Fair that Styles arrived for their first meeting as a “fully formed actor.” He said:

“He had read the script so many times that he knew every single beat of it at that meeting. I found that incredibly impressive. He knew other people’s lines; he knew all of his lines. He knew why he wanted to talk about it, why one scene worked this way and another worked another way.”

Grandage went on to comment that Styles’ lack of experience in the movie industry was actually beneficial for his role in My Policeman, because like some other great actors in their younger years, he only know how to bring himself to the role. Grandage continued:

“Because he hasn’t done much, he hasn’t developed the ability to work out tricks or even lie. He can only do it truthfully and as he knows it. They just bring themselves to the role, and it seems to be very uncomplicated in the way they achieve it and Harry had that.”

My Policeman will receive a special theatrical release in the U.S. and U.K. on October 21, and will stream worldwide on Prime Video from November 4.