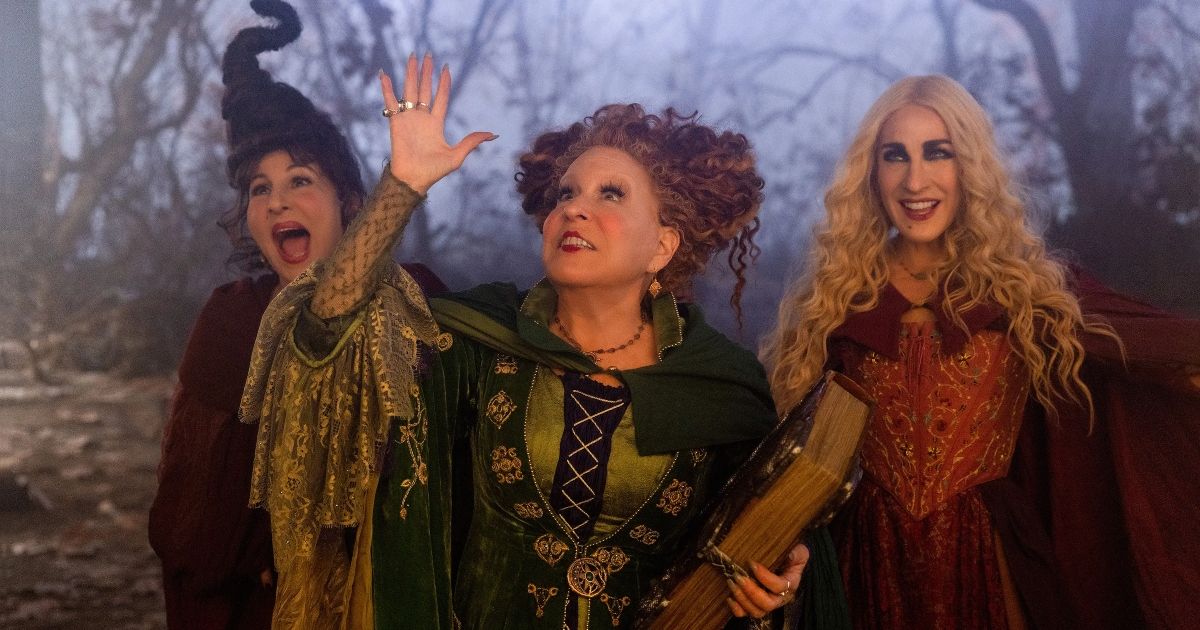 After almost three decades, the witches are back. On September 30, Hocus Pocus 2, a film that serves both as a sequel and a prequel to the well-known and beloved Hocus Pocus, was released on Disney+. Many years have gone by since 1993, the last time the Sanderson Sisters were brought back to life to commit some misdeeds. But now, in 2022, two best friends mistakenly drag them back to Salem on Halloween night. It’s up to them and their allies to get rid of the witches for good to prevent the evil trio from fulfilling their word and taking revenge on the city.

It’s no wonder that the sequel to this family-friendly horror film took so long to happen: upon its release in 1993, it was a total box-office flop. That probably had a lot to do with it being released in July, so that it wouldn’t compete with the other Halloween movie that premiered that October, The Nightmare Before Christmas. But over the years, Hocus Pocus steadily grew in popularity, and by the 2010s, it was an all-time classic for the Halloween season. Since Hocus Pocus 2 was confirmed, expectations rose as the stars of the original film were expected to reprise their roles. Yet, this second movie also featured several new characters. Let’s take a look at some of the most important roles played by the cast of Hocus Pocus 2.

Bette Midler‘s career is truly remarkable: she performs on stage, on television and in movies, sings, does comedy, and even produces. She has won many awards and performed in productions of every genre. Among her best-known films are Divine Madness, Ruthless People, and For the Boys. Still, Winnie Sanderson is not her only role in the children’s genre: Midler has also voiced Kitty Galore in Cats & Dogs: The Revenge of Kitty Galore and Grandmama in the 2019 animated film The Addams Family and its sequel.

In Hocus Pocus, Kathy Najimy is Mary Sanderson, the witch responsible for locating children through her keen sense of smell. This actress and activist’s career stretches back a long way, with roles in hits such as Sister Act, The Wedding Planner, Single All the Way and Descendants. Like Midler, Najimy has also lent her voice to several animated characters: Mary in WALL-E, The Minister of Summer in Tinkerbell, and she even made a guest appearance in Hey Arnold! as Madame Blanche.

Sarah Jessica Parker is Sarah Sanderson in Hocus Pocus and its sequel, but arguably her most iconic character, and the one that made her world-famous, is writer Carrie Bradshaw, star of the Sex and the City series. The show and its women leads were so popular that after the series’ finale in 2004, two feature films were produced, and eventually the series And Just Like That launched in 2021. Parker also appeared in other film and TV productions, such as the movies Did You Hear About the Morgans? and New Year’s Eve. As well, she starred in the HBO series Divorce as Frances Dufresne.

Whitney Peak is Becca, the aspiring sorceress who mistakenly summons the witches on her 16th birthday. This Ugandan-Canadian actress boasts a fairly young career: she made her debut in the 2017 TV film Campfire Kiss. In the last few years, however, she has been involved in several popular productions, mostly for teenage audiences. Her most notable characters have been Zoya Lott in the 2021 reboot of Gossip Girl, and Judith Blackwood in Chilling Adventures of Sabrina.

In Hocus Pocus 2, Belissa Escobedo is Izzy, Becca’s best friend. While this actress has started in the industry quite recently, her future looks very promising: per Variety, Escobedo is now confirmed as part of the cast of the superhero film Blue Beetle, which is due in 2023. She is set to play Milagros Reyes, the main character’s sister. But this film and Hocus Pocus 2 are not the only productions in which she appeared; she also made cameos in the shows American Horror Stories, Don’t Look Deeper, and The Baker and the Beauty.

Lilia Buckingham is Cassie Traske, the Mayor’s daughter and Becca and Izzy’s estranged friend. This actress and internet celebrity has been involved in many productions, but she is best known for her role as Autumn Miller in the web series Chicken Girls, Total Eclipse, Dirt, and Zoe Valentine. Also, Buckingham had a small role in the episode “Open House of Horrors” of Modern Family and starred in several short films and music videos.

Sam Richardson is Gilbert, the man responsible for the resurrection of the Sanderson Sisters. The career of this actor, produce,r and writer is closely tied to the comedy world: he co-created the series Detroiters and has been involved in a number of comedy shows and sitcoms, such as The Office and I Think You Should Leave with Tim Robinson. Richardson also starred in the political comedy series Veep as Richard Splett, for which he was nominated alongside the cast at the Screen Actors Guild Awards. Sam was also featured in the Netflix movie Senior Year, where he played Seth, the main character’s love interest.

Doug Jones is one of the industry’s most unique performers, known for his portrayal of mythical creatures and monsters, some of the most iconic in cinema. Among his most notable films are Pan’s Labyrinth, The Shape of Water, Crimson Peak, and Hellboy. In Hocus Pocus, this actor and mime artist stars as Billy Butcherson, a zombie condemned by Winifred after he cheated on her with her sister Sarah. But in the sequel it is revealed that, truthfully, the witch’s feelings for the young man were never reciprocated.

Tony Hale is Jefry Traske, the Sanderson Sisters’ greatest enemy. While the actor and comedian has starred in notable films and TV series, such as Arrested Development, Veep, and Love, Simon, his most well-known part is probably that of Forky in Toy Story 4. But that’s not the only kids’ movie he’s worked on: he also lent his voice to The Angry Birds Movie and its sequel, as well as Clifford the Big Red Dog, among other films.

Hannah Waddingham‘s character is extremely relevant to the story, as she is the witch responsible for empowering the Sanderson Sisters into becoming the most powerful coven on earth, as well as giving them the spell book. Waddingham boasts a 20-year-long career and has worked mostly on TV and stage productions, appearing in very popular projects, such as Game of Thrones and Sex Education. She also plays Rebecca Welton in the TV series Ted Lasso.