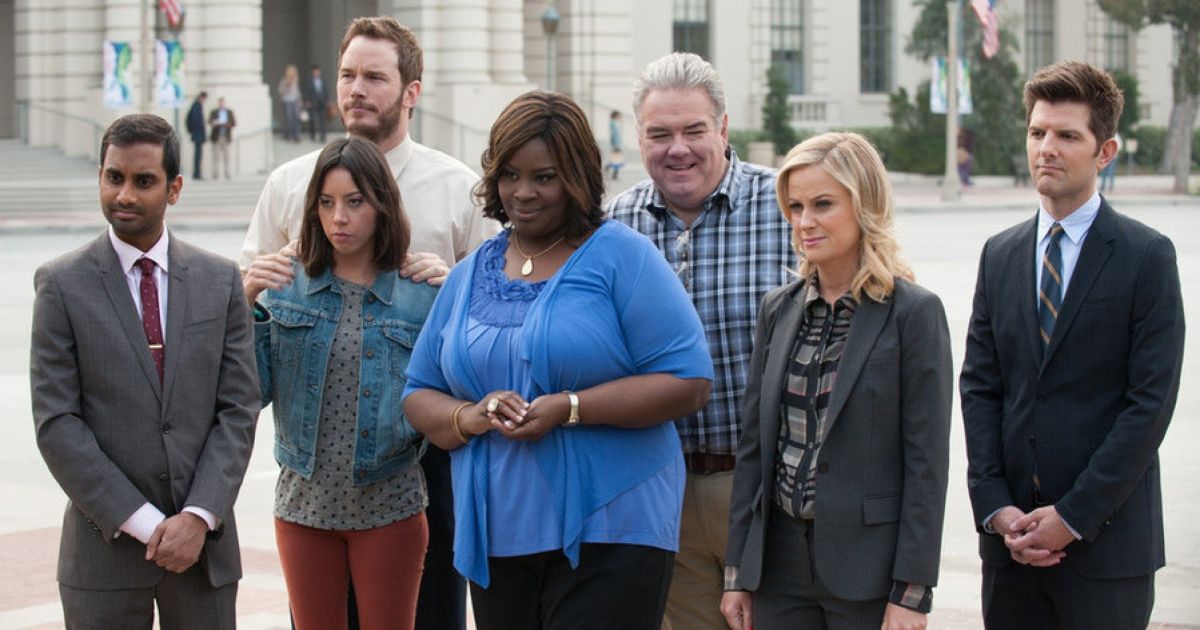 Often compared to The Office, political-comedy Parks and Recreation had the same documentary type of filming, but it often strayed from what The Office was doing. While The Office explained that they’re filming a documentary about the paper business, it was never outwardly expressed as to why the Parks and Rec crew were being filmed, and it added to the humor of it all. The show has over seven seasons and an abundance of characters that are all hilarious in their own ways, as well as great cold opens before the episode really began. The jokes were funny without being offensive, and audiences could relate to what the characters were going through; the show taking turns that one might not expect since it was mostly a comedy. With several great episodes that are memorable, here’s a list of the funniest, ranked.

With a special guest appearance by comedian and actor Andy Samberg, this episode had to make the list. The plot revolves around Jerry, as he comes to the office in a sling; his coworkers are concerned, so he makes up a lie and tells the parks department that he was mugged while walking through the park. Leslie, a defender of the park and a somewhat friend to Jerry, demands that the park have better safety standards, as well as her staff be nicer to Jerry since he was injured. There are plenty of belly-laughing moments in this episode, such as Jerry mispronouncing “trout”, splitting his pants and farting, as well as Samberg’s character talking so loud that he’s shouting. When it’s revealed that Jerry hurt himself by falling into the duck pond for his breakfast burrito, the short-lived halt on teasing is back in full swing.

Related: Parks and Recreation: How Each Character Persevered After Failure

Throughout the entire series of Parks and Rec, it’s clear that women aren’t nearly as respected as the men who work for the government in Pawnee. In this episode, Leslie invites herself to Ron’s annual men’s hunting trip, wanting to get in on the “boys club” and be involved with something that Ron seems to cherish. While on the trip, Ron is accidentally shot, as well as Donna’s Mercedes, eliciting a hilarious moment where she sprints at Leslie and tackles her down. One of the funnier moments of this episode is when a ranger comes up to the camp to investigate what has happened, proving to be misogynistic as he questions Leslie and blames what happened on it being her time of the month. Leslie plays into it, listing ridiculous reasons as to why she “shot Ron”, all due to womanly problems.

ScreenRant states that this episode, “The Fight”, is one of the best in the entire series because of how funny it is, packed with hilarious moments in under thirty minutes. When Tom invites everyone from the department to his lounge, Snake Hole, things get incredibly messy. Tom supplies his new drink, Snake Juice, to his colleagues, and everyone gets hammered, having their own personal moments with the camera as they fade from the alcohol. Donna is the designated driver in this episode and describes the drink as rat poison, inebriating everyone from acting properly. One of the funniest moments is when Andy (Chris Pratt) makes up a song and sings it to the camera, somehow slurring the words, “Farts and poop and love and stuff… macaroni salad,” and having it sound kind of good.

Leslie’s campaign is in need of help in the middle of season four, so she enlists her closest friends to ensure that the rest of the trail runs smoothly. An event that’s supposed to win her more supporters is somewhat sabotaged as it’s held on an ice rink, and someone (most likely Jerry) didn’t purchase the right sized carpet to walk across the slippery floor. As the group makes their way, sliding around and falling, Gloria Estefan’s “Get On Your Feet” plays over and over again, blasting through the ice rink as Leslie struggles to climb onto the platform that conveniently doesn’t have stairs leading up to it. Meanwhile, Chris (Rob Lowe) discovers that Ben is severely depressed and has been making a little clay version of himself, as well as a five-second video that he’s spent days on.

Related: Parks and Recreation: Where the Cast is Today

Everyone picks on Jerry, especially when it’s revealed that he has several different names, Gerry/Larry/Terry. But in this episode things get serious when something incredibly funny happens to him. It’s Halloween and the Parks Department is having a party. Ann and Leslie are discussing Leslie’s future with Ben when they decide to scare Tom, who’s currently in the bathroom. They both jump out at him, but instead of Tom, it’s Jerry, all of them laughing before Jerry drops a bomb of a fart. It quickly becomes concerning, however, when he continues to pass gas and holds his chest, with Ann realizing that he’s having a heart attack. Some of the funniest dialogue from this episode comes from Tom, as he exits the bathroom and very loudly asks if a dinosaur just farted, not knowing that Jerry was having a heart attack… or as Tom later calls it, a fart attack.

In Pawnee, Li’l Sebastian is a natural treasure. He’s a miniature horse, not to be confused with a pony, and Ron states that he has an honorary degree from Notre Dame, furthering the lore about this horse. He’s the town mascot and is beloved by many, except for Ben, who doesn’t understand the hype. So, when Li’l Sebastian suddenly dies, everyone grieves (besides Ben). Li’l Sebastian was so big that Entertainment Weekly stated that he crossed over into NBC’s The Good Place, appearing in an episode as himself. A massive memorial is held for the miniature horse and Andy performs the iconic song, “5,000 Candles In the Wind”.

When Leslie falls into the hands of a wide-spread flu that’s going around Pawnee, characters start to drop like flies around them. Leslie is the first to go, then April, who finds joy in getting to harass Ann; and finally Chris, who’s mortified at the thought of being ill. Chris is the star of this episode, as he goes through a physical breakdown of his body; delirious, dehydrated, and incapable of holding in his bowels. One of the best moments in the episode is when he shakily looks at himself in the mirror, pale and sweating, and says, “Stop… pooping.” Tom and Ben step up and help Leslie with the presentation she was set to give in order to gain more support for the festival. But in the end, it all worked out and audiences get to watch as Ben and Leslie’s romance starts to form.