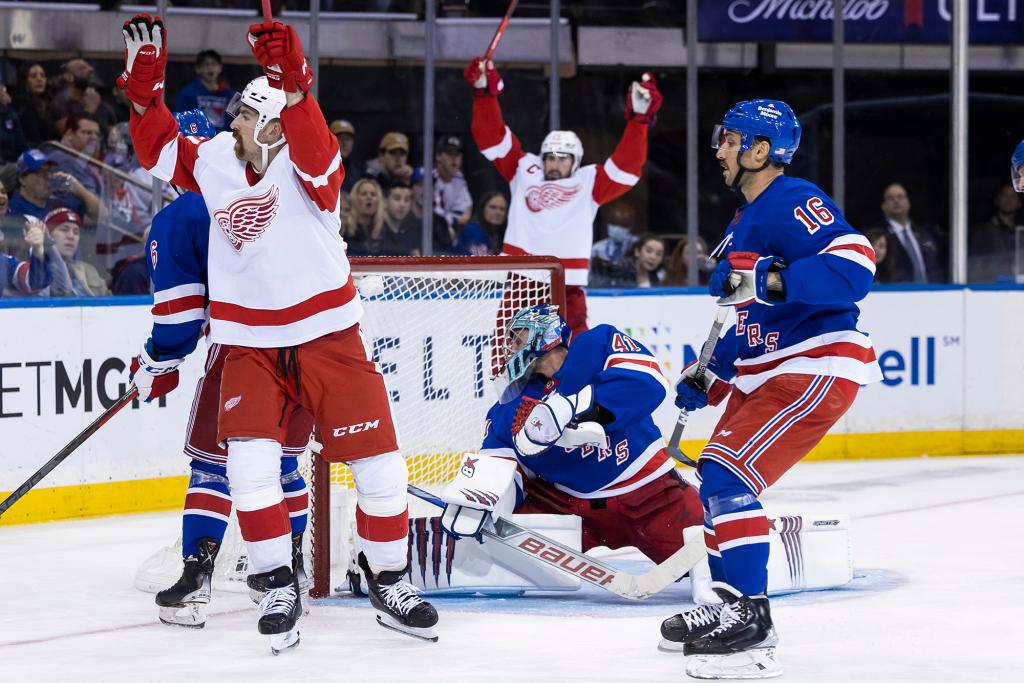 Coming away with at least a point in this 3-2 overtime loss to the Red Wings should be no consolation prize for the Rangers.

The significant drop-off in energy from the first period to the second period, and the carryover into the final frame, allowed for Detroit to force overtime, where Dominik Kubalik scored 2:43 into the extra period while on the power play to hand the Rangers their second straight loss Sunday night at Madison Square Garden.

The Rangers quickly lost their grip on the game early in the second period, when they lost their 2-0 lead in the first 10 minutes. Detroit started playing with energy and the Rangers didn’t do much to counter it, which allowed for the visitors to push their way right back into the contest.

As the home team went from being first on pucks to somewhat lagging behind the play, the game seemed to drag for the Rangers.

Less than three minutes into the middle frame, Red Wings forward Matt Luff managed to get behind Braden Schneider and put a stick on a hard shot from Ben Chiarot to deflect the puck past Rangers goalie Jaroslav Halak.

A slow and poorly executed change by Rangers forwards later in the second period led to the Red Wings pouring on three straight shots, the last of which from Pius Suter finally beating Halak to tie the game at two-all at 8:37.

As a result, Rangers coach Gerard Gallant opted to turn his lineup — which was already without top-four defenseman Ryan Lindgren (upper-body injury) — upside down to start the third. In bumping Artemi Panarin up to the first line with Mika Zibanejad and Kaapo Kakko, Vincent Trocheck centered the second unit between usual bottom-sixers Jimmy Vesey and Sammy Blais. Alexis Lafreniere skated on the left wing of the third line with Filip Chytil and Barclay Goodrow, while Chris Kreider was demoted to the fourth line with Ryan Carpenter and Julien Gauthier.

Additionally, Zac Jones took just one shift in the third period in an apparent benching.

The Rangers can seemingly have the puck on a string against some teams. Detroit happens to be one of them, but that didn’t last past the first period. The puck always seems to end up back on their sticks for prolonged periods of possession in the offensive zone, as was the case for much of the first period as the Blueshirts built a 2-0 lead.

Kakko opened the scoring at 9:14 of the opening frame, picking up a loose puck in front of the Red Wings’ net and firing a pinpointed wrist shot right over the glove of Detroit netminder Alex Nedeljkovic.

When defenseman Chiarot was called for interference on Blais later in the period, the Rangers’ top power-play unit was clicking especially well. As much as the Red Wings looked prepared for how the Blueshirts work the zone with the man-advantage, Panarin’s no-look setup of Zibanejad’s blazing one-timer at 16:56 looked like it could fool anyone.