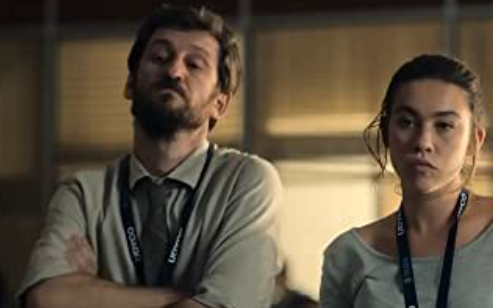 The Spanish-Brazilian crime drama series Santo will be available on Netflix on September 16, 2022. Carlos López makes the show, and Vicente Amorim is in charge of the direction.

It is the first Spanish movie that was shot in both Spain and Brazil. Nostromo Pictures made it. There are 6 episodes in total, and each one lasts between 43 and 50 minutes.

It’s a thriller show with occult elements that sometimes feel like horror. It tells the story of Santo, who is the most wanted drug dealer in the world, but whose face has never been seen. Cardona and Millán, two police officers who go after him, don’t agree with each other at all at first. But if they want to solve the case and stay alive, they will have to learn to work together and understand each other.

At the beginning of the series, there is a note saying that the police have been looking for a drug lord who also does bloodthirsty rituals for years, but no one knows who that person or the cult leader is. And the episode starts off with a violent scene: two masked bikers shoot a man in a car. They then take his son from the back seat and set fire to the car.

Here, we meet Millán, our first main lead officer. He was related to the person who was burned to ashes. But the person was a drug dealer, which shows that Millán is not a law-abiding police inspector like most. Instead, he is a crooked one. At the same time, the headless body of a child with no brain is found in the sea in Salvador, Brazil.

It is said to be a typical sign of Santo’s work, which pushes federal officer Ernesto Cardona to join “Santo’s” gang. The fact that this bad guy has a lot of power makes this mission very hard. Knowing that he might have him by his side, but he won’t know who, gives him an innate fear that danger is always present.

But the secret mission goes wrong because his cover is blown. Months later, we find Cardona lying almost dead in an abandoned factory in Spain. His eyelids are cut, and he has no idea what happened to him. The last time he was seen, he was with Barbara, who was said to be the lover of an unseen crime boss. This makes it even harder to guess what might have happened to them.

The series is able to keep up the mystery about the crime boss who hasn’t been seen right up until the very end. The bloody rituals of a satanic cult add a touch of horror and fear to the story, which is otherwise a typical police crime-solving show.

The story is also about getting back at someone. Every person in the story has a backstory, and everyone has their own reasons for doing their jobs and going after such a dangerous criminal. With some experienced actors working on the project, the acting and cinematography are both up to par.

The series is full of action and suspense, but there are also some big problems. Some of the time, the flashbacks and jumps in time without any labels are hard to follow. But there are only 6 episodes, and if it takes you until 3 or 4 episodes to figure out what happened when, it’s a mistake in the story.

Also, the black fade-out is used too often, which breaks up the story when other transitions could have been used. Even though it’s clear that Millán and Cardona are the story’s main characters, the female characters feel like they’re just there to help the leads get ahead. Also, considering how the series ended, they could have done a better job of drawing their characters.

When it came to the ending, I was honestly surprised and confused most of the time. I had some hints that ‘this’ character was the unseen criminal, but as the show went on, I could no longer think that was the case. But I’m not happy with what I’ve learned about who it is.

“Netflix and chill” can’t be used to describe a TV show like Santo. This is a show that makes you move around and pay attention. If you just watch Santo without paying attention, you might not understand what’s going on. The past and the present are not always in the same order. Sometimes you get a text (Present Day), and sometimes the characters tell you everything (if you know a person has died, and you see them alive, it means you are in the past). So, if you don’t walk with Santo, you’ll end up being upset.

Santo is worth paying attention to. The whole series is like a riddle that slowly makes sense if you hold on to the clues so you can say “Aha!” when you get the whole picture. For example, in one scene, it turns out that someone was caught because their location was sent in a WhatsApp message. Santo is not written in a straight line on purpose. It shows you one event and then tells you what happened before and after that event. In this way, the series keeps its sense of surprise and discovery.

It’s pointless to talk about the story. Santo is best when you don’t know anything about it ahead of time. Just jump in. But here are some small details if you still want something. In the movie Santo, some police officers are trying to catch Santo, who is the leader of a cult. His followers treat him like a god and do bloodthirsty rituals in his name. Who is Santo, though? Is he male or female? Is he a sociopath or god? This name comes up a lot in the story, but this mysterious person never seems like a threat. Santo seems less like a scary boogeyman and more like Mr. X.

One reason for this is that the show puts up a wall around the characters. Santo is so focused on its style that it forgets to connect the audience to the dramatis personae. It’s fun to watch Santo grow and change. But even a sharp-eyed viewer will have a hard time getting attached to any of the characters. Because of this, the ending is less shocking and more frustrating. You find it hard to believe that Santo is who he says he is because (a) there is no clear explanation and (b) this character is still a mystery. Even what happens after the revelation makes you feel confused. Again, we could have solved this problem if we had cared about the characters. Since that’s not there, it’s hard not to think that everything is just an excuse for a second season.

Still, you can’t say that the series would have been better if it had been made in a different way. I just can’t see it as a movie. The only way Santo could have been made was as a TV show. It may have some problems, but unlike most Netflix shows that are just a waste of time, Santo makes every minute worth it by editing the story in such a way that we can only guess where it’s going until the end. This vision of hell, where there is a lot of sex, drugs, and body mutilations, takes away all hope and happiness. Santo is both hard work and a good movie. It’s not afraid of a divided response and is ready for one. Consider me ambivalent.

The case of Cristobal Martinez is being worked on by Officer Milan Miguel. Two men on a motorcycle shot and killed him, then burned his body and took his 8-year-old son, Mario.

Miguel thinks that one of the guys on the motorcycle works for Santo, an international drug lord who just recently got a fake passport and came to Madrid. No one has been able to name him yet because no one has seen his face.

Miguel and his team find Santo’s secret hideout when they are looking for him. Inside, they find undercover cop Cardona locked in a cell. He has worked for Santo for some time now.

Miguel goes to Cardona for help. Santos has put a mark on Cardona, and he doesn’t remember much from when he worked for the drug dealer.

As Miguel and his team look into the case more, they find out that Santo is kind of like a guru who does occult-like things, like sacrificing kids by cutting up their bodies.

As the show’s leads, Ral Arévalo as Miguel Millán and Bruno Gagliasso as Ernesto Cardona don’t do anything out of the ordinary. They turn out to be just like every other police officer we’ve seen in crime shows.

Greta Fernández, who plays Susana “Susi” Jackson, sort of stands out in the show because her character faces off against Arevalo’s.

Last but not least, we have to give it to Victória Guerra as Bárbara Azevedo. Guerra makes every frame she’s in count and keeps you guessing until the end of the show.

The show moves along at a good pace, and adding a supernatural element to the bad guy’s crimes is a good way to start.

There are some really good plot twists in the show, and they often give a lot of information about some of the main characters. These twists or side stories often have something to do with a character’s life.

It’s nice to see that some of the main characters have their own dark sides, even though they are mostly good.

The show tries to be a complicated thriller, but the plot is very hard to follow. Every episode skips ahead in time. There isn’t a good place for these backstories in the episode, so it takes a while for the viewer to figure out where the show is in time.

Some of these backstories could have been skipped or left out without much trouble. Especially in the first episode, where not much is said about the story of the character Cardona.

Instead of explaining what happened, they repeat the same storylines by adding new scenes, which is completely unnecessary.

When Santo tries to add occult rituals to the crimes, it does add something interesting. But because the timelines are wrong, it doesn’t work, even though it’s well-paced.