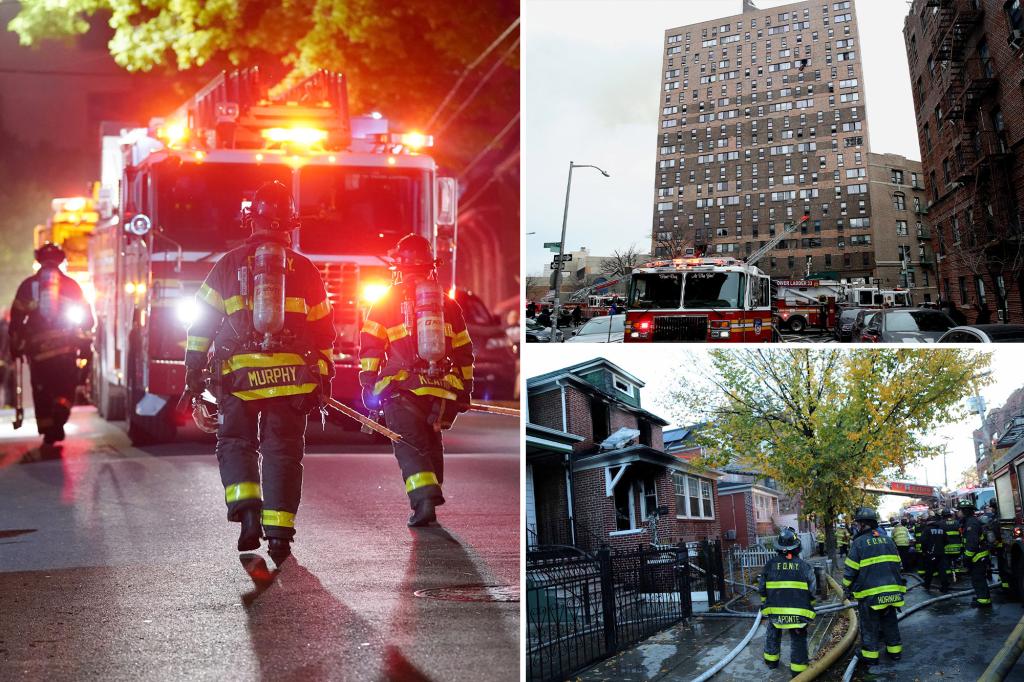 More New Yorkers are dying in fires as FDNY response times continue to surge — and some critics blame progressive policies against cars.

There have been 76 fire-related deaths this year — five more than in all of 2021 — as the FDNY’s average response time to structural fires rose by 2.3%.

From January to mid-September, it took fire trucks an average of 5 minutes and 3 seconds to reach a fire — seven seconds longer than during the same period last year, according to FDNY data.

During the same period in 2019, the FDNY was arriving at structural fires nine seconds faster, in an average of 4 minutes and 54 seconds, even though its fire-call volume was usually higher daily, records show.

“When you see the amount of construction with the bike lanes and those issues in certain areas, you have instances where these long [fire] trucks can no longer make the turn onto or off of a block,” said Andrew Ansbro, president of the Uniform Firefighters Association.

He also said the non-car lanes effectively force fire trucks to set up further away from the curb, reducing how high their ladders can reach.

“If you go 10 feet further away from the building, that’s one less floor,” he said. “You’ve basically put an entire floor of civilians out of reach.”

In September, The Post reported cops and city medics were also taking longer to respond to crimes in progress and medical emergencies.

“In a congested city as ours, we need more lanes, more room to move around,” he said. “De Blasio] did the exact opposite. He cut lanes throughout the city, hence causing a backlog on everything.”

Residents in Jackson Heights, Queens told The Post they witnessed a fire truck barreling down 34th Avenue responding to a medical emergency in September come to a screeching halt after it nearly collided with planters poorly placed within a new tree-lined, 26-block stretch with limited traffic, known as the “Paseo Park” corridor. The near disaster was caught in a 2 1/2-minute video posted on social media.

However, Councilmember Shekar Krishnan (D-Queens), whose district includes Jackson Heights, insisted the new linear park was constructed with input from the Department of Transportation, and the Fire and Police Departments “to improve safety and accessibility for our community.”

“We are already seeing incredible results,” he said.

The Department of Transportation deferred comment to the FDNY.

Citing the Fiscal 2022 Mayor’s Management Report released in September, FDNY officials attributed the increase in response times to higher traffic volume citywide “due to the easing of restrictions related to the coronavirus pandemic.”

They also insisted street closures and other traffic calming measures have not led to the surge.

The FDNY also pointed out that of 76 fire-related deaths this year, 17 occurred in January during a single horrific blaze at a Bronx high-rise apartment complex in which there were no known response delays related to traffic.

However, Councilwoman Joann Ariola (R-Queens), who chairs the fire and emergency management committee, said she believes “open street programs, bike lanes and traffic islands can be a hindrance for emergency vehicles to travel quickly when responding to emergencies — especially when private and commercial vehicles are, often times, illegally parked in those areas.”

“Better enforcement where those conditions exist would help alleviate the log jam,” she said.

Despite Vision Zero’s efforts, an analysis by the advocacy groups Transportation Alternatives and Families for Safe Streets released in April showed 59 people were killed on city streets in traffic-related incidents during the first three months of 2022 — a whopping 44% increase from the same period the previous year.

It was also the highest number of first-quarter fatalities on city streets since at least 2014, when Blasio rolled out Vision Zero.