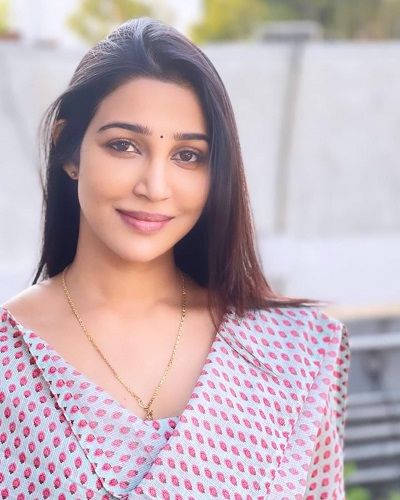 Sheriina Sam is an Indian model, entrepreneur, and actor. She has mainly worked in the South Indian entertainment industry.

Sheriina Sam aka Sherin Sam was born on Sunday, 24 February 1991 (age 31 years; as of 2022) in Kochi, Kerala. She was brought up in Kuwait and Bangalore. Her hometown is Bangalore, Karnataka. Her zodiac sign is Pisces.

She did her schooling at The Indian Community School in Kuwait. She then pursued a Bachelor of Business Management from Bangalore University, Bangalore, Karnataka.

Her father, Sam Symon, runs a business in Kuwait. Her mother’s name is Sally Sam. She has a younger sister named Sheeba Sam.

Sheriina Sam with her parents and sister

Once, while she was shopping at Pantaloons in a mall in Bangalore, she got to know that at the mall the auditions of the beauty pageant Femina Miss South India were going on. Her friends asked her to audition for it. She gave the auditions and got selected. She was among the top 14 contestants in the beauty pageant. During her training sessions for the Femina Miss South India beauty pageant, many designers told her that she would best fit in international modelling. Later, she was called by the Times of India, Mumbai office to audition for Grazia Ford Supermodel of India. She rejected the offer as she was not willing to relocate to Mumbai. Later, when the Times of India officials, arranged accommodation for her, she went to Mumbai and participated in the contest. She then finished as the winner of the Grazia Ford Supermodel of India.

Later, she was selected to represent India at the International Ford Supermodel of the World beauty pageant held in Montenegro, Europe. She was among the top 10 contestants in the pageant. Soon after returning to India from Europe, she started getting offers of print advertisements. Sheriina then appeared in print advertisements for various popular brands like Chennai Skills, Malabar Golds, GV Mills, Swatcha Neelu, and Fashion Equation.

Sheriina Sam in a fashion show

Sam has acted in a few South Indian films like ‘Vyuha’ (Kannada; 2016) and ‘Nippu’ (Telugu; 2012). Later, while she was working with the Indian actor and director Samuthirakani in one of her ads, the director offered her a role in the Tamil film ‘Vinodhaya Sitham.’ The film was released in 2021 on the OTT platform Zee5.

In 2022, she was one of the contestants to participate in the reality TV show ‘Bigg Boss Tamil’ season 6.

She runs two companies in Bangalore. On 3 October 2017, she started Sayara Motors, a car repair and maintenance company, and on 14 December 2018, she started ‘Unique Very Indian’ a photo studio.