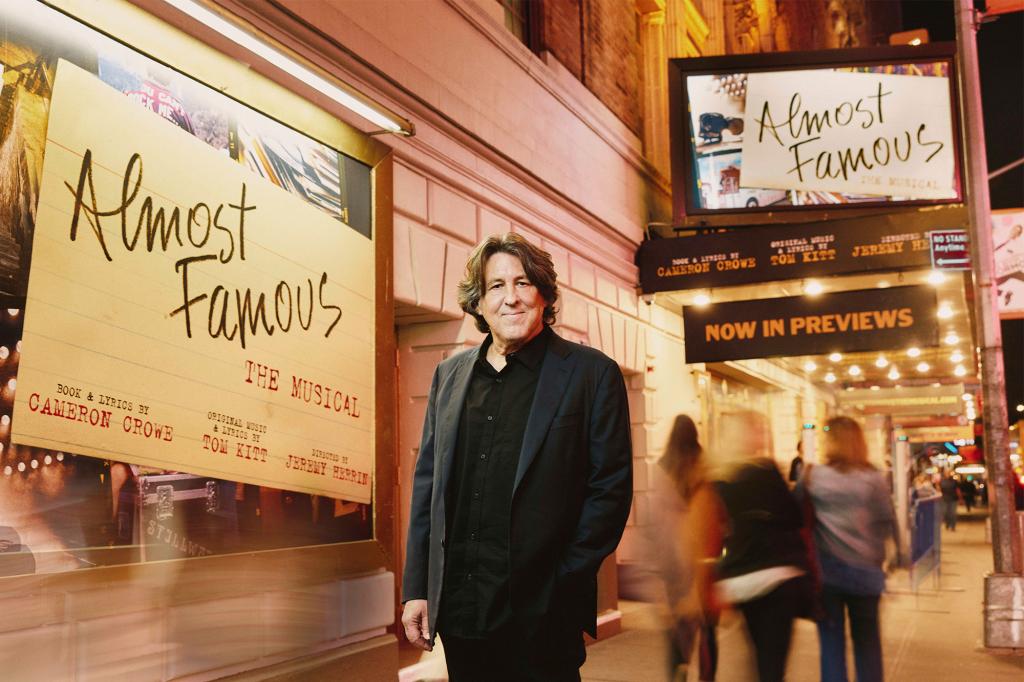 Stars come out for the opening of ‘Almost Famous’ on Broadway

‘Famous’ turn up for show

Elton John sent flowers. Its rocks, socks and jocks audience included R&R’s Joni Mitchell, 78, who NEVER before saw a Broadway show. Plus, Brenda Vaccaro, who once dated Elton’s longtime lyricist Bernie Taupin, and supposedly inspired the song “Tiny Dancer” about his lovelife, and says, “Some details pertain only to me.”

And Tommy Tune, who said: “It’s almost my first time out. I’ve had COVID plus throat treatment. For weeks I couldn’t speak. I’m here because the show’s p.r. man Rick Miramontez is my friend.”

Seated in Row A, almost on the stage itself, one lady wore her face mask the entire time. The show’s cast sang right into her covered face.

Cameron Crowe, who created this show’s original Oscar winner movie starring Billy Crudup, Kate Hudson, Anna Paquin, Philip Seymour Hoffman and Zooey Deschanel years back: “It’s an homage to my mom who raised me. My tip of the hat to her. I want my money to raise up a street named for my mom in San Diego.”

Royalty. Kate Middleton — commoner turned princess turned queen in waiting — and Camilla — mistress who turned the prince then turned his wife then turned Queen Consort — are part of diamond company Leviev’s new collection: two rare stones called “Empresses.” Inspired by these nonroyalty born queens, one called Camilla is a $400,000 6.4-carat emerald shape. Another, christened Catherine (Kate’s real name), is a $328,000 8-carat marquis. Both these two gems got named for both those two gems.

After a devastating three-alarm fire 17 months ago, Morgan’s Brooklyn Barbecue — on Flatbush Avenue — just reopened. Its signature slow-smoked prime brisket, ribs and turkey await you . . . Mike Tyson, Evander Holyfield, Ahmed Sheikh, co-founder of the new Team Combat League, supping together at the Wall Street Grill. Partnership maybe? . . . FYI: They’re saying firebrand Kari Lake is likely to be Arizona’s new governor. They’re saying — and ask not who “they” are — that another likely is she’s on the ticket with Trump in 2024. Forget what you’re saying. This happens to be what they are saying.

A legit situation. This lady and her brother hit a local gin mill for dinner. She orders a dozen spicy chicken wings. They come. The twosome inhales them. As the greasy things get swallowed, this lady’s counting them. The order comes up two short.

She calls over the barkeep.

Burps the saloonkeeper: “Right. Well, we call this the ‘Biden dozen.’ ”

Drugs have become so commonplace that if City Hall should ever open up they may soon consider “urine sampling” a schooltime event. And, lest terrorism affect NYC’s election, our mayor has beefed up security. His message is: All starter pistols will have real bullets.