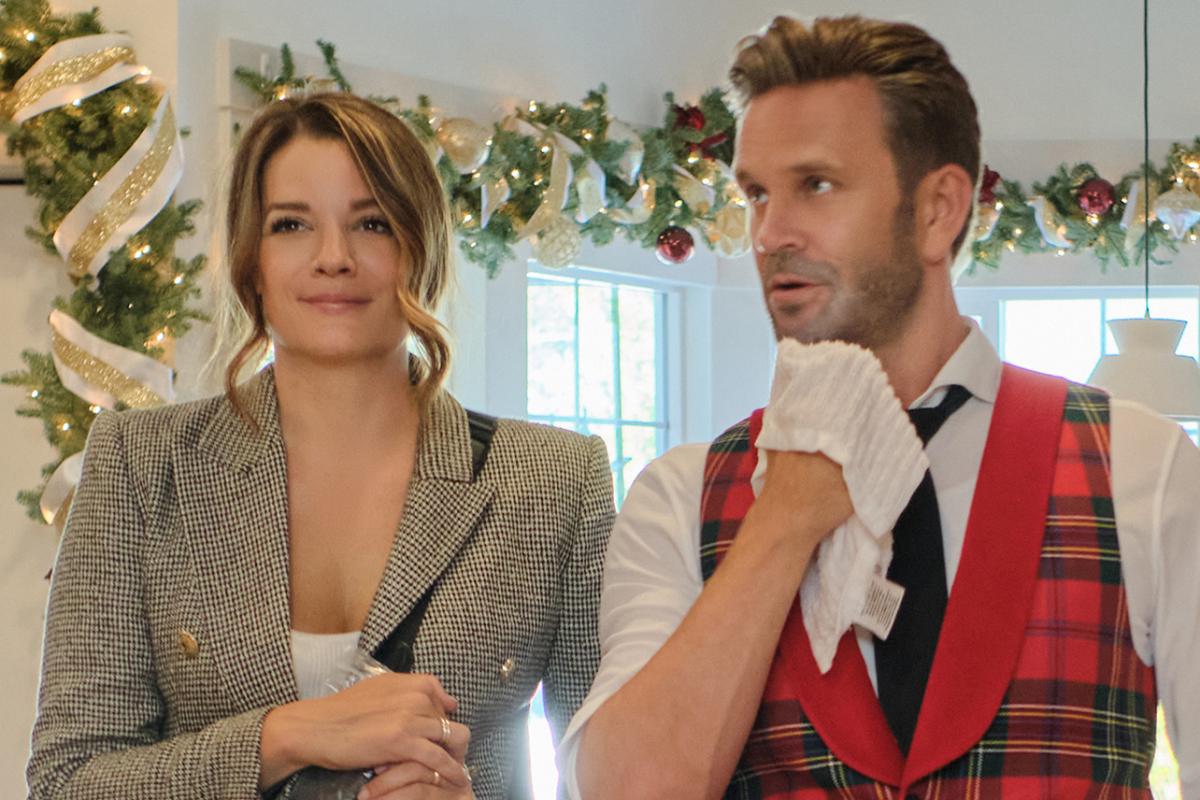 Stream It or Skip It?

Hallmark’s Lights, Camera, Christmas takes a meta approach to the usual holiday romance formula. It’s a Christmas romcom about romance blooming on the set of a Christmas romcom! John Brotherton (The Christmas Contest) plays the film’s quasi-conceited star and Kimberley Sustad (The Nine Kittens of Christmas) plays a local retailer who gets roped into the production as a costume designer. Will this meta movie about a movie get a round of holiday cheers, or does Lights, Camera, Christmas merit two thumbs down?

The Gist: Kimberley Sustad plays Kerry, former fashion designer and current owner of a vintage clothing store. With her business in a rut and rent well past due, Kerry jumps at the chance to sell her entire inventory — including a number of pieces she designed herself — to a Christmas movie that’s filming in her hometown of Twelve Oaks, Colorado. When the movie’s costumer gets poached by a Matt Damon feature, the production brings Kerry on full-time — and you better believe sparks start to fly between her and the film’s handsome leading man and king of Christmas movies, Brad Baxter (John Brotherton). But when opportunity knocks, will Kerry take a chance on dreams she deferred long ago? Or will she get swept up in a Hollywood romance?

What Movies Will It Remind You Of?: The clash of celebrity and regular folk feels reminiscent of this year’s Jennifer Lopez/Owen Wilson romcom Marry Me. Surprisingly, a lot of this film — specifically the dynamic between Sustad and Laura Soltis, who plays her mother — feels like the super smart and off-kilter NBC comedy Great News. But really, Lights, Camera, Christmas delivers moments that are pure old Hollywood, which is really what Hallmark does best.

Performance Worth Watching: In a cast of standouts, you gotta give this to Laura Soltis. Her performance as a holiday movie superfan and perpetually on mom is wonderful and, like I mentioned, reminds me a lot of the great Andrea Martin.

Memorable Dialogue: When Kerry’s mom Nancy lists Brad Baxter’s filmography: The Christmas Clock, Hello Christmas, Chattanooga Christmas, and — the best of the bunch — There’s No Christmas Like Snow Christmas. And the movie within the movie is titled My Favorite Santa, and it’s an exclusive for the streaming service Dazzle+. All of this is perfect parody.

A Holiday Tradition: Twelve Oaks, Colorado caught the attention of a holiday movie production because of its annual tree-lighting ceremony (and the smart maneuvering of a mayor who knows that turning Twelve Oaks into a filming destination will help the local economy).

Two Turtle Doves: In HBO Max’s A Hollywood Christmas (Dec. 1), a director who specializes in holiday romcoms realizes that she’s stuck in a holiday romcom. Sounds like a totally meta double feature is in order a month from now.

Does the Title Make Any Sense?: Yeah, although it is kinda generic. Costuming Christmas or We Wish You a Merry Costume or Walking in a Wardrobe Wonderland — yeah, these are worse than Brad Baxter’s movie titles. The title is solid.

Our Take: Well, this just works. It’s really apparent that Lights, Camera, Christmas is gonna be a different kind of Hallmark movie from the beginning, which is the first part of a framing sequence set a post-screening Q&A with the cast and crew of Dazzle+’s My Favorite Santa. The script’s meta touch is just right, proving that the movie knows how to poke fun at the tropes while still engaging with most of them.

First, I have to give it up to Kimberley Sustad and John Brotherton, two of Hallmark’s heaviest-hitters who elevate what’s already a solid script into something truly endearing. Brotherton plays Brad with a cockiness that feels just as natural as his charm. And, because Brad has a real arc to his story, Brotherton is really able to create a character with the kind of layers you rarely see in these movies.

The same definitely goes for Sustad’s Kerry, whose yearning for opportunities that whizzed by long ago is, uh, extremely relatable and maybe too real for a Hallmark movie. But Sustad, like Brotherton, plays the full range of Kerry’s emotions. She’s smart, she’s put upon, she’s in over her head but she’s making it work!

What’s really special about Lights, Camera, Christmas, though, is the unexpected bond that Kerry and Brad form — and it’s formed not via meet cute or deception or scheme or rivalry, but from these two characters talking and interacting like actual people. They have similar aspirations — aspirations that the movie doesn’t shy away from! This is a Hallmark movie where career opportunities are just as important as romantic ones! Not that the romance is lackluster, not at all. Their date in a living room set on a soundstage made me feel like I was watching Turner Classic Movies for a hot sec.

Lights, Camera, Christmas could have easily earned praise by just riffing on the schmaltzy goofiness of Hallmark movies and relying on Sustad and Brotherton’s incredible chemistry. Instead, it does all of that and gives viewers a little something to think about and feel about.