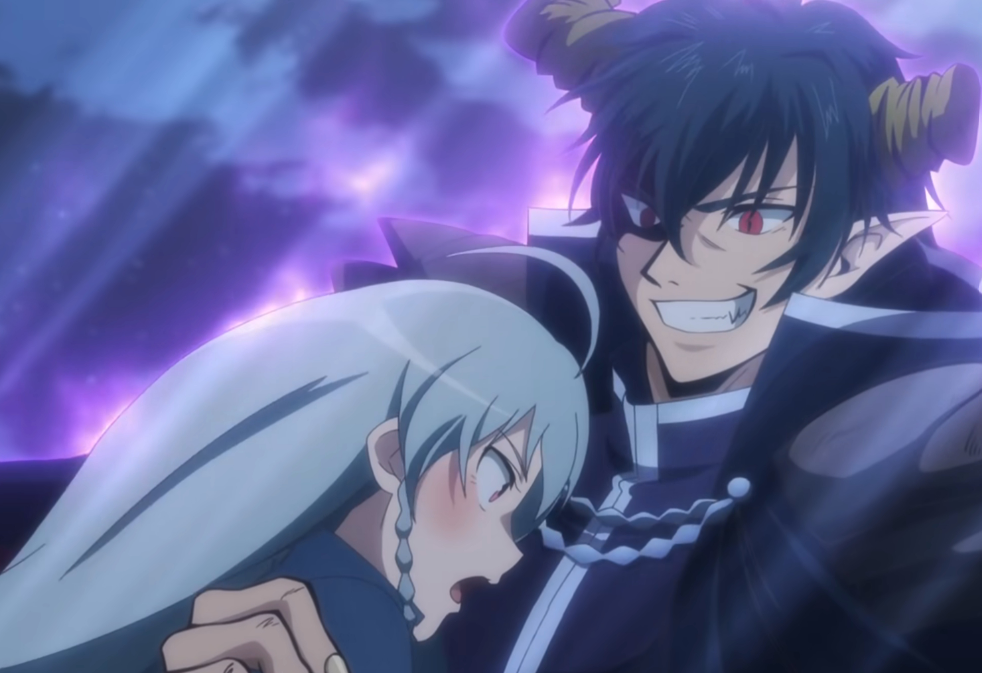 The Devil Is A Part-Timer Season 2 Episode 10 Review: Idiot Box

Since the first season of The Devil Is a Part-Timer came out in 2013 and impressed a lot of people with how the characters grew and the stories were told, it has taken a long time for season 2 to come out.

This season, the team behind Sword Art Online Alternative: Gun Gale Online and Princess Principal, Studio 3Hz, is making the shows. It is being directed by Daisuke Tsukushi, who has worked on shows like Higurashi and My Hero Academia. Hataraku Maou-sama Season 2 Episode 10 is another name for this episode (or Hataraku Maou sama Season 2 Episode 10). Read the review of the last episode of the series by clicking here!

This episode brought back so many memories of the first season of this show that it felt like we were back in 2013. I didn’t watch the show when it first came out, though. I watched it a long time after it came out. But this episode still felt like a trip back in time. This episode was a lot of fun because, once again, it was as close to the real world as it has ever been. Most of the time, that’s how you can tell if an episode will be good.

It began when Emi found out she had a mother she never knew about, which was how the last one ended. This story was first hinted at when we learned that Emi was half-angel and again when she and Alas Ramus met a strange woman in an amusement park. Emi’s character seems like it would have an interesting arc if she went back to her angelic roots while running away from the church. Let’s hope that, unlike some of the show’s other plots, this one is interesting and unpredictable.

After that phone call, Maou and Ashia had one of their usual fights about how to run their demon households. Their conversation was very smooth, natural, and entertaining, and the show made sure to have them act in a way that fit with who they were and what was going on at the time. What is that mess, you might ask? Well, the question was whether Maou could buy a TV for the family with the money he made from his part-time job. This is the kind of slice of life I want to see on the show, so I’m glad we got to see it again. Sometimes the show is very cute, and this was one of those times.

The angel who attacked early in this season because he wanted Alas Ramus and Emi’s sword for himself is up to something else. Lucifer, the usual suspect, was obviously the first person he went after with his “divide and conquer” rule. This led to a very strange and funny conversation about NEETs and their role in society, as well as the different kinds of NEETs. Lucifer was the worst (his words, but you can bet I agree), but for once, his role was surprisingly complex.

This season’s story is breaking up into many different parts that don’t have much in common with each other. Some slice-of-life shows make a living by telling stories like this, but Maou-sama isn’t the best at tying together the plots that aren’t as important as the ones that are. Even though it’s not, a lot of this show seems like it could be skipped, which shouldn’t be the case with any show. Still, this was a cool episode in a cool sequel that’s heading towards a cool ending. It’s hard to want more without coming across as a stickler.

The Devil Is a Part-Timer Season 2 Episode 10 was a great episode with some great slice of life stories that brought the show back to its best days.

In the demon realm, a mysterious woman goes into the Devil King’s castle, which he has left empty, and sends the last living plant to Earth. While Emi is visiting Suzuna, Maou, Alciel, and Urushihara have one of their usual fights about how poor they are. Alciel tries to teach Urushihara how to clean the house after Maou goes to work at MgRonald’s. They feel a strange presence nearby, which then starts to attack them. Chiho wants to go to Maou’s place after their shift, and he reluctantly agrees when it starts to rain and they have to share an umbrella. When the “thing” turns out to be a cockroach, everyone freaks out until Suzuna gets rid of it. All of a sudden, a gate opens up on top of the building, and a big apple comes out of it. Maou and Emi have a fight, which makes Emi want to attack Maou with her Holy Sword, but hands come out of the apple to stop her. When the apple turns into a young girl, they bring her inside. She tells them that her name is Alas Ramus, and when they ask who her father and mother are, she points to Maou and Emi, which completely shocks everyone.

After the revelation, the group tries to figure out what to do about Alas Ramus. They think that because she has an Ente Islan name, she isn’t directly connected to the angels. Maou says that she can stay with them and that they will take care of her. Later, Chiho buys baby supplies for Alas Ramus to help herself feel useful. She is still a little worried that she hasn’t heard back from Maou about what she said after she confessed. Emi talks to Suzuki about what’s going on with her, Maou, and Alas Ramus. As a result, she is given tickets to the Tokyo Big-Egg Town amusement park so that she can go with Suzuki. Chiho and Suzuna take Alas Ramus to see Maou at work. Because of a misunderstanding, this causes a small scandal. The manager, Kisaki, talks to Maou and Chiho and tells them to pay more attention to how they look. Maou thanks Chiho for her help and says he’s sorry he can’t answer her question yet, which is fine with her. Kisaki gives Maou tickets to Tokyo Big-Egg Town, so the group now has 6. Emi agrees to go to the park with Maou, Alas Ramus, and the girl’s friend, Maou, only because the girl insists. Alciel, Chiho, and Suzuki decide to secretly follow the three on their “date” on the day of the trip. In another place, an angel who wants to fix the “Tree of Life” comes in with his army through a gate, and Urushihara can feel it.

Emi asks Maou what he plans to do about Alas Ramus and his remaining troops in the other world at the amusement park. He gives her a vague answer that makes her confused. When they are watching a hero show, a crescent suddenly reappears on Alas Ramus’ forehead, making them leave. After Maou steps away, the mysterious woman with white hair appears, and Alas Ramus’s pain is taken away by using a ring. Emi doesn’t trust her, but she says she’s a friend and warns her not to trust “Gabriel.” When Maou comes back, she disappears. Emi takes him up on the ferris wheel to talk to him about what’s really going on with Alas Ramus. He tells Alas Ramus that the woman with white hair is actually an angel who saved his life because he was the first demon she had ever seen cry. She also told him about the human world and gave him a crescent-shaped seed to take care of, which grew into Alas Ramus. He also realizes that Alas Ramus is a reborn piece of the Tree of Life called “Yesod.” Suzuki, Alciel, and Chiho, who were following the three, lose track of them, and the first two end up on the ferris wheel, which confuses Suzuki. Maou and Emi get a call from Suzuna and Urushihara, who have been captured by Gabriel and his army of angels and want to get back Alas Ramus and Emi’s Holy Sword. Gabriel kills Maou with his power until Chiho stops him and begs him to stop with tears in her eyes. Gabriel doesn’t want to, but he tells them to come back tomorrow. Maou doesn’t know what to do, but he says he wants to fight back in some way and tells Emi to spend the night at their house.

Emi agrees to spend the night with Maou and Alas Ramus after Suzuna tells the group about the role of the Yesod in the Tree of Life and how the angels think its loss will lead to a disaster. Maou tells Alas Ramus a bedtime story that is a loose retelling of his past. Emi tries to use this to question Maou’s decision to invade Ente Isla, but he doesn’t pay attention to her. Emi wakes up the next morning to find Gabriel waiting for her. He still wants to take Alas Ramus and her sword, which has a piece of Yesod in it. Gabriel gets angry when Maou begs him to let her stay. Alas, Ramus stood up for Maou by calling all the gods “liars.” She then used her power to attack Gabriel in the sky, and Emi did the same. Gabriel’s sword breaks Emi’s sword during the fight. Maou comes to help just as Alas Ramus asks Emi if she will always be with Maou, which she says she will. Alas, Ramus saves Maou from dying by stopping him from falling, but then he seems to vanish into the sky. Gabriel is forced to run away when Emi changes into a stronger version of herself. When she comes back to the group, everyone thinks Alas Ramus has been taken away. Emi tells Chiho, though, that during the battle, Alas Ramus merged with her Holy Sword, making them one. She also told Maou a lie to make him understand how painful it is to lose something important. Emi gives her back to him when she sees how upset he is about her disappearance. This makes him very happy. Later, Gabriel talks to Sarue about how he failed. Sarue tells Gabriel that they should look into Emilia’s mother, Lailah, who stole the Yesod in the first place.

Maou finds out all of a sudden that he won’t be able to work at McRonald’s for a while because of renovations. They also need to move out of their apartment so that repairs can be made. Maou and Emi go to Chiho’s house to watch a video tape sent by his landlord, Shiba. On the tape, Shiba tells Maou that her niece needs workers for a beach hut in Chshi who will be paid and given a place to stay. Maou calls the niece to accept the job. Chiho’s mom agrees to let her join them and help them after seeing how much she wants to. Later, Maou and Chiho meet Sarue. He tells them that he turned down Gabriel’s offer to work with him and that he knows where to find the sacred sword. Then, Chiho tells Maou that she wants to get stronger so she can help him as both Maou and the Devil King and make sure that everyone is happy. She decides to go to Chshi with Emi, Suzuna, and Alas Ramus. The girls are going to help/keep an eye on the boys. They meet Amane Ohguro, who shows them the shabby beach hut they are in charge of running. Maou takes over and works to fix it up so that it looks better. Later that night, the group sees bright lights on the horizon. This makes Amane tell the story of the “Mouren Yassa,” a place where ghosts sink more ships to join them. All of a sudden, a scary fog rolls in, forcing everyone inside. Amane feels uneasy as a large figure starts to appear from the fog.