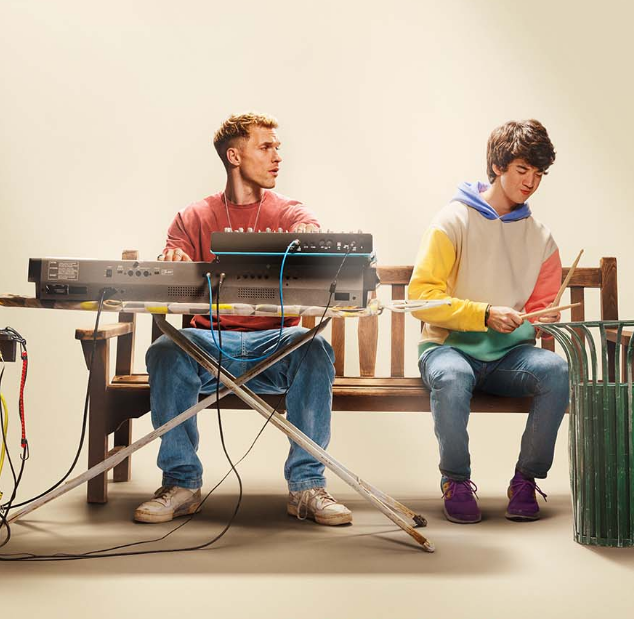 The Netflix Film Is On Two Friends

Review of I Used To Be Famous (2022): The Netflix Film Is On Two Friends

The movie I Used To Be Famous, which is based on the Eddie Sternberg short film of the same name, tells the tale of Vince and Stevie, two guys from very different backgrounds who develop an unexpected friendship.

After a great early career, Vince (Ed Skrien), a former member of a boy band, has now found himself in difficult circumstances. He now performs as a street performer in London to raise money, but despite his prior fame, few people are familiar with him or his abilities.

The likelihood of them both having a happy future is minimal, but Vince realizes that he might have a second chance at stardom because of Stevie’s drumming skills when the young guy joins him for an impromptu jam session and demonstrates his musical ability.

Main Casts Of I Used To Be Famou

Amber agrees to let her kid play with Vince at a gig when Vince convinces her to, but when things go horribly wrong, she prevents him from seeing her son ever again. Vince and Stevie, who both recognize their own potential for musical greatness, find this devastating. However, Vince is able to persuade Amber to reconsider, which gives him the chance to get back in touch with Stevie. But Vince finds himself in a predicament when he is presented with the opportunity to perform alongside a former bandmate who has established a great career.

I won’t give any spoilers here, but if you’re interested in learning more, you may read our post on how the movie ends or watch it yourself. Of course, it’s possible that you care more about the movie’s quality and how it handles autism than its final result.

I’m happy to say that the film, despite a tragic plot point that is a part of Vince’s journey, is a pretty nice one with strong performances from Skrien and Long and a plotline that isn’t overtly emotional. The two leads, who have both had musical careers outside of acting, are responsible for the excellent musical moments.

I’m also pleased to say that I Used to Be Famous treats autism sensitively without offending. Leo Long, who makes his acting debut in the motion picture, is genuinely autistic. He was cast in the proper way because he adds authenticity to the performance rather than relying on the exaggerated tics and twitches that neurotypical performers Maddie Ziegler and Dustin Hoffman displayed when they played autistic characters in Rain Man and Music, respectively. With its erroneous depiction of autistic behaviors, the latter film was particularly unpleasant and was rightfully criticized for its antiquated views on the condition.

Long isn’t the only neurodivergent performer in the film; the filmmaker also selected a number of other neurodivergent performers to play the members of Stevie’s musical therapy group. It’s nice to see a filmmaker make such intelligent casting decisions. As a result, Sternberg has not only avoided allegations of non-authentic casting, but he has also given an actor like Long the chance to demonstrate that persons with autism shouldn’t be neglected due to their handicap.

In his debut performance, the young actor makes an impression, and it may be hoped that he will go on to have a successful and lengthy career as either an actor or a musician (or both).

Nevertheless, despite all of its advantages, the film falls short of its potential in part because the narrative isn’t consistently compelling. For instance, despite warning Vince vehemently to avoid her son, Amber is quick to let him back into Stevie’s life. In a different scenario from the film, Vince is requested to take over as the instructor at Stevie’s music therapy class when he succeeds in helping one of the pupils. The teacher’s fast handover of control to Vince, a new member of the class, doesn’t seem quite credible in this breakthrough scenario.

However, because the relationship between Vince and Stevie is what matters most in this situation, it is simple to overlook these imperfections. Both of them are likable individuals who weren’t created using stereotypes. Therefore, even though some of the narrative lines involving them are implausible, we can still trust in their friendship since they both seem like genuine individuals, not made-up characters.

I Used To Be Famous is a good movie with lots of heartwarming scenes and a tearjerking conclusion. Although the screenplay should have been stronger, the compelling lead performances and the moving narrative make up for that.

How did Vince and Stevie Meet?

When his boy band disbanded, Vince’s musical career came to an end, unlike Austin, a successful former bandmate. Vince now performs music on the streets to make ends meet, but onlookers don’t seem to value his abilities.

When Stevie decides to jam with him on a bench, his luck takes a turn for the better. Stevie plays the bench like a drum, demonstrating his skill as a drummer.

Stevie is the reason that a crowd forms around them, shooting the two performers on their smartphones. When Stevie’s mother, Amber, comes, she yanks him away, but Vince later sees Stevie when he sees him walking into a church hall with his mother.

He first sees Stevie’s music therapy group at this location, where he also gets a second chance to recognize the teen’s gifts. Vince accepts Dia’s invitation to join them and joins in on the group’s drumming session.

Later, Vince finds out that the performances by him and Stevie on the bench in their viral videos. He uses this as a bargaining chip to secure a performance at a neighborhood bar, but because he hasn’t yet invited Stevie to join him onstage, his next move is to win the boy’s favor.

Will the Gig Proceed?

When Vince arrives at Stevie and Amber’s house, he is eventually let inside for tea and jammies. After telling them about the gig, Stevie is thrilled, but protective Amber is less than eager to let Stevie perform in front of a large audience out of concern for her son’s safety.

Stevie experiences a panic episode as a result of Vince and Amber’s argument. Amber is impressed by Vince’s ability to soothe him by imitating the music therapy group’s drumming practice. Because of this, she reluctantly accepts the employment.

Then, as Stevie and Vince practice their upcoming act, Vince learns more about Stevie’s love of music and desire to attend music college.

On the day of the performance, Vince and Stevie take the stage after another act wraps up. The two put on a wonderful performance, but when Vince decides to sing one song too many, some of the audience members become restless. One man is particularly violent, making fun of Stevie’s use of pots and pans as drums.

After retaliating by hitting the man, Vince and Stevie are expelled from the bar. When Austin, who was invited to the performance by Vince, notices his old bandmate getting himself up off the pavement, the humiliating situation becomes much more embarrassing.

After telling Austin to go, Vince goes over to check on Stevie. Unfortunately, Amber is upset and orders Vince to avoid her son at all costs.

Vince Does He Avoid Stevie?

When Vince is informed that he cannot see Stevie, he is devastated and goes back home.

Here, we find out a little bit more about Vince’s past. We witness the amateur band that he and his younger brother Ted created when they were children as he plays home movies of them. Then, through flashbacks, we discover that Ted later passed away and that Vince was unable to visit his brother at the hospital because of his obligations to his band.

Vince approaches his mother to ask for his brother’s harmonica because it is obvious that he still feels bad about what happened. She admits with emotion that she is unsure of its whereabouts.

Stevie makes fliers for their band, “The Tin Men,” and she is able to secure a performance.

Vince receives the good news when Stevie contacts him, but Vince is hesitant to proceed because of Amber’s feelings. Vince later apologizes to Amber for what transpired when he encounters the two of them outside the church after Stevie just instructs Vince to do so.

The three of them attend the music therapy group after he apologizes and Amber shows a little more tolerance for their relationship. As it becomes apparent that Vince has the ability to connect with the pupils, he is invited to lead the group at this point.

When Austin contacts Vince later, Vince has to make another decision after giving the proposition some thought.

Why Did Austin Get in Touch with Vince?

Austin realizes Vince still has what it takes to perform on stage after watching a video of him and Stevie on stage, and he asks Vince if he would like to play a few songs during his farewell tour.

Vince concurs and is thrilled about his second opportunity at stardom, but he becomes discouraged when Dennis, Austin’s producer, informs him that Stevie won’t be joining him onstage.

Vince delivers the awful news to Stevie. Although the young man appears disappointed, he advises Vince to go for it nevertheless because he might not receive another chance to become famous.

Vince, Does He Prefer Fame Over Friendship?

Stevie practices his drums for music college as Vince gets ready for the tour with Austin.

Amber thanks Vince for assisting her son and providing him with the friendship he required after realizing that she was preventing Stevie from achieving his aspirations. She cautions him from approaching Stevie, though, as she doesn’t want him to mislead her son at this point in his life.

One would infer that this would encourage Vince to reject Stevie in favor of the farewell tour with Austin. Later, Dennis hands him a contract, but he chooses to focus on his friendship with Stevie rather than accepting it and seizing his second chance at stardom.

The young man and his mother find pinned-up notices on the street that include directions intended for them on the day of Stevie’s birthday. After obtaining their VIP seats, they are shocked to find Vince because the placards direct them to a small music stage. Stevie is invited on stage after he sings a special song for her. There, they perform with other artists, including those from the music therapy group.

The film abruptly ends, but it is safe to assume that Vince accepted the teaching position that was offered to him and that he kept up his connection with Stevie.