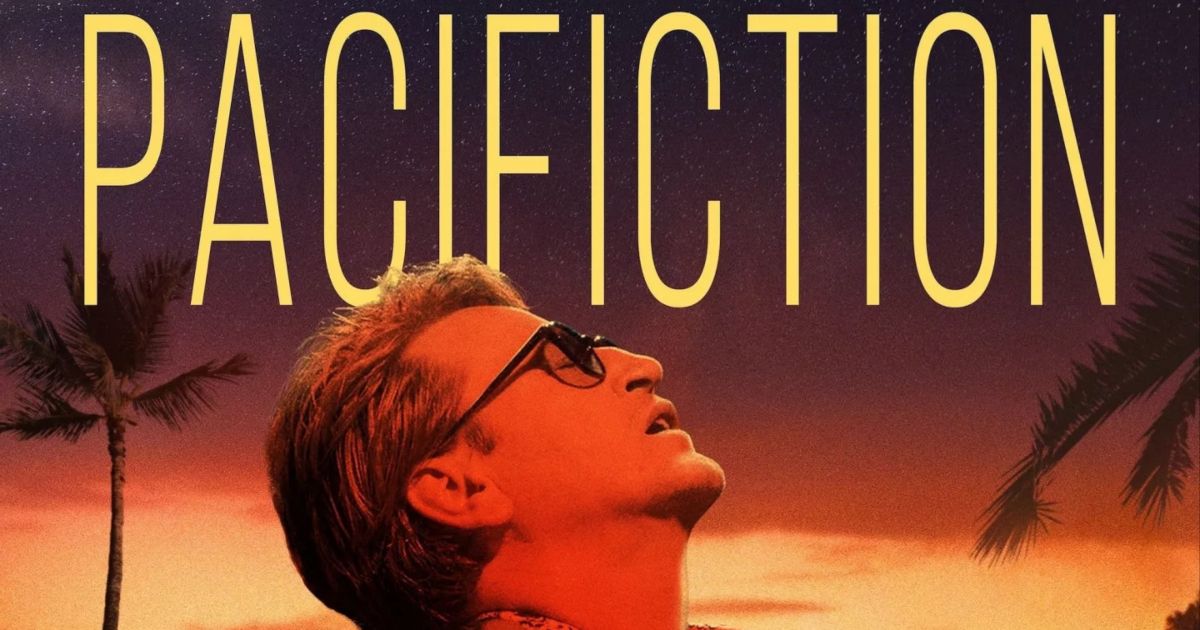 This Movie Will Hypnotize You

“It’s fascinating to film today’s world and I do so without any ideology […] I’m only interested in pictures.” So says Albert Serra in a press statement for his new film Pacifiction. While this is more or less impossible, Serra’s new movie does indeed create something very close to this idea of pure cinema, in which the power of the art form itself supersedes anything else. As he says, “This was our idea: suppress upon editing everything which, as it referred to a social issue, didn’t fit in with pure cinematographic license.”

The resulting film is a truly cryptic but immersive epic that uses the power of cinema to practically put viewers in a trance. Pacifiction wears the skin of a political thriller like The Parallax View or The Conversation, but it’s only a loose garment used to clothe an apparition, a hypnotic and ghostly study of trouble in paradise. It’s a slow and often confounding film, and like true hypnosis, it’s one you must submit to in order to be rewarded.

Nightclubs and Colonialism in the Island Paradise of Pacifiction

Pacifiction follows a government official named De Roller, a name which accurately summons connotations of a ‘high roller.’ De Roller is the High Commissioner of the Republic, a mysterious French diplomat overseeing local affairs in Tahiti and representing the French state. Tahiti is part of French Polynesia, a cluster of islands and atolls which are semi-autonomous in their function and yet are still distinctly influenced by French politics. This contemporary remnant of earlier European colonialism is the often incongruous setting of Pacifiction.

De Roller walks around the island authoritatively, looking like a wealthy Parisian on holiday in his white suit, sunglasses, and smiles, while the Tahitians wear floral shirts and skirts, culturally specific garb, or not much at all. The Frenchman stands out, which is partly his point (De Roller’s and Serra’s). He holds court at a dim nightclub, sitting in the dark with his shades on like a Corey Hart song, answering some questions, giving some advice, and inquiring into local goings-on. Sex work, corruption, and drugs linger in the ambiance of this dank place; it’s all literally shady.

He becomes aware that naval military officers have practically camped out near the coast, hidden by the waves in their submarine. At night, they bring prostitutes from the island onboard the submarine before depositing them back onshore in the morning, sometimes with more bruises and marks than they began with. When De Roller investigates, he becomes ensnared in a larger and much stickier web of political intrigue than he’d imagined.

Aside from being drunk hooligans, the military men in Pacifiction are rumored to be initiating a series of nuclear tests on the island. This understandably disturbs the locals, who have been affected by generations of nuclear fallout — after all, France actually detonated 41 above-ground nuclear weapons in French Polynesia between 1966 and 1974, France blew up 41 nuclear weapons in a series of above-ground tests, exposing 90% of the population to radiation.

Led by a downright apocalyptic admiral (a man so enamored with nuclear holocaust that he makes General Patton look like a pacifist), the military presence haunts the island from their submerged, caliginous depths in the ocean. De Roller begins conversations with various local leaders and attempts to engage the admiral, but slowly realizes that he is just one small, pathetic cog in an unseen machine, a petty bureaucrat whose very life may now be threatened by bigger political forces.

Related: The Best Movies About Politics From the 21st Century, So Far

If all this sounds thrilling, bear in mind — it isn’t, or at least not in the way one would think. Despite its conspiracy thriller intrigue, Pacifiction is a far cry from, say, The Bourne Identity or Enemy of the State; hell, it makes the cold, stark minimalism of Tinker Tailor Soldier Spy seem like a Michael Bay movie. No, Pacifiction is an extremely glacial film that doesn’t get its thrills from suspense or bombastic set pieces, but rather from its truly cinematic, intensely hypnotic construction and fascinating politics.

Politics is a Nightclub in the Hazy Film Pacifiction

Albert Serra may only be in his 40s, but he directs the kind of films a wizened old arthouse master would make, such as Michael Haneke or Béla Tarr. Pacifiction exists somewhere between his previous, death-obsessed films (The Story of My Death, The Death of Louis XIV) and his more recent sex-obsessed one (Liberté), which is appropriate for a film that brings the threat of nuclear Armageddon to the prostitutes and nightclubs of an island paradise. It’s that woozy oscillation between hopeless death and sexy beauty that helps make Pacifiction so entrancing.

Serra’s vision of the island lends itself to a dark fantasy that can’t exist in reality (hence the portmanteau of its title). French Polynesia, almost by definition, is an impossible place, a non-existent paradox of a place, a designation that only placates governments. In reality, just as a hammer cannot be a nail, Tahiti cannot be France (and Puerto Rico cannot be America, et cetera).

Colonialism has attempted to adapt itself over time with more tacit and politically correct terminology and tactics, but Pacifiction points out that this is a logical oxymoron. The film exists in that liminal space in which old imperial politics are rotting away, leaving the festering corpse of ideology to stink up the otherwise paradisaical locales of lands previously occupied.

At one point in the film, De Roller, “Politics is a nightclub.” This concept, simultaneously decadent, cynical, and naive, is illustrated both figuratively and literally throughout Pacifiction. It’s abstract enough to be mysterious, debauched enough to be grotesque, and hopeless enough to be depressing, all while never condescendingly telling audiences, “This is how it is.”

Instead, to quote Serra’s press release again, “Everything is hazy in Pacifiction […] I think that current films tend to be dreadfully explanatory and didactic. I feel as though they’re addressing children who ceaselessly need to have everything explained to them.” Ultimately, Pacifiction becomes a paranoid tone poem, a gorgeous canvas upon which viewers could project their own ideologies.

The Pure Cinema of Albert Serra

Serra edited down 540 hours of footage (180 hours on each Canon Black Magic Pocket camera) into this nearly three-hour long film which, once a viewer has submitted to it, honestly feels like it could go on forever, as if slowly merging with the weird, bleak fantasy that real politics have become. Somehow, without ever making a traditionally stimulating or exciting film, Serra combines every cinematographic tool to practically induce hypnosis.

Outside the Tahitian tones which accompanies certain beautifully edited sequences with relentless percussion, the mostly electronic score from Marc Verdaguer and Joe Robinson is almost subliminally affecting throughout (and even more trancelike when brought to the surface in some almost disturbing nightclub scenes). This wonderfully complements Artur Tort’s photography, which not only captures the vast beauty of the islands but also manages to make it otherworldly at times, occasionally dwarfing the characters in a world much bigger than they could ever know (or at least much more different from what they assumed).

The Wonderful Performances of Pacifiction

The acting (and the extremely unique way in which Serra directs actors, using earpieces and spontaneous dialogue) contributes to the mesmerism. People often speak in riddles here, or with such superficiality that their artifice confesses something more secretive. Whispers and glances dominate the film, escalating the feeling of paranoia and tension, and the entire cast is phenomenal at maintaining Serra’s restrained, mysterious tone.

Benoît Magimel is absolutely wonderful as De Roller, perfectly balancing the haughtiness of a high hierarchical status with curiosity, consideration, and confusion as he digs deeper into his own meaninglessness on the island. He’s a fascinating character, endearing and desperate to transcend his own banality and insignificance (“I instantly spotted in [Magimel] a rarely found capacity to be both genuine and shallow,” said Serra).

Related: These Are Some of the Most Hypnotic Movies of All Time

Pahoa Mahagafanau is an absolute standout here as Shannah, the dancers’ choreographer at the nightclub; incredibly, this is the first and only role for Mahagafanau, a mahu actress who is delightful as one of the few warm and genuinely charming characters in this dark, conspiratorial film.

Pacifiction is Hypnotic But Not For the Easily Bored

Through all of these components gelling seamlessly together, the 160 minutes of Pacifiction casts a spell of pure cinema. It’s been said that no person can be hypnotized if they don’t want to be, and like hypnosis itself, Pacifiction requires the openness (or total submission) of the viewer. Since there is such a thing as hypnotic susceptibility (even Harvard and Stanford have scientific scales for this), there should also be an understanding of ‘cinematic susceptibility,’ or a viewer’s tolerance to pure cinema without much exposition, plot, or drama. Any audience with a high cinematic susceptibility should easily succumb to the hypnosis of Pacifiction.

In order to achieve this, of course, Serra had to strip down every bit of excess fat from political thriller narratives to the extent that even the meat beneath it was ripped off the bones. The filmmaker has butchered the genre in a way that will undoubtedly bore most mainstream moviegoers, but the skeleton he has revealed is a polished, mesmerizing, and atmospheric thing of beauty, a skeletal spell that cinephiles and fans of arthouse films will surely fall under.

From Grasshopper Films and Gratitude Films, Pacifiction is a production of Idéale Audience Group, Andergraun Films, Tamtam Film, and Rosa Filmes, and a co-production of ARTE France Cinéma, Bayerischer Rundfunk, and Archipel Production. After screening at Cannes and the New York Film Festival, Pacifiction will be screening at the Chicago International Film Festival on Oct. 16th and Oct. 22nd before a later, wider release.