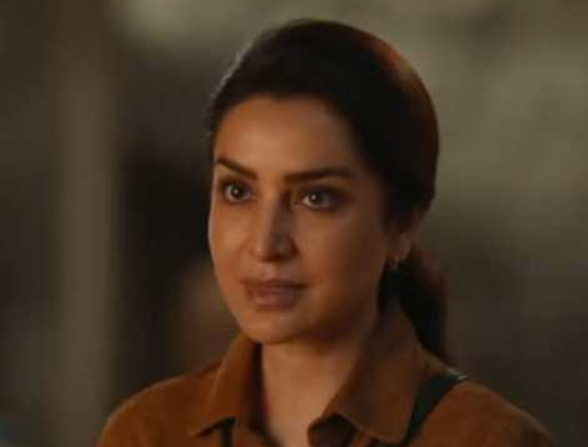 Dahan: Raakan Ka Rahasya is a mystery TV series directed by Vikranth Pawar and stars Tisca Chopra, Rajesh Tailang, Mukesh Tiwari, Saurabh Shukla and Ankur Nayyar, alongside other cast members. The show has 9 episodes, and each one lasts between 45 and 50 minutes.

Even the first episode of Dahan will test how long you can wait. No matter how exciting or mysterious the next 8 episodes are, the first one is so full of explanations that you’ll lose interest halfway through. But when she gets to Shilaspura, Tisca Chopra will make you want to keep watching the show even after these slow episodes.

Shikaspura isn’t that interesting on its own, but the people who made it have made it so mysterious and creepy that you can’t look away. When you add the very creepy background music, you have a strong atmosphere that makes it hard to look away. In this show, the village is a very interesting character, and man, it doesn’t let you down, especially when all of its different parts come together.

Avani Raut, who is played by Tisca Chopra, has her own secrets. We can tell from the first minute that something bad has happened to her and that it still bothers her to this day. Is there something supernatural going on, or is Avani just not thinking straight? You keep asking yourself this as Avani overcomes one obstacle after another.

The fight between old and new is great, and the rivalry between Avani and Pramukh Swaroop (Saurabh Shukla) is fun to watch. Avani is supposed to help the small village grow, but Swaroop is trying hard to stop her. No one knows who will win this fight, and you won’t be able to find out until the end of the show. But before that, you see everyone acting shady and doing things that will make you raise an eyebrow.

Still, Dahan doesn’t do its characters any favors with the way it shows them. None of them are good, and none of them are old enough to understand the complexities of the situation. They always fight and yell about what they want and “development” without looking at what other people want or how these hasty decisions can affect people.

At one point, you also feel like Avani is very tone-deaf and controlling. She doesn’t listen to others and doesn’t believe in respecting their opinions and needs. At first, we see it in little things, but then it starts to show up in bigger parts of her life. It’s interesting how at first she doesn’t care about what will happen, but then, like everyone else, she feels the consequences biting her back hard.

The upcoming supernatural thriller on Disney+ Hotstar called “Dahan – Raakan ka Rahasya” follows the life of an IAS officer and is a dark story about myths and superstitions. Tisca Chopra plays the lead role. The series is directed by Vikranth Pawar and written by Nisarg Mehta, Shiva Bajpai, and Nikhil Nair. It takes place in Shilaspura, a small village also known as “The Land of the Dead,” where strange things happen.
The show is made by Banijay Asia, Deepak Dhar, and Rishi Negi. Rajesh Tailang, Mukesh Tiwari, Saurabh Shukla, Ankur Nayyar, Rohan Joshi, and Lehar Khan are among the actors who are in it.

When asked about any interesting things that have happened to her, actor Tisca Chopra had a story to tell. “I have definitely felt certain energies and had some strange things happen to me that I can’t explain. It was very scary once I got on the Western Express Highway. “Late one night, a terrible accident happened right in front of us. We saw a woman die, but when we went back to look for her body, there was nothing there,” she said.

“Dahan – Raakan ka Rahasya” talks about society and its beliefs and forces its characters to face their deepest and darkest fears. It starts when a mining expedition threatens a village that is said to have a temple that, if hurt, can set off a deadly curse. But an IAS officer goes on a mission to fight superstitions that have been around for a long time and are causing strange deaths and disappearances in the village. The story is set in the unique, rough landscapes of Rajasthan. There are cursed caves, hidden treasures, and secrets that have been passed down for generations.

When faced with ancient myths and superstitions, one IAS officer goes on a quest to find the truth. “Dahan: Raakan Ka Rahasya,” an upcoming supernatural thriller on Disney+ Hotstar starring Tisca Chopra as an IAS officer, is a dark story about myths and superstitions. The series is directed by Vikranth Pawar and written by Nisarg Mehta, Shiva Bajpai, and Nikhil Nair. It takes place in Shilaspura, a small village also known as “The Land of the Dead,” where strange things happen. This nine-episode series will come out on September 16 and was made by Banijay Asia, Deepak Dhar, and Rishi Negi. Rajesh Tailang, Mukesh Tiwari, Saurabh Shukla, Ankur Nayyar, Rohan Joshi, and Lehar Khan are among the actors who will be in it.

The show talks about society and what people believe, and it forces the characters to face their deepest, darkest fears. It starts when a mining expedition threatens a village that is said to have a temple that, if hurt, can set off a deadly curse. But an IAS officer goes on a mission to fight superstitions that have been around for a long time and are causing strange deaths and disappearances in the village. The story is set in the unique, rough landscapes of Rajasthan. There are cursed caves, hidden treasures, and secrets that have been passed down for generations.

Director Vikranth Pawar said this about the show: “With ‘Dahan – Raakan Ka Rahasya,’ we wanted to make a show where people could see how mythical and supernatural elements can work together to scare people. The mysterious feel of this supernatural thriller came from more than just the characters and the plot. The setting was also important. The unique pace of the show keeps people watching until the mystery of Shilaspura is solved. I’m very happy to be working with Disney+ Hotstar to bring this story to life and reach a lot of people.”

Tisca Chopra, who plays an IAS officer, has nothing but good things to say about the show’s story and plot. She said, “What I love most about ‘Dahan – Raakan Ka Rahasya’ is how each character faces his or her own demons with raw fear. My character, Avani Raut, fights personal and professional battles when she is caught between superstition and the supernatural on one side and resin and realism on the other. The show sends the character Avani Raut on a quest by showing how her external and internal fears are similar to those we all have. Getting Dahan and Avani out to the public has been a real joy. I’m very proud to bring this gray character with many layers.”

Veteran actor Saurabh Shukla, who plays Pramukh, gave his thoughts on the show. He said, “Dahan – Raakan Ka Rahasya is a show that carefully weaves together a story of myths, legends, and superstitions. When I play Pramukh, I get to see how the people of the village and the people who live there live by their strong beliefs. This character stands out because he is afraid of what he worships, but he is too scared to break the chain. I can’t wait to see what people think about it.”

Review of the Dahan Web Series: Tisca Chopra is one of the best actors in the Hindi film industry, but moviemakers don’t use her very much and give her very few roles. But Tisca Chopra was able to make her career work because she was given some good roles. Tisca Chopra plays the main role in the web series Dahan, which you can stream on Disney+Hotstar. Let’s find out if this new supernatural series is worth streaming by reading a detailed review of it.

We’ve seen a lot of series in the Romance, Action, Comedy, and Thriller genres so far. The supernatural thriller shows don’t come out very often in any language. Dahan is one of these shows that gives you a new genre to watch, but the way it’s made and the way the scenes are written make it look very dull and don’t have any impact. Even though the scary scenes in a few episodes worked well, we’ve seen these kinds of scenes in a lot of movies, so they don’t thrill us. When we watch all nine episodes in one sitting, only one or two of them are interesting.

When it comes to acting, Tisca Chopra did her best, but the weak writing and making of the show make it impossible for her to do so. Saurabh Shukla is great to look at on screen, and he did a great job. Rajesh Tailang did a good job, and all of the other actors did what they were supposed to do well.

The Dahan series looks average from a technical point of view. The music is fine, and it didn’t make us feel scared when we were watching the scary scenes. Arkodeb Mukherjee is in charge of the cinematography, and in some scenes it looks fine and in other scenes it looks like he’s still a kid. The editing of this show could have been better to make people want to spend 40–45 minutes on each episode.

Director Vikrant Pawar didn’t do as well as he could have in making a thriller that was interesting to watch. But the director deserves credit for the rough way he made a few scenes and for choosing a new genre to show the audience.

Overall, Dahan is a good try, but it fails to get people interested enough to watch all of the episodes.